The Postal Service, as expected, is handling a historic volume of election mail, but has gone to great lengths to ensure that every mail-in ballot gets accounted by Election Day.

The Postal Service has already handled 523 million pieces of election mail — including 100 million ballots — and those figures will continue to climb in the final days leading up the election. That’s a 162% increase compared to levels from the 2016 general election.

Despite this record volume, USPS officials haven’t raised concerns about its capacity to deliver this mail. USPS officials expect that election mail will make up less than 2% of all the mail the agency delivers between mid-September and Election Day.

If every American voted by mail this year, that volume would still be less than that the Postal Service delivers in a single day. Meanwhile, the COVID-19 pandemic has dropped total mail volume by about 20%.

USPS Chief Retail and Delivery Officer Kristin Seaver said the agency’s COVID-19 command response leadership team is monitoring for critical shortages of available employees because of the pandemic and bringing new employees on board as needed.

“The Postal Service is aggressively identifying local areas where hiring is needed, and going to the measures necessary to bring those resources on so that we can we can allow our employees to take the leaves that they need to get through the pandemic,” Seaver said in a briefing Thursday.

USPS has authorized local management to use “extraordinary measures” between Oct. 26 and Nov. 24, which include expedited handling and extra deliveries to accelerate the delivery of ballots.

The agency has also instructed area management to postmark all ballots gathered from collection boxes, and to expedite delivery to the local board of elections, bypassing the normal automation and processing steps the agency would normally complete in an election year.

The USPS briefing comes the same week the USPS inspector general released a report that found the agency USPS didn’t study the impact several operational changes would have on mail delivery and that a word-of-mouth rollout of those changes led to “confusion and inconsistent application” of those changes across the agency’s 600,000-employee workforce.

Those changes include Postmaster General Louis DeJoy’s decision to significantly reduce late and extra trucks between mail processing facilities and post offices, which has led to mail delays and has been the focus of at least a dozen federal lawsuits.

Seaver said the Postal Service had only focused on running its transportation network on time, but didn’t eliminate late and extra trips.

“It establishes that cadence of how we can review information and how all of our employees will be able to decipher that — provide recommendations on how we can reach all 630,000 employees with the same vision and the same message,” USPS Executive Director of Election Mail Justin Glass said.

USPS has stood up a rapid-response hotline that state and local election officials can call if they run into mail-in voting issues that require immediate assistance.

Over the Columbus Day weekend, for example, USPS officials responded to a call about pieces of election mail that had two different destination address in addition to a return address. Glass said in many cases, USPS has been able to resolve the issue without state and election officials having to print new ballots or forms.

“These teams really came together and provided a very quick solution that we were able to get these ballots to the voters without any delay,” Glass said.

Carol Harris, the Inspector in Charge of the National Headquarters, Communications, Governance and Strategy Group at the Postal Inspection Service, said federal law enforcement has put all of its resources into protecting USPS employees, infrastructure and operations in the days leading up to the election. The Department of Homeland Security’s Cybersecurity and Infrastructure Security Agency has designated the USPS network as critical infrastructure.

“It’s a criminal’s worst nightmare, because we’re consistently monitoring for any suspicious behavior or attempts at a criminal attack. And if we detect something, we will take swift action, we will enforce the law, and we will bring a whole of government approach working with our federal, state and local partners to bring that into effect,” Harris said.

Members of Congress, however, have taken issues with USPS and its law enforcement service for refusing to grant tours of local mail processing facilities so close to the election, citing Hatch Act concerns.

Harris said USPS has rejected lawmakers’ requests to visit mail processing facilities in the lead-up to the election, but the agency has offered congressional staff to visit these sites.

“The Postal Service definitely takes its partnership in the reporting nature to Congress very, very seriously, but one thing we also have to balance is there are Hatch Act guidelines that the Postal Service has set forth, that we have to follow,” Harris said.

Rep. Gerry Connolly (D-Va.), chairman of the House Oversight and Reform Committee’s subcommittee on government operations, renewed his request Thursday to visit a mail processing facility in his district.

His letter points to an Office of Special Counsel advisory opinion from 2018 that determined that agencies should prohibit visits to federal facilities for campaign purposes, but clarifies that the Hatch Act doesn’t bar members of Congress from visiting “federal facilities to execute their official, oversight responsibilities to include receiving briefings, tours, or other official information.”

“Oversight of Postal Service operations is more important now than ever, particularly in light of the troubling findings of the Inspector General that actions taken by Postal Service officials slowed postal operations nationwide in the midst of a global pandemic and economic collapse,” Connolly wrote. 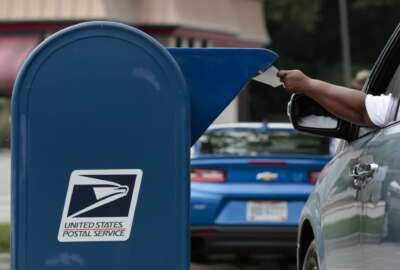