A group of 19 states and the District of Columbia are calling on the Postal Service’s regulator to review the agency’s entire 10-year reform plan.

The states, in a filing Thursday, called on the Postal Regulatory Commission to hold a public hearing and issue an advisory opinion on the “Delivering for America” plan released in March.

The plan outlines $40 billion in USPS capital investments over the next decade, including the acquisition of its next-generation...

A group of 19 states and the District of Columbia are calling on the Postal Service’s regulator to review the agency’s entire 10-year reform plan.

The states, in a filing Thursday, called on the Postal Regulatory Commission to hold a public hearing and issue an advisory opinion on the “Delivering for America” plan released in March.

The plan outlines $40 billion in USPS capital investments over the next decade, including the acquisition of its next-generation vehicle fleet, which will include electric delivery vehicles.

Through a combination of slower delivery standards, increased rates, new sources of revenue and bipartisan postal reform legislation, USPS expects to reverse more than a decade of net losses by 2030.

Attorneys generals warn USPS is implementing the strategy amid “multiple unprecedented changes in the Postal Service’s operations and service,” including increased demand for mail services and the COVID-19 pandemic.

Implementing the full breadth of the plan without a full hearing from the PRC, the states argue, “deprives users of the mail of their statutory rights, and undermines public accountability.”

The PRC already issued two non-binding advisory opinions on key elements of the plan — USPS slowing delivery for nearly 40% of first-class mail and nearly a third of its first-class package service volume.

The commission, in both opinions, said USPS is unlikely to save much money from these changes but warned of its impact on customers. The states, however, argue these are “important but narrow changes that only represent only a small portion of the plan’s scope.”

USPS spokeswoman Kim Frum said the complaint “has no legal or factual merit, and the Postal Service intends to move to dismiss it pursuant to the rules of the Postal Regulatory Commission.”

“The Postal Service has and will continue to follow all statutory and regulatory requirements as we move forward on implementing our strategic plan to restore service excellence and financial sustainability,” Frum said.

Postmaster General Louis DeJoy acknowledged the plan includes “uncomfortable changes” at the last meeting of the USPS Board of Governors, and that the plan has its share of critics.

The USPS inspector general and members of Congress and two of President Joe Biden’s picks to serve on the USPS Board of Governors have cast doubts on the merits of the plan.

Former general counsel for the American Postal Workers Union Anton Hajjar, by contrast, said “there is a whole lot to like” in the 10-year plan, including converting more USPS employees to career status, and investments in a new fleet of delivery vehicles and equipment at processing plants.

However, Hajjar urged USPS to postpone slower delivery standards and to instead focus on other elements of the 10-year plan.

The Senate confirmed Kubayanda in 2019 to serve out the rest of a partial term that expired in November 2020, but commissioners can serve out an additional holdover year if a replacement hasn’t been nominated and confirmed.

Kubyanda, as part of the commission’s advisory opinion, told USPS its plan to slow first-class mail delivery “does not meet the needs of the moment.”

The four largest postal unions, meanwhile, are endorsing plans in the House to accelerate the Postal Service’s acquisition of electric vehicles.

The House Oversight and Reform Committee last month approved a provision in the budget reconciliation package that would give USPS $7 billion to purchase more electric delivery vehicles and set up charging stations.

USPS owns about a third of all federal vehicles, and ranks second only to the Defense Department in terms of the largest vehicle inventory.

Another $5 billion would go to the General Services Administration to purchase over 160,000 electric vehicles and infrastructure like charging stations.

National Postal Mail Handlers Union President Paul Hogrogian said the spending would help USPS catch up to investment already made by its competitors.

“Our private sector counterparts are already committing to electric and low-emission vehicles; it only makes sense that the Postal Service also takes advantage of the efficiency of this fleet,” Hogrogian said.

The National Association of Letter Carriers said “investment in the agency, its workers, and infrastructure is essential.”

“There is no time to wait. America urgently needs to invest in our postal workers, technology, and infrastructure,” the union said. 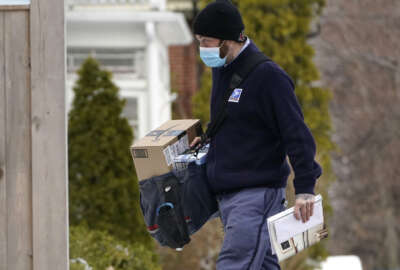