The Postal Service is gearing up to deliver a billion at-home COVID-19 tests to households in the coming weeks on behalf of the Biden administration.

The White House, in a fact sheet released Friday, said households will be able to order free rapid tests through COVIDTests.gov starting Wednesday, Jan. 19, and that tests will ship within 7-to-12...

The Postal Service is gearing up to deliver a billion at-home COVID-19 tests to households in the coming weeks on behalf of the Biden administration.

The White House, in a fact sheet released Friday, said households will be able to order free rapid tests through COVIDTests.gov starting Wednesday, Jan. 19, and that tests will ship within 7-to-12 days of ordering.

A senior administration official told reporters Friday that the White House expects the timeline for shipments will shorten as the program ramps up.

The administration said 500 million tests will be available for households to order when the website launches next week, but will limit orders to four free tests per residential address, “to promote broad access” to tests.

USPS will deliver all orders in the continental United States through its first-class package service and will deliver shipments to Alaska, Hawaii and U.S. territories, as well as shipments to military installations and diplomatic posts, via priority mail.

USPS is also partnering with the U.S. Digital Service (USDS) to provide the digital infrastructure for COVIDTests.gov.

“We didn’t start from scratch.  The Postal Service is an important partner here.  They already have a website that does sell goods to the public and has for quite some time,” a senior administration official said.

The official said USDS has been conducting load tests for the website to ensure it can scale to meet demand. USDS, which was created in 2014 following a rocky launch to HealthCare.gov, also has monitoring tools and response playbooks in place for the website.

“Of course, every website launch comes with some risk.  We’re quite cognizant of that.  But we have the best tech teams across our administration, across USPS who have been working hard to make this a success.  And we think we’re well-positioned to do that,” the senior administration official said.

The administration will also launch a call line for individuals to order tests over the phone, if they’re unable to place an order on the website.

White House Press Secretary Jen Psaki said Thursday that Postal Service leadership “has expressed confidence and an interest in playing the role in delivering tests to people across the country,” and pointed to strong USPS on-time delivery metrics during its peak holiday season as a sign that the agency is up to the task.

“We take them at their word. And certainly, we’re encouraged by the data we saw from December,” Psaki said.

Postmaster General Louis DeJoy, in a meeting of the USPS Board of Governors on Wednesday, said the Biden administration’s plan to deliver these tests via USPS indicates the White House has confidence in the agency’s operations.

“We appreciate the confidence the administration is trusting in us to support this important mission,” DeJoy said.

The American Postal Workers Union signed a memorandum of understanding with USPS management this week that would allow postal clerks covered under the union’s collective bargaining agreement to package and label parcels that contain free COVID tests.

APWU clerks will complete this package fulfillment work, which the memo defines as “new work” for bargaining unit employees, at 43 postal facilities throughout the country.

The memo also gives USPS the flexibility to keep temporary workers on the job beyond its peak holiday season, to ensure the agency has the workforce capacity needed to carry out this project.

The APWU official said the union will represent up to 7,000 temporary workers as part of the bargaining unit during the pilot.

The pilot, according to the memo, started Wednesday and will run for 75 days, unless APWU and USPS both agree to extend it. USPS can also unilaterally terminate the pilot before the 75-day period.

“The parties agree to further discussion on issues concerning this new work pilot as it evolves,” the memo states.

APWU President Mark Dimondstein said the pilot “underscores the invaluable role of the public Postal Service in the lives of the people.”

“It shines a light on the importance of maintaining universal service to every address and person. It opens up the opportunity for similar expanded ‘fulfillment’ work in the future,” Dimondstein said.

USPS, however, is preparing to deliver these at-home tests at a time when its workforce is hampered by its own uptick in COVID-19 cases.

The  APWU official said more than 17,500 employees, by the union’s most recent count, were out of work because of COVID-19 infection or exposure.

That’s a sharp uptick in employees unavailable to work since Dec. 24, when the union estimated about 6,500 employees were unable to work for COVID-related reasons.

USPS is not subject to the Biden administration’s vaccination mandate for the federal workforce, and appears unlikely to implement its own stricter requirements voluntarily.

The Supreme Court on Thursday struck down the Occupational Safety and Health Administration’s vaccine-or-test rule for businesses with more than 100 employees.

Prior to the Supreme Court’s ruling, USPS requested a 120-day temporary exemption from the requirements of OSHA’s Emergency Temporary Standard (ETS).

USPS on Friday declined to comment on the Supreme Court ruling. 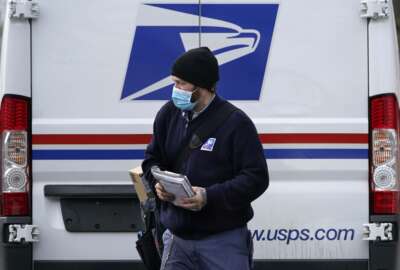 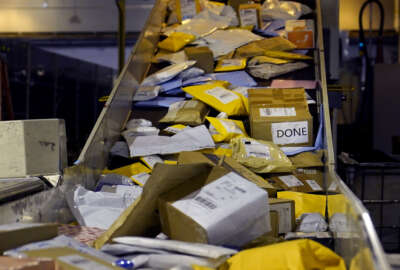