The Postal Service, over the Biden administration’s objections, is moving ahead with plans for gasoline-powered vehicles to make up the vast majority of its next-generation delivery vehicle (NGDV) fleet.

USPS completed the environmental review of its next-generation delivery program Wednesday, and said it will move ahead with its “preferred alternative” plan to purchase up to 148,500 new internal-combustion vehicles over the next decade.

The Postal Service, over the Biden administration’s objections, is moving ahead with plans for gasoline-powered vehicles to make up the vast majority of its next-generation delivery vehicle (NGDV) fleet.

USPS completed the environmental review of its next-generation delivery program Wednesday, and said it will move ahead with its “preferred alternative” plan to purchase up to 148,500 new internal-combustion vehicles over the next decade.

USPS expects electric vehicles will make up at least 10% of its next-generation fleet, but remains open to purchasing more electric vehicles if its finances improve, or if Congress authorizes funding to support its acquisition.

USPS expects its vendor, Oshkosh Defense, will deliver the first 5,000 electric vehicles starting in 2023. The agency said these vehicles will be safer and better for the environment than its current fleet of vehicles.

Postmaster General Louis DeJoy, in a statement, said USPS will continue to pursue additional funding “from either internal or congressional sources” to support the purchase of additional electric vehicles.

“As we have reiterated throughout this process, our commitment to an electric fleet remains ambitious given the pressing vehicle and safety needs of our aging fleet as well as our fragile financial condition,” DeJoy said.

USPS, in its record of decision (ROD) filed in the Federal Register, said it addressed concerns raised by the White House Council on Environmental Quality (CEQ) and the Environmental Protection Agency.

USPS Vice President for Supply Management Mark Guilfoil said the agency received more than 39,000 public comments about its next-generation delivery vehicle fleet. He said USPS also welcomed feedback from the EPA and other agency partners as part of its obligations under the National Environmental Policy Act.

However, USPS said in a press release Wednesday that “there is no legal basis or other basis to delay the NGDV program.”

“As a result of those comments, we included extensions in the process timeline as requested by EPA.  After thorough review and study, we determined that EPA’s request for a supplemental EIS and public hearing would not add value to the Postal Service’s already year-long review. It is also important to note that a supplemental EIS and public hearing are not legally required,” Guilfoil said.

The EPA, however, said Wednesday that USPS’s plans still don’t support the Biden administration’s vision for a zero-emission federal government.

Vicki Arroyo, EPA’s Associate Administrator for Policy, said in a statement that USPS’s plans to purchase tens of thousands of gasoline-powered delivery trucks over the next decade “locks USPS into further oil dependence, air pollution and climate impacts for decades to come, and harms the long-term prospects of our nation’s vital mail provider.”

“The Postal Service’s current course represents a crucial lost opportunity to be a leader in reducing the carbon footprint of one of the largest government fleets in the world,” Arroyo said.

“The environmental analysis also withheld important data, did not disclose specifics of the contract, and underestimated the greenhouse gas emissions of the fleet of new internal combustion engine vehicles. EPA has repeatedly offered to help the Postal Service correct these and other shortcomings in addition to requesting a Supplemental Environmental Impact Statement and a public hearing to inform their decision making,” Arroyo said.

USPS, however, pushed back on EPA’s assessment of its work.

Among its objections, USPS said EPA’s mischaracterized the fuel efficiency of its next-generation delivery vehicles, and said its new vehicles would be “significantly more fuel-efficient.”

USPS said EPA also did not consider the “significant size and weight difference” of the next-generation vehicle design.

The vehicle has a walk-in cargo area meant to support a surge in USPS’s package business. The agency said this design will require fewer trips back to the post office to deliver mail and packages, which would reduce overall greenhouse gas emissions.

USPS, in its record of decision, recognized that a 100% electric vehicle fleet would deliver even greater emission reduction, but said it would be able to order more electric vehicles if more funding becomes available.

USPS said it recently discussed with Congress the possibility of making as much as 70% of its next-generation fleet electric vehicles within a decade, if lawmakers were able to provide the necessary funding.

USPS would have received $6 billion in the Build Back Better Act to invest in more electric vehicles and the necessary infrastructure to charge them. The spending package, however, doesn’t have enough support in the Senate and is unlikely to pass in its current state.e

USPS began its search for a next-generation delivery fleet in 2015. The new vehicles have new features, including air conditioning and heating, 360-degree cameras, advancing braking, airbags and a front-and-rear collision avoidance system.

Despite the Biden administration’s concerns, DeJoy said that “the process needs to keep moving forward.”

“The men and women of the U.S. Postal Service have waited long enough for safer, cleaner vehicles to fulfill on our universal service obligation to deliver to 161 million addresses in all climates and topographies six days per week,” DeJoy said.

The nonprofit Earthjustice said Wednesday it received more than 20,000 comments from individuals through an online portal the nonprofit set up on its website.

Adrian Martinez, a senior attorney on Earthjustice’s Right to Zero campaign, said the USPS environmental review is “founded on suspect calculations, and fails to meet the standards of the law.”

“DeJoy’s plans for the postal fleet will drag us back decades with a truck model that gets laughable fuel economy. We may as well deliver the mail with hummers,” Martinez said in a statement,

The nonprofit said the next-generation delivery vehicle, as designed, weighs just one pound over the threshold that would have made it subject to light-duty vehicle standards. 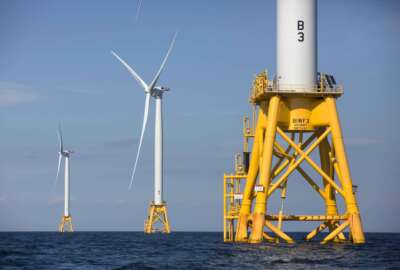