Construction is underway – reconstruction more accurately – at a complex of ancient buildings at the Washington, D.C. Navy Yard, under the auspices of the Naval History and Heritage Command. Operational Archives and Repository Complex. Some of it dating to 1951 will become a modern storage facility. Kristina Giannotta, assistant director for the Histories and Archives division,...

Construction is underway – reconstruction more accurately – at a complex of ancient buildings at the Washington, D.C. Navy Yard, under the auspices of the Naval History and Heritage Command. Operational Archives and Repository Complex. Some of it dating to 1951 will become a modern storage facility. Kristina Giannotta, assistant director for the Histories and Archives division, joined Federal Drive with Tom Temin to talk about the big overhaul.

Tom Temin: “Complex” sounds like multiple buildings, and I can’t believe what they have been able to stuff into the Navy Yard all of these centuries. So tell us what’s going on?

Kristina Giannotta: Well, we are in the process of renovating two buildings, which are adjoined or very closely adjoined to the primary buildings that house the majority of NHHC at this time. So we had these two older buildings which are historically significant and therefore they can’t be raised and rebuilt. So we’re rebuilding them within their original historical context. We have to keep the structure sort of within historical requirements for preservation purposes. These two buildings were basically being used as open warehouses because they were uninhabitable. There was no climate control, nothing within them. So they were just kind of open spaces due to their age and lack of care. So what has happened is the Navy has decided to put resources into renovating those buildings and moving parts of NHHC into those new spaces. So we have several collections within the Naval History and Heritage Command. We have different divisions that have different collections and some of those collections are very sensitive, for example, our rare books or our archival collections. Those collections need appropriate environmental controls. They really should be housed in buildings that are built following library and archival standards. And basically that’s what’s going to happen – this renovation is going to build us a building that will meet archival standards, will meet art standards – our art is also going into this location – and enable us to have appropriate stacks for the material, have appropriate rolling shelving so that we will be able to fit our library and our operational archives into this new facility that’s specifically built for them. And for us, this is very exciting because over the years, while the command has continued to maintain a lot of these precious documents and precious material, we really were not housed in buildings that were built with those environmental controls. They weren’t built for archives, they weren’t built for libraries. So we really had to work around the facilities we’ve been in and this is just going to be a game changer for NHHC.

Tom Temin: Yeah, so basically, what you’ve got is some brick barns that you’re going to turn into modern museums, almost.

Kristina Giannotta: That’s correct. Well, I will call the modern record repositories because it’s not a museum. We’re not putting artifacts in there. We’re putting paper.

Tom Temin: Got it, and it’s fair to say that these are not papers that are just stored away and forgotten, but materials that might be consulted from time to time by current Navy practitioners?

Kristina Giannotta: Absolutely. These records basically are what we use when we are requested to give information to Navy leadership or the fleet, or even Congress. So we get a lot of requests for information about the Navy. And this material is basically the Navy’s institutional memory. And this is the material that we’re mining, when we get these questions. So we will be able to preserve these, we’ll be able to access them better, and we’ll be able to more quickly answer questions that are coming in and more quickly be able to access information in addition to being able to put out and appropriately display some of these more precious items that we have.

Tom Temin: We’re speaking with Dr. Kristina Giannotta. She’s the assistant director of the Histories and Archives Division at the Naval History and Heritage Command. And what kind of square footage are we talking about with these two structures?

Kristina Giannotta: Now this won’t include the shelving but it’s two buildings and what they will be able to do is make these two stories. So you can kind of imagine that’s going to double that square footage. That projects completion we’re expecting 39,580 square feet for building 46, and for building 67 approximately 16,500 square feet.

Tom Temin: Yeah, so you’re getting more out of them than the basic footprint because you can go vertically as well as horizontally.

Kristina Giannotta: Exactly. And we will be having special compact shelving that is going to be specifically designed to fit the collections. So that’s going to also increase the footprint because once you’ve got those compact shelves that you can roll in and out and you’ve got it built to fit the collection we have, that space is even more maximized.

Tom Temin: And what about systems for retrieval and indexing and so forth so that things can be found quickly and retrieved?

Kristina Giannotta: I don’t believe that will be impacted by the new building. All of that information is in our IT systems. What will be improved will be security systems, and the ability to sort of manage some of our more sensitive material.

Tom Temin: Got it, so from a construction standpoint, it sounds like you’re almost building a brand new facility within the walls of what is there to begin with.

Tom Temin: And the old buildings are brick, correct?

Kristina Giannotta: Yes, that is correct.

Tom Temin: That’s kind of a Navy Yard gestalt, is that brick look, going way back.

Tom Temin: Because I’ve had the privilege of going through the Navy Yard a couple of times, and it’s really a nice place and I think unknown to most of the public of how deep and dense and busy it really is in there.

Kristina Giannotta: It is. We just wanted to let you know that the buildings were actually dating to 1852 and 1899. So they are old brick structures.

Tom Temin: But you have determined that they will stand up to what you’re going to do with them?

Kristina Giannotta: Yes, they did all of the research to ensure that the buildings can handle all of the work that’s going to be done.

Tom Temin: But no model ships or ships in bottles will be in there?

Kristina Giannotta: Well, no. What we will have though is our underwater archaeology laboratory will be in there. We mentioned the Monitor earlier. That laboratory will be in there. So there will be a lot of space for them to conserve underwater objects. We will have all of the Navy art departments will be in there, the library and the archives. So as far as having some displays, we probably will. We’re hoping in the library space to be able to have some nice displays of some of the more precious items, but it won’t be like a museum as far as having a lot of artifacts out.

Tom Temin: Just a question about Navy art – this is just my personal curiosity. You know, in the White House, the current occupant, whoever it might be, the family can choose artwork from kind of a repository of White House stored somewhere else. Can an admiral, say, or someone at the Pentagon check out a picture for their tenure and hang it on their wall, and then it goes back to the Navy archives?

Kristina Giannotta: Yes, this isn’t my division but yes, we have a very active art loan and artifact loan program. And in fact, we do have art currently hanging in the White House. And it’s very common right now with the new Sec Nav. We’re providing art for him. It’s very common for us to provide art over for admirals and other people who fit the criteria. We will give them loans for the duration of the time they’re in their office.

Tom Temin: Okay, so I couldn’t get a really good looking carrier shot for my studio, could I?

Kristina Giannotta: Well, from me, you can. We have a very large photo collection, we have about 1.3 million photos that were donated to Naval History and Heritage Command. These are not official Navy photos, which you would get at NARA, but we do do that as well. So if we get requests for images, we can provide images and people can print them out. Generally they’ll print them out themselves and have them framed.

Tom Temin: Cool! And what’s the timeline for this project?

Kristina Giannotta: I believe we are expected to have completion in August of 2022.

Jared Serbu: Dr. Kristina Giannotta is the assistant director for the Histories and Archives Division at the Naval History and Heritage Command. We’ll post this interview along with a link to more information at FederalNewsNetwork.com/FederalDrive. 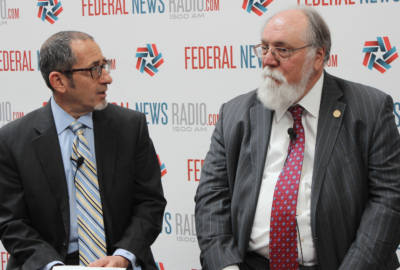