In his first address to staff, the Environmental Protection Agency’s new chief indicated he plans to continue on the same path as his predecessor. Acting Administrator Andrew Wheeler, who succeeded embattled agency head Scott Pruitt, said he would continue the Trump administration’s mission of cleaning up superfund sites and reducing regulatory overreach to “[refocus] EPA on its core responsibilities.”

He also emphasized more continuity in communicating environmental risks to stakeholders around the country during major events.

“I’m not finding fault with what individuals are saying on risk,” he said. “But what I am saying is that we need to be consistent across the board. So it doesn’t matter which region you live in, you’re getting the same information about the same type of environmental risk that you might face in your community.”

Wheeler, who was appointed EPA deputy administrator in October, worked in the EPA’s Office of Pollution Prevention and Toxics during the Clinton and George W. Bush administrations, as well as on the Senate Committee on Environment and Public Works, and the Senate Subcommittee for Clean Air Wetlands and Nuclear Safety.

He also worked at FaegreBD Consulting firm, which advocates on behalf of clients that include fossil fuel and energy companies. While addressing EPA staff on Wednesday, Wheeler acknowledged his years working in the coal industry and said he was proud of the work he did on behalf of securing benefits for miners.

Pruitt resigned as EPA administrator last week amid mounting ethics scandals from his time in the position. In the face of numerous managerial changes, Wheeler said he would try to minimize stress for staff as much as possible.

“I do understand first-hand the stress that goes along with a change in management or a change in reorganization,” he said. 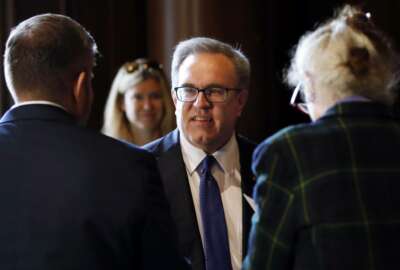