Multiple industry sources say a meeting may be in the works among leaders of both agencies to offer suggestions for how to take the Joint Enterprise Defense Initiative (JEDI) in a...

Multiple industry sources say a meeting may be in the works among leaders of both agencies to offer suggestions for how to take the Joint Enterprise Defense Initiative (JEDI) in a different direction that many believe could lead to better results.

A rumored meeting between GSA and DoD  executives on JEDI spread through industry last week, but multiple sources in government say no such meeting happened.

DoD spokeswoman Heather Babb said “We are not aware of any such meeting. There is no change to the JEDI cloud acquisition strategy.”

A potential meeting could still happen as sources say DoD and GSA have been looking to discuss the approach to JEDI since March.

The real or potential meeting add another level of intrigue to the JEDI effort. First, it means pressure on DoD to reconsider its approach is coming from inside government, and we know GSA works closely with the Office of Management and Budget’s Federal CIO and U.S. Digital Service Office.  Second, GSA could offer DoD assisted acquisition through the FedSIM program, or even try to convince the Pentagon that the Alliant 2 contract or another government-wide acquisition contract (GWAC) could meet their needs altogether and JEDI is a waste of time and money.

In fact, one industry source pointed out that under all the cloud services outlined in the draft RFP for JEDI could be found on existing “best-in-class” contracts that DoD already has access to like Alliant, NASA SEWP and the National Institutes of Health’s CIO-CS. All of these GWACs feature cloud providers ranging from Microsoft to Google to Amazon to Oracle.

Despite maybe some wishful thinking for GSA to attempt to sway DoD’s plans, industry sources say changes to JEDI may come anyway.

The Pentagon said its plan was to release the final request for proposals in May and issue an award by September.

Pentagon Chief Spokesperson Dana White said on May 31 that DoD continues to work on the RFP.

“This is an events-driven RFP. We are enthusiastic,” she said during a press briefing. “So we are working on it, but it’s important that we don’t rush toward failure. This is different for us. We have a lot more players in it. This is something different from some of our other acquisition programs because we do have a great deal of commercial interest. We are going to the commercial sector for it.  So I don’t have a timeline on it, but we are moving, and we also want to take in all of the different stakeholders and consider how we move best forward.”

But as several in industry pointed out, the delay in releasing the RFP isn’t surprising given the interest and scrutiny JEDI has come under.

Over the last month alone, the House Armed Services Committee, the House Oversight and Government Reform Committee, several industry associations and even the new DoD chief information officer weighed in on the approach to JEDI.

DoD CIO Dana Deasy told the House Oversight committee at a hearing on May 23 that based on his experience in the private sector the best way to get value out of moving to the cloud is to rewrite, reengineer applications, which doesn’t necessarily jive with the Pentagon’s initial thinking with JEDI that it would be an infrastructure- and platform-as-a-service offering.

“Part of what I’m looking to do early on is to make sure when we are having a cloud conversation, we are having the right conversations about what we are trying to achieve here,” Deasy said. “Some will be around cost savings, some will be about improving the way we can improve the warfighter and some of it will be about the ways we can improve the stability, sustainability and security of these systems.”

Deasy added that there is no one solution that will solve all problems.

“You will always have a need when you build anything where you will have specific requirements that will be best served by unique providers. That is no different than it has always been the case with technology,” he said.

Deasy said at the hearing that he hasn’t been cleared to participate in any discussions around contracts or solicitations so  he didn’t have a lot of insight into JEDI. Many expect that to change in short order as DoD finalizes the RFP.

But given Deasy’s experience in the private sector, the language in the 2018 and 2019 Defense Authorization bills, a successful protest by Oracle over DoD’s decision to move a contract for cloud services under the Other Transaction Authority (OTA) to full production,  and a lack of broad industry support, it’s no wonder industry experts say it’s not difficult to see that all of this growing pressure will force DoD to rethink its strategy.

The 2019 bill would prohibit “the Department of Defense from using 50 percent of the funds authorized to be appropriated for the JEDI cloud initiative, until the Secretary of Defense provides Congress with information sufficient to conduct oversight of the acquisition.”

The 2018 bill required DoD to submit a report to the committee to justify its approach to JEDI, which it did in early May.

“If you look at all the influential factors that might affect this, you have some pretty critical data points here. [DoD CIO] Dana Deasy is saying no one will lock into a single platform. Then you have Congress adding legislation and they are not happy. You have every major industry group weighing in and it doesn’t make sense. Then you have the OTA protest for pathfinder for JEDI,” said John Weiler, an outspoken critic of DoD’s JEDI approach and vice chairman of the IT-Acquisition Advisory Council (IT-AAC). “You have all these factors so wouldn’t any organization regroup and rethink this? If I was the secretary I would.”

One thing to consider with all of this conjecture and concern is it’s clear DoD isn’t going down a path of a single cloud, and it never said it intended to.

Deputy Defense Secretary Patrick Shanahan said in April JEDI would account for only 10-to-20 percent of DoD’s cloud spend and it would act as a “pathfinder” to modernize legacy systems.

Additionally, the Defense Information Systems Agency is expanding its MilCloud 2.0 offering, particularly in the area of data center consolidation for the “fourth estate,” and issued a draft solicitation for its $7.8 billion Defense Enterprise Office Solutions (DEOS) initiative for unified capabilities including enterprise email and collaboration services in the cloud.

That’s three separate cloud offerings for all the services and agencies to use in the coming years. So why all this concern about a single contract?

As Roger Waldron, the president of the Coalition for Government Procurement, wrote in a blog post on May 25 that DoD continues to send mixed and unrealistic messages about its rationale for JEDI’s approach, and that continues to leave vendors unclear about the plan and raises the anxiety level.

The lack of clarity came through once again in as DoD released on May 31 draft pricing scenarios and answers to vendors’ questions.

Responses to the draft scenarios are due June 6, giving industry less than a week to come up with how it would charge DoD for six assorted and complex scenarios.

One industry source said the pricing scenarios are more prescriptive, as they now focus on infrastructure-as-a-service (IaaS)-based approaches.

“This doesn’t allow the offeror to propose any of the commercial innovation at the platform-as-a-service (PaaS) layer that DoD has repeatedly indicated is the rationale behind JEDI and, specifically, the single-vendor strategy,” said the industry source, who requested anonymity because they didn’t get permission from their company to talk to the media about JEDI. “So why is DoD doing this?  My first-blush thinking is that they are trying to normalize competitors by evaluating them all at the infrastructure layer to make the JEDI competition as close to an ‘apples-to-apples’ comparison as possible in order to minimize the chance of protest. In the context of competing for JEDI, if one vendor is more advanced at the PaaS layer, where most cloud innovation resides and where DoD has justified JEDI, that vendor won’t be advantaged by it.”

So once again, I’ll go back to what I wrote a few weeks ago: DoD’s lack of transparency and communication with industry, the perceived arrogance of those who are planning JEDI and now with the entrance of a new CIO leaves one to wonder if JEDI will crumble under its own weight. 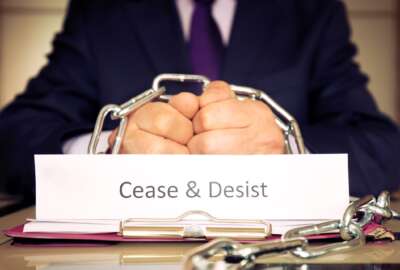