As the Army repositions itself to be a difference service by 2028, it’s taking a page from the Air Force when it comes to training its soldiers.

Or one could say not training. The Army is cutting some training it feels is unnecessary as a means of unburdening soldiers so they can spend more time with their families or focusing on readiness.

“Consistent with the new The Army Vision, the Secretary of the Army has signed memorandums that modify or eliminate certain training requirements to improve the warfighting readiness and lethality of our Army. These memorandums will be captured in an Army directive that will be published this summer. This directive will ensure that existing Army directives and regulations are updated to reflect the Secretary’s guidance,” read a release from Army spokesman Maj. Christopher Ophardt.

The move is something the Air Force undertook toward the end of 2016 for the same reasons and at this point has never looked back.

Soldiers will no longer have to take “travel risk planning system,” “media awareness” or “combating trafficking in persons” training.

Units are no longer responsible for chemical, biological, radiological and nuclear training or counter improvised explosive device training. Information from those courses will be incorporated into units’ mission essential task training as part of the operational environment.

Transgender and suicide prevention training are also no longer required.

A series of nine memos signed by Army Secretary Mark Esper cut back on additional duties as well as training, something the Air Force already experimented with as well.

Soldiers also will be able to skip training on escaping captivity and recovering personnel.

The service is currently experimenting with a 21 week course at Ft. Benning, Georgia and plans to expand it to certain one-station unit training courses in the future. The Army has the highest number of nondeployable troops of any service due to obesity. The extra training will also help keep talented individuals who are not as active in better shape.

“This generation has an incredible facility with electronics, with software and all that,” Esper said at the Brookings Institution last week. “On the other hand they may not be coming in as physically fit as previous generations for one reason or another. That’s one reason we’re looking at an extended basic training.”

Esper added the training will also increase the readiness and lethality of the total force. The Army is preparing its soldiers to fight in new areas, particularly in high-intensity conflict in urban areas with electronically degraded environments.

The Air Force is fairly deep into its training cut and even went further in February by cutting transition assistance program training for airmen in the reserves.

“After having heard a lot of these concerns and just given the pressure in terms of manpower that we have in the Air Force and the increasing demand for what the Air Force does … the focus was ‘How do we provide an opportunity to give a little bit more white space on the calendar to give these individual Airmen to do the work they were brought in to do: supporting our mission?’” Gabe Camarillo, Air Force assistant secretary for manpower and reserve affairs told Federal News Radio. “It’s a concern not only to every individual airman that we hear from, it’s also a concern from a readiness perspective.”

Over the years as civilian jobs have been cut and the Air Force has downsized, more duties like custodial work and safety management have fallen to airmen.

Additional training has also piled up over the years.

The Air Force took some steps last year to cut some training and duties.

The Air Force released a list of the courses that will be eliminated or streamlined. A computer-based, 20-minute training course providing an introduction to the role of the Inspector General got the ax.

The service continually reviews training and duties that may be unneeded. 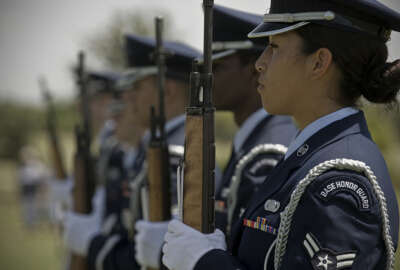