The nation needed thousands more of them than the original contractor could build. So, another manufacturer, from a different industrial domain, built a big factory, installed the tooling, and started turning them out — all in record time.

The resulting extra capacity helped turn back the national emergency.

The nation needed thousands more of them than the original contractor could build. So, another manufacturer, from a different industrial domain, built a big factory, installed the tooling, and started turning them out — all in record time.

The resulting extra capacity helped turn back the national emergency.

The product needed? B-24 “Liberator” bombers, the ungainly-looking, four-engine workhorses that helped the United States win World War II. Despite its best efforts, designer and prime contract Consolidated Aircraft simply couldn’t build them fast enough. The government enlisted Ford Motor Company. Within 18 months Ford build a factory with square footage nearly that of the Pentagon and started turning out copies. Several other companies joined in, too.

In unusual times, the government has been both a source of demand and an instigator of industrial change.

Now we’re seeing the same thing again with ventilators, an industrial product in short supply. Ford Motor and a latter-day General Motors, both of which have suspended North American automobile production, are jumping into ventilator production. This isn’t private-sector altruism in total. The Trump administration dusted off the Defense Production Act to help things along.

There’s a bit of historical parallelism going on in the coronavirus pandemic, particularly in the government turning to auto makers.  A Ford F-150  resembles a ventilator less than a ’42 Ford Super Deluxe resembled a B-24. The bombers at least had elements that cars have; they burned gasoline, had rubber tires, were made of metal (although planes were mostly aluminum, cars steel). As a matter of historical record, the startup of Ford’s production of the planes was a lot rockier than you’d realize from the Ford Motor Company official account.

Yet ventilators Ford will produce. The company says it’ll make at least 50,000 of them within 100 days. The machines will be copies of an existing and FDA-approved design from Airon Corporation. The design is licensed to GE Healthcare. Ford will make the devices at a parts factory in Ypilanti, Michigan, not far from the now-demolished Willow Run factory where it made the bombers. The machine Ford is building operates on pneumatic pressure, not electricity.

In the meantime, the government has already awarded contracts for something like 160,000 conventional machines from nine manufacturers — including Ford rival General Motors — to the tune of $2.5 billion.

That’s one approach to government getting what it needs in times of national stress.

By contrast, the Army of today is out of the bomber buying business. But its large medical establishment is in the midst of another search for ventilators. It’s xTech Covid-19 Ventilator Challenge will potentially produce benefits long after the pandemic is passed. The challenges occurs under the office of the Assistant Secretary of the Army for Acquisition, Logistics and Technology.

He didn’t use the word revolutionize, but when I spoke with Col. Matt Clark, the project medical director, I got the sense that’s what the Army would like to do to the ventilator market. Not increase capacity of the industry as it is now constituted, but rather to disrupt it.

Ventilation is a complex medical procedure, with many situations, procedures and variables, Clark explained.

Sometimes people need a pair of little tubes just inside their nostrils with oxygen. Sometimes they need a tube stuck down into their trachea under sedation where the machine takes over autonomic breathing. Some ventilators are the size of a lunch box. Others are PC-server sized on metal roll-about carts. Some are designed for children and babies.

Whatever they do, ventilators are expensive, at least those suitable for “industrial” use by EMTs, hospitals and other licensed settings. An FDA-approved machine can cost from $5,000 to $50,000. The Army is seeking a low cost solution it can afford in quantities. But it wants reliable, safe machines for which the challenge winners can obtain FDA approval.

The Army isn’t alone. A team at MIT also has launched what it calls an Emergency Ventilator Project, hoping to create an open source design for life-and-death situation devices. The spur to innovation is attached to many boots. But they don’t all have the Army’s buying power. 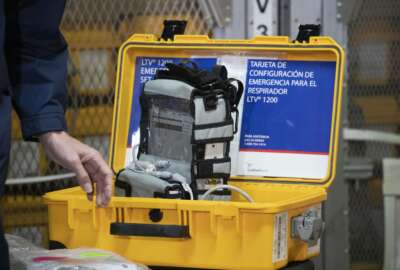