Thoughts on the military-industrial complex all under one roof

If you saw a LTAMDS for the first time, you would be astonished at its sheer size, and by how hard it is to figure out what it does based on its appearance. LTAMDS stands for Lower Tier Air and Missile Defense Sensor. At the just-concluded Association of U.S. Army conference and trade show, Raytheon Missiles and Defense dragged an LTAMDS unit, or at least the shell of one, into the Washington Convention Center.

If you saw a LTAMDS for the first time, you would be astonished at its sheer size, and by how hard it is to figure out what it does based on its appearance. LTAMDS stands for Lower Tier Air and Missile Defense Sensor. At the just-concluded Association of U.S. Army conference and trade show, Raytheon Missiles and Defense dragged an LTAMDS unit, or at least the shell of one, into the Washington Convention Center.

Longer, wider and higher than the biggest tractor-trailer combo, the enormous, green-painted machine dwarfed the people and other displays nearby. Raytheon is a contractor for the Army’s program — LTAMDS — to establish radar detection of the latest potential threats, including hypersonic missiles. The program is late and over budget, according to Defense News, but the latest Army plan is to receive four working LTAMDS by the end of next year. Regardless of the electronics inside the LTAMDS, I couldn’t help being amazed by the mechanical engineering. The equipment looked almost like one of those pop-out RV trailers having undergone a Hulk transformation.

The AUSA show floor sported lots of pieces of big gear. Our Federal News Network booth, where I recorded interviews with Army generals amounting to 12 stars, stood hard by a rakishly-painted AbramsX tank. This, too, was a prototype General Dynamics hopes the Army will bite on as a way to extend the life of the venerable Abrams platform. It sports hybrid-electric power and unmanned capabilities. A General Dynamics staff guy kept polishing its surface. He couldn’t keep up with the hundreds of grown men who stopped to admire and lay hands on this impressive toy. The AUSA show floor is predominately males traipsing the aisles, although booth staffing looked to be about 50-50.

Above all, my impression from AUSA is of the immensity of the military-industrial complex. I say this without judgement. Having not been born yesterday but rather having studied federal affairs for 30 years, I understand the military budget, the military’s place in the American economy, the strengths and challenges of how the military buys stuff.

AUSA exhibits also show the wide internationality of the weapons businesses. Countries from Australia to Israel to Norway have surprising defense manufacturing capabilities. They make not just electronics and small arms, but also heavy land platforms and things like missile launchers. An Israeli company called Flyer Defense, for example, showed a ground mobility vehicle used by U.S. Special Operations. The stubby vehicle fits in the hold of a CH-47 helicopter.

Small, unmanned aircraft appeared throughout the show floor. A German company, Quantum Systems, displayed an airplane-shaped drone designed for surveillance and mapping. At about two feet long, it can take off vertically. How? By virtue of how its motors — about as big across as a half-dollar — and props swivel to a helicopter-like position, like the engines on the familiar V-22. A spokeswoman at the booth said the company has had interest in the good-looking drone from law enforcement and firefighting agencies. But she said the flyer is a bit pricey for local agencies.

Military operations don’t favor the delicate. Panasonic showed a ruggedized Android smart phone, housed in an indestructible-looking plastic case. The device is designed to be mounted on a soldier’s chest harness, where it flips down for viewing the situation and communicating with other soldiers.

Only select vendors took advantage of the opportunity to give away lethality-oriented tchotckes. Like key chains with tiny plastic pistols from Glock. A couple of places had pens, the caps of which formed tanks.

Trade exhibitions tend to be tribal affairs. A relatively small group of people actually make decisions on which armored vehicle, or which rifle, or which helmet the Army, or any military branch, actually buys. Yet thousands of people, like me, wander through the booths. They kick tires — in this case, can literally — peer at enormous engines and missiles, and heft pistols and automatic rifles.

So, yes, we’ve got a big military-industrial complex. It can be sluggish, expensive and self-serving. Yet seeing pieces ranging in size from LTAMDS to a shiny brass bullet, you also get reminded that war is real, so the nation needs the gear necessary to win. 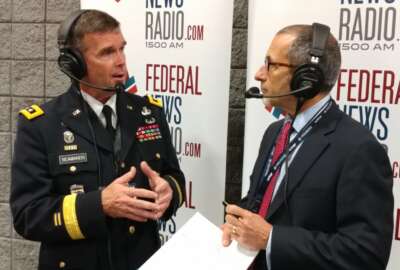 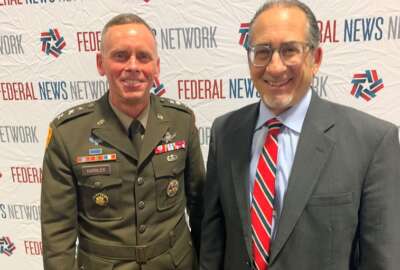 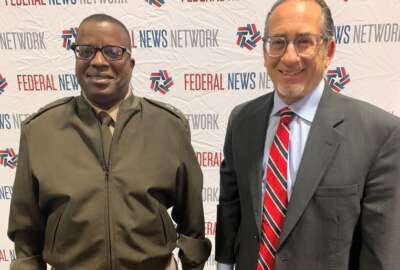 How the Army stays supplied