Recreational therapists give blind veterans a new look on life

Playing golf blind may seem like the beginning of an old country club joke. But it’s no joke to the veterans at Edward Hines Jr. VA Hospital in Hines, Illinois.

In fact, the hospital in Hines helps about 30 veterans at a time live life to the fullest, without being hampered by their disability.

As part of Federal News Radio’s look into some of the more unusual jobs in government, Melissa Winter, a recreation therapist at Edward Hines Hospital shared some of the joys and challenges of her job working with blind veterans.

“I have no average day,” Winter said. “Yesterday I went to a White Sox game with the veterans, I took 100 people there and I’m going water skiing this week and golfing. Next week we have horseback riding, we’re going on an architectural boat tour.

All those activities are ways to show veterans that even though they have disabilities that it shouldn’t stop them from going out and living the life they want.

Winter, who has been on the job for five years, said many of her clients are veterans who lost their vision later in life due to an illness. Some, however, have lost their sight from operations overseas.

As veterans’ eyesight decreases, their level of activity decreases with it, Winter said.

“It’s for a number of reasons. Transportation, because they can’t drive anymore and also it could be for mental health reasons. They are depressed, they feel like they aren’t motivated anymore, they don’t feel like going out anymore with their families or they just don’t know what to do anymore because of that vision impairment,” Winter said.

Edward Hines’ Hospital’s program, which is an inpatient program, has changed the way some of those veterans feel about their lives.

Horseback riding is one activity sponsored by the hospital that caused veterans to find their spark.

“A gentleman who was totally blind in his sixties and he’d never been horseback riding, never touched a horse before and I got to say ‘Just put your hand out there, take a step forward’ and he just touched a horse for the first time,” Winter said. “He just pet that horse and he couldn’t believe how big he was, how muscular he felt and just kind of connected with the horse based off of touching him first.”

Winter said a female veteran who was reticent at first found solace in brushing the tail of a horse. Winter likened it to brushing one of her girlfriends’ hair.

Other veterans have found their internal wounds soothed by connecting with an animal instead of talking to therapists or family members that can’t relate with their wartime experiences.

Of course other activities have helped heal some veteran’s wounds as well. One veteran told Winter he was done feeling sorry for himself and not being active. Her work allowed him to live life to the fullest again.

“I love when the guys come in here and they are newly blind and I tell them we are going golfing and I ask them if they want to go and they think I’m crazy. They say ‘Lady, I’m blind I can’t golf,’” Winter said.

The hospital has volunteer caddies who drive the veterans around in golf carts. The caddies tell the veterans how far the hole is and line them up in the right direction. The veterans let the caddies know what club they want to use.

“Usually as long as you have them lined up pretty well the individual can hit the ball and then the hardest part is for you to go out and find the ball for them after they’ve hit it,” Winter said. 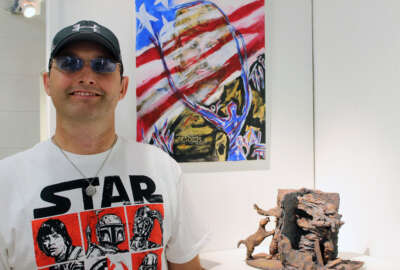