To many, the security clearance process remains frustrating and arduous. But over the last year, there have been some subtle, but important changes.

As House Oversight and Government Reform Committee lawmakers likely will find out Feb. 2 at a hearing, the lead agencies, the Office of Personnel Management, the Defense Department and the Office of the Director of National Intelligence took steps in 2016 that officials expect to pay dividends this year in reforming and...

To many, the security clearance process remains frustrating and arduous. But over the last year, there have been some subtle, but important changes.

As House Oversight and Government Reform Committee lawmakers likely will find out Feb. 2 at a hearing, the lead agencies, the Office of Personnel Management, the Defense Department and the Office of the Director of National Intelligence took steps in 2016 that officials expect to pay dividends this year in reforming and improving the security clearance process.

“Not every security clearance holder and every security clearance are equal. We’ve come to the understanding and we’ve come to the process of identifying ways to effectively prioritize that your security clearance and you are more important than mine so you should go first, and that you should get polygraphed first and I should stay second,” Evanina said in an exclusive interview with Federal News Radio. “Then what we do is we have leveraged some of the tools we have to say, ‘Bill versus Bob, Bill is in a higher position, but Bob has more access to data so we have to prioritize that.’ We’ve done a really good job in 2016 across the government identifying those thresholds.”

He said the government always did prioritization, but not every agency followed the same processes. Now, he said, especially in wake of incidents ranging from Edward Snowden to Chelsea Manning to former National Security Agency contractor Harold Martin, agencies need to be more consistent in how they prioritize which employees get security clearances.

“We want to ensure that not only is everybody doing it in the right manner, but we have reciprocity so that the DoD employee, the OPM employee or the FBI employee are all cleared equally and there is reciprocity across the board,” Evanina said. “I think the prioritization as long as it’s standard across the board, then we can ensure we get maximum efficiencies and reduce the backlog.”

While the NBIB is working with DoD to improve its technology systems—DoD chief information officer Terry Havlorsen is scheduled to testify at the Feb. 2 hearing—another way to address the backlog is for agencies to trust each other.

There are plenty of anecdotes where an employee goes from one agency to another and has to go through the security clearance process all over again even though their investigation remains in good standing.

Evanina said with stories about reciprocity, while they may be true for that individual, statistics tell a different story.

“We did a really good look this year about reciprocity, what’s the urban legend versus the reality? What we identified was we are somewhere around 86 percent-to-87 percent in terms of reciprocity across the government. I think it’s a great number,” he said. “The numbers show out over the last few years that the lack of reciprocity was fake news.”

Evanina said many times agencies are looking at new information since the employee’s last polygraph or last investigation, and not doing an entire reinvestigation.

He said he believes most of the “noise” or complaints about a lack of reciprocity come from those people who need partial reinvestigations, which can take longer.

The reciprocity study is helping to shape the NBIB and its focus areas. Evanina said his office’s role in helping to stand up and mature the NBIB, which officially launched Oct. 1, is being part of the Performance Accountability Council—along with OPM, OMB and ODNI—to oversee and develop policy and reforms.

“There has to be some accountability and when we looked at the accountability, responsibility and having a director who owns that program was a critical aspect,” he said. “I think the NBIB’s growth this past year has been dramatic not only in setting up the structure, but already being big players in the process, which allows them to have an optic on background investigations that are separate and distinct from the bigger mission of OPM.”

President Barack Obama also issued an executive order on Jan. 17 amending the governance structure and processes for issuing federal security clearances, as well as suitability and fitness status for employment. The order also more clearly outlines the OPM’s responsibilities in this process under the NBIB.

He said the NCSC drives the standards and policies for security clearance processes, including polygraphs or how the investigators do their jobs.

“From our perspective, to be able to drive and ensure that across the board we are doing things commensurate with each other not only drives that same reciprocity, but when it comes time to affecting true continuous evaluation that we need to ensure at the end of the day we are all doing things fairly similar,” Evanina said.

One of those policies that came in 2016 was Senior Agency Directive 5, which let investigators officially use social media platforms to collect publicly available information about an employee who is getting a new or getting their current security clearance updated.

OPM was scheduled in October to start to test out how to conduct automated social media site searches as part of the security clearance process.

Evanina said the data on social media clearly is useful for adjudication purposes. But at the same time, ODNI put in place privacy and civil liberties safeguards.

“If you post anything on Facebook or Twitter that is political, it’s irrelevant to your security clearance. If you post anything that is protected by any type of class in the United States, it’s irrelevant,” he said. “If you post in there a hate issue or connotation of criminal activity, all that allows us to do is set a lead for someone to further investigate. It’s no different than if we got information from your neighbor that you were conducting illegal activity in your background. It wouldn’t make you ineligible, but it would set a lead.”

Evanina said social media is one of many, many places investigators look for information about a person who is getting a security clearance.

“There has been some relief in the government from investigators that they are now, officially from a policy perspective, they are allowed to look at social media when doing background investigations. Historically it wasn’t against the law, but there wasn’t a national policy,” he said. “For those who were maybe against this idea early on, I think we’ve alleviated some of their fears that we have safeguards in place. The smell test to be able to say we have looked at your social media has really saved the day for us.” 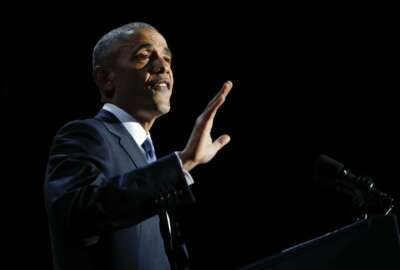