The Environmental Protection Agency, already at its lowest staffing level since the Reagan administration, could see another round of buyouts and early retirements next fiscal year.

“The legislation supports the president’s proposal to reshape the agency’s workforce by providing resources requested to...

The Environmental Protection Agency, already at its lowest staffing level since the Reagan administration, could see another round of buyouts and early retirements next fiscal year.

“The legislation supports the president’s proposal to reshape the agency’s workforce by providing resources requested to offer buyouts and voluntary separation agreements to employees,” the committee said in a summary of the bill in May.

In a meeting with reporters on Wednesday, John O’Grady, the president of the American Federation of Government Employees Council 238, which represents EPA employees, said the latest round of buyouts could lead to the departure of an additional 1,000 employees.

“Believe me, they would leave the agency,” O’Grady said Wednesday at the National Press Club.

The agency’s headcount has slowly declined over several administrations. When President Barack Obama came into office in 2009, the EPA had a workforce of around 17,000 employees. By the time Obama left the White House in 2017, the agency employed fewer than 15,000 workers. The EPA reached a high point in fiscal 1999, under the Clinton administration, when it had about 18,100 employees.

Meanwhile, EPA Administrator Scott Pruitt has maintained an agencywide hiring freeze since the beginning of the Trump administration.

“People have been retiring to get out of the agency, to get out of this toxic environment. So I would not be surprised if that number’s below 14,000 [employees] now,” O’Grady said.

In 2014, the EPA offered buyouts totaling $16.2 million, which resulted in 456 people leaving the agency.

Of the $31 million for buyouts in the House Appropriations bill, more than $25 million would impact Environmental Programs and Management (EPM), while nearly $6 million would go to the agency’s Science and Technology (S&T) division.

On June 14, the Senate Appropriations Committee passed its version of the spending bill, which would give the EPA a flat budget for the second year in a row.

Last year, the White House proposed cutting the agency’s budget by 31 percent, but Congress in March passed a spending package that left the EPA’s budget unchanged from FY 2017 levels.

Both the House and Senate Appropriations Committees have walked back the Trump administration’s proposed 23 percent cut for the EPA in FY 2019.

Firing back on executive orders: ‘We have the right to speak out’

The official time executive order, and two others aimed at making it easier to fire federal employees and reducing the window of time for negotiating collective bargaining contracts, have sparked outrage from more than a dozen unions and more than 20 Republican members of the House, as well as several Democratic lawmakers.

In its lawsuit, AFGE argues that the executive order on official time violates its members’ First Amendment rights to expressive association.

“We have the right to speak out on behalf of the employees about working conditions, and we consider the direction of our agency, and its staffing and budget levels, to be one of the premiere working conditions that we should be concerned about,” O’Grady said.

“Even if management and the union wanted to get together and discuss a workplace condition and resolve it in a fair and equitable manner, that would take away from our official time,” O’Grady said.

After speaking with Nate James, the president of AFGE Local 3331, which represents EPA headquarters employees, O’Grady said EPA management discouraged employees from attending an April 25 rally outside the agency’s headquarters.

“He did indicate that he had more people from other organizations than from his own local. People are afraid,” O’Grady said.

James did not respond to phone calls seeking comment on Thursday.

However, O’Grady said EPA management has met individually with employees regarding their participation in rallies.

“You won’t see any memos to that effect,” O’Grady said. “It’s more one-on-one discussions, people told to toe the line. If one of these executive orders goes through — the one that chips away at the merit systems protections, and if they shackle the unions from defending those people, then you’ll see that escalate,” he said.

An EPA spokesperson on Thursday said the agency is in negotiations with federal employee unions regarding the executive orders.

When asked by reporters about reports that Pruitt had staffers set up a meeting with the fast-food chain Chick-fil-A and seek out a used mattress from the Trump Hotel in D.C., O’Grady said agency employees have found those headlines “discouraging.” 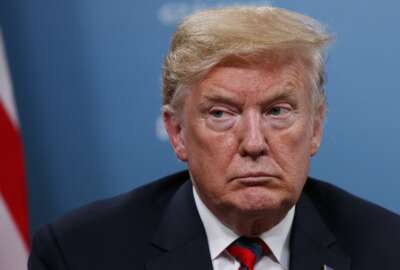 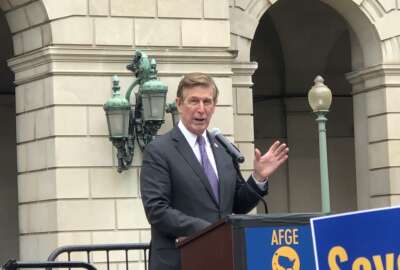