The Trump administration has been on a tear to remove what could be fuel for wild fires on federal lands. It’s set new and higher quotas for removal. With some stats on what’s been cleared and how they did it, the Federal Drive with Tom Temin spoke to the director of the Office of Wildland Fire at the Interior Department, Jeff Rupert. Learn more here.

Tom Temin: Tell us the general story. How does this all work in the sense of removing fuel? What is the fuel? What are you trying to do here in clearing lands of fire potential?

Jeff Rupert: Actually that question of what is fuel is probably the best place to start. So we’re talking about wildfires here and for us that’s our wildland fire program. Fuel, you know, from the simplest perspective, fuel is vegetation when it comes to wildfire. It’s the vegetation that literally fuels that fire. So our fuel program and our focus on reducing fuels is really a program that’s focused on managing vegetation and reducing the amount of vegetation that is available to burn. That burning and those fires occur when conditions align. So when it’s dry, when the winds blowing, and that fuel sort of reaches that stage where it’s very burnable, that’s what we’re really trying to impact and reduce with our fuel program.

Tom Temin: So is it mostly removing dead trees and limbs and brush, that kind of thing, while leaving the trees that you want to preserve in a fire intact?

Jeff Rupert: It’s a lot of that, but it’s not only that. If you’re familiar with much of what’s going on across the nation with force and forest management, dead vegetation, dead trees is a huge factor that we’re interacting with. There’s no doubt about that. But it’s not just dead. It’s also living vegetation. So think about this on a national scale. You’ve got forests and forest fires, but at Interior, for example, we’re managing a little over half a billion acres of land. So across the nation, it’s not just forest, it’s also grassland and its rangeland, and sort of everything in between. And, you know, fires don’t just burn in forests, they burn grasslands. They also burn in rangeland. Some of the real impactful wildfires that we’ve experienced have been in the areas that aren’t forests. It’s really that full spectrum of vegetation, so trees and grass and shrubs.

Tom Temin: So, in other words, you would create fire breaks for example, in the grasslands or in the forests.

Jeff Rupert: There’s a specific tactic to reduce the risk of fire to something that you care about or something that we care about. So perhaps around the community that is in or adjacent to a wildland area, whether it’s a forest or rangeland, those wild areas experience fire. Always have, always will. So a fuel break is a great example of the tactic of how to reduce that risk. So a fire burning across
that wildland areas, as it approaches a community or some value infrastructure that we want to protect.

Tom Temin: Give us some of the statistics. How many acres were you able to reduce the fuel loads on? And tell us about the board feet of lumber too, that was quite a in an effort to get that prepared for sale.

Jeff Rupert: So last year, we in Interior, with the focused effort we have on fuels reduction, so that’s all of this support and sort of the program we have built around specifically reducing fuels through that lens of wildland fire. In interior, we treated a little over 1.4 million acres. So that’s essentially going into an area, that full spectrum of vegetation types are included in that figure and reduce fuel, reduced vegetation on 1.4 million acres. Which is a pretty substantial achievement for us. We’ve had a real focus on essentially increasing the acres that were treating and trying to expand as much of a footprint as we can to essentially reduce that risk. Not so much fire, because we know fires going to occur, but actually to reduce that risk of catastrophic fires of those big, fast moving fires that we know that we’re going to struggle suppressing and trying t get put out.

Tom Temin: Tell us more about the timber board feet that you were able to collect.

Jeff Rupert: We were able to, in Interior last year, so this is 2019, we managed right at three quarters of a 1,000,000 acres, 750,000 acres of timber. And I think part of the real story there is the opportunity and the benefit that we have with that timber focus to leverage our efforts and interact economically with communities as well. Those timber activities and that forest activity really is a form of vegetation management. So we’re actually reducing the amount of fuels that are fueling those fires. And again, a huge opportunity and a huge benefit of that particular vegetation management, is that we’re able to leverage that economic sort of contribution and interest from industry and communities that are associated with that. So it really leverages is those efforts. It’s kind of that story of turning one dollar into two and then again, just being able to help expand that impact that we’re trying to achieve to reduce the risk of catastrophic fire.

Tom Temin: And the Interior Department doesn’t work alone in this effort. You also work with the Forest Service, which is the Agriculture Department. So you’ve got national parkland and forest service lands?

Jeff Rupert: Yeah, so in Interior National Park Land, there are four land management bureaus in Interior that represent the fire management and interior. So the national parks, as you mentioned, the United States Fish and Wildlife Service administers the National Wildlife Refuge system. So there’s land management and vegetation management occurring on the refuge system. The Bureau of Indian Affairs, which interacts with tribal lands and tribal trust lands across the nation and the land management and then the fire management that goes along with that. And then the Bureau of Land Management, which administers the nation’s public lands and principally in the west and prominently in the Great Basin. The range lands across the Western U.S. Again, all of that fire management land and management occurring. So that’s on the Interior side. On the Agriculture side, the Forest Service and all of the forest management, land management and fire management. The Forest Service fire management program and the Interior fire management program. We worked very closely. We often talk about essentially being joined at the hip in terms of those fire management activities. So that includes when we’re out interacting with fire, responding to fire, heavily coordinated, standard driven, integrated efforts. But then also pre-fire. So all the prevention, all of the fuels management, we really do look to coordinate those activities. Then also post-fire. So after the fire goes out, all of the work that goes along with recovering, rehabilitation, again heavily integrated, shared standard. It’s not just Interior and Agriculture, for wildland fire we have what we call the inter-agency fire community. So it’s not just the federal fire management programs. It’s also state fire management programs, and in many places across the nation, local fire programs as well. It’s a large, diverse community that has a focused commitment on these shared standards in integrated efforts. So when we have these large fires, we call them incidents, we assign incident teams to the fires. Those instant teams are composed of federal firefighters, state firefighters, local firefighters, all working together to interact with a fire. Increasingly, we’re working very hard to put that same kind of integrated, coordinated focus on the work that we’re doing before a fire hits.

Tom Temin: Let me ask you another question about that. Who does the removal? Is it contractors or federal employees or a combination? And what happens to the material that is removed? You burn it somewhere else, shredded or what?

Jeff Rupert: So before a fire for all of the pre-fire work, all that fuels management, there’s absolutely a heavy jurisdictional component to who does the work. So on federal land, much of that work is done through that sort of federal lens. So whether it’s actual federal employees going out and doing vegetation management work or contractors under federal contracts going out and doing that work, it has that character. The same is true for state lands. For example, it will have that sort of state character and then as you get closer and closer to that sort of community scale, you’ll see lots of areas where there’s that community sort of character to the work that’s being done. In terms of the focus that we’re trying to bring to coordinating those efforts, think of a large wildfire in the west that maybe you’ve seen watching one of the news channels, you know, half a million acre fire, maybe a million acre fire, that fire footprint is crossing many jurisdictions, so it’ll cross a federal jurisdiction to a state jurisdiction to a local jurisdiction. So it sort of ignores those boundaries. So as we think about the kind of fuels reduction work, we’re thinking about it through that same lens that to really reduce that risk of catastrophic fire and reduce those fuels, we sort of need to view it the same way, that work needs to occur across those jurisdictions. And so that’s why so much of our focus now is on how do you coordinate cross jurisdictional most effectively? And what are the strategies to work so that we can have that vegetation fuels reduction occurring on federal land and adjacent state land and adjacent local or private land so that they all worked together in tandem then to reduce
that risk profile for an entire certain geography.

Tom Temin: What are your goals for acreage in the coming year?

Jeff Rupert: Our targets are built largely in terms of as we look to future years. I’m sure most would sort of recognize, interact with a lot of the budget work that we do. So looking forward, we are absolutely looking to continue to stay on this trajectory that we’re on to implement and accomplish more acres. And you know how that interacts with our budget and all of the capacity that were able to focus on that work.

Jeff Rupert: It was great to be here, thanks. 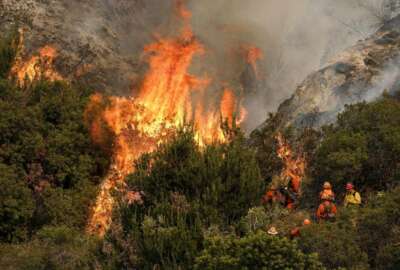 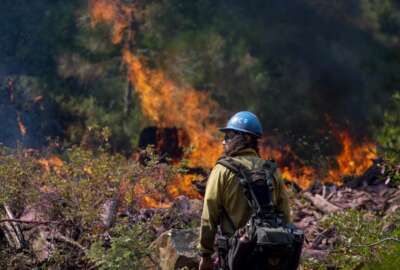