Pandemic fueled a surge in giving to the Combined Federal Campaign

Pandemic, riots throughout the nation and a messy presidential transition, what a season federal employees have come through. Yet the annual Combined Federal Campaign carried on through it all. How’d they do? With a wrap-up, the chairman of the CFC for the national capital region, Vince Micone, joined Federal Drive with Tom Temin.

Tom Temin: Vince, good to have you back.

Vince Micone: Thank you very much. It’s a pleasure to be with you, Tom.

Tom Temin: So this has wrapped up the donations as they do in early January every year, how did we do?

Vince Micone: So we surprised even ourselves. We set a goal of $30 million for this fall’s campaign, because we were really uncertain as to what we would be able to do during the pandemic. I mean, we realized that many federal employees get great steady paychecks, but a lot of those are not big paychecks. And many federal families depend on multiple salaries, and some folks lost their jobs. So we knew it would be very tough. So we set a goal of raising $30 million. So far, we have brought in and we are still counting, but so far, our numbers show that we have raised solidly $34 million, we’re still counting paper pledges. But when we’re done, we anticipate we will raise somewhere between $37-$38 million, which is not only ahead of our goal, but it is $4 million, more than we raised last year. So we’re just thrilled.

Tom Temin: Wow. And last year was no picnic, either for that matter I mean. So what do you attribute this generosity to?

Vince Micone: So I’m going to first of all really give a shout out to our team. I mean, we needed to completely transform how we do the CFC from something where there were in office activities, to something that we did remotely in a virtual environment. So we completely redesigned the campaign as we were going. And the techniques that, we had our use of virtual events, our ability to reach employees directly allowed us an opportunity to communicate directly with them about the importance of the CFC. But I think federal employees, look our mission is service, public service, we understand that. And I think employees understood that they were very fortunate to have their jobs, to have those go, to have the ability for so many people in our area to work from home, that they were more generous than they’ve been in past years because they understood the need was great. And what we told everyone is, look, even if you don’t give to a health charity, you’re giving the pandemic relief, because every single charity has had a real rough time raising the dollars they need for the services. And that really resonated as well. People understood that they could give to whatever organization and the charity, and they were having an impact.

Tom Temin: I was gonna say yes, because even though the government was scattered in terms of being physically not at their offices anymore, so it was hard to reach people as groups, people seem to have been aware of the fact that as a group, federal employees were doing better than the economy as a whole. And so therefore, they coughed up because of knowledge that so many people were out of work, because we had that big unemployment kind of surge that started to recede, but by the time the CFC was over, a lot of people had economic setbacks.

Vince Micone: Oh, most certainly. One of the things that was interesting, in new for me, I was invited to speak at a number of different events or meetings about the CFC at different agencies, and I pop on to the WebEx or the Zoom, and all of a sudden, I wouldn’t see just like 30 or 40 people. But I would see that there were 500 people on a call, and that I wasn’t just speaking to folks in the metropolitan area, but I may be speaking to people around the country. And I spoke to some of my colleagues who chair campaigns in other regions, and they had the same experience. So we were able to reach folks in ways that we have never reached them before. And that I think was very, very powerful to us.

Tom Temin: Yeah, in a sense, it almost mirrors the increase in productivity so many agencies experienced, somewhat surprisingly, when people did get scattered, and suddenly everyone was teleworking.

Vince Micone: Yeah, I think that we found that, again, it goes to the service commitment of employees, we’ve got a job to do, we know what it is, and when are managers and leaders understand how to make sure that we get the work we need and the resources we need, we’re just as productive at home as we are in the office. Now, there are many federal employees, the postal delivery people didn’t stop. The Postal Service is on the front lines every single day, veterans affairs with all of the health care that they provide directly to our veterans mean, those employees had to go in every single day and work. So we had a duty when we were home to not only show that we would be productive, but make it easier and safer for those federal employees to get to the frontlines where they needed to be to serve people.

Tom Temin: Do we have any idea yet how nationally the CFC did?

Vince Micone: So nationally, we think they’re doing really well, again, numbers are still being counted, but I think they nationally through the Combined Federal Campaign, we will meet or exceed what we did last year. I’m very proud of the fact that the National Capital Area we’re about 40% of all the dollars raised in the Combined Federal Campaign which you know, given the number of federal employees and retirees here that makes sense. A couple of really cool things, we had 25% of our donors were first time or new donors to the Combined Federal Campaign this year. So it wasn’t just relying on folks who had been donors for a number of years. That was fantastic. And retiree giving, also rose this year 25%, from what it was the year before. So we’re really beginning to make inroads to both retirees, and we’re reaching first time donors, which has not happened in many years in CFC.

Tom Temin: So do you get the sense, this could be the kickoff of a restoration of the historical levels that came through the CFC?

Vince Micone: I do, I think we’re very much on that track. And one of the bright spots in the year I think really forced us all, not just in the Combined Federal Campaign, but in how we do business to look at doing things in different ways. If you look, historically, when things are really rough, we seem to come out stronger and better. And we’re in one of those periods right now. I didn’t ever think I would live through a pandemic the way my grandfather did in 1918. But I think we’re gonna come out stronger, with new ways to communicate, new ways to provide service, new ways to experience community. And frankly, CFC, when you get right down to it, it’s about being a part and an active part of that community. You can sign up to volunteer, you can give money, but it really says, hey I’m part of something bigger as a member of the federal government and public servant, and I’m also a part of my community, and I’m going to do something to make a difference.

Tom Temin: And you do have a day job in the inspector general community as a federal employee, and also have this, sounds like you got some dispensation from your agency to be able to pursue being chairman. Are you going to do it again next year?

Vince Micone: I hope to continue next year. My boss, the Special Inspector General, has been very supportive. My agency exceeded our goal, I think, by almost 200%, when all is said and done. And that wasn’t necessarily because of me, because I let our campaign manager do it. But in the IG community, in particular, we understand how important what we do is to making sure that government serves people well, and that we use resources effectively. And so there was no question when I asked my boss if I can continue in the role, she said, well of course, you got to do it, and no other better agency to do it than ours.

Tom Temin: Yes, in the old days, you would have gotten back to the office after all of this. And that would have been a blizzard of pink slips, little pieces of message paper. I think they still publish those. I haven’t seen one in decades. But this way, it just goes on virtually.

Vince Micone: Yeah, so we had actually, this year 85% of our contributions were online through our portal, about 15% were paper. Now that makes sense, because we need to keep in mind that some federal employees, like Transportation Security Officers, Postal Service employees, as I mentioned before, they’re out, not sitting in front of desks. And so we provide that option for them to make sure that they have an ability to participate. But even we’ve made strides in terms of building an app that people can download on their phones. And that will probably be even in better shape next year and help employees who are not in the office everyday or in front of your computer have the ability to give.

Tom Temin: Well congratulations, and that should keep you warm throughout this winter knowing what federal employees in the region were able to do. Vincent Micone is chairman of the Combined Federal Campaign for the National Capital Region. As always, thanks so much.

Vince Micone: Thank you very much. And thanks to all the federal employees who contributed, all the retirees who contributed. And everyone who’s listening, please do what you can to be the face of change this year. It’s more important than ever. 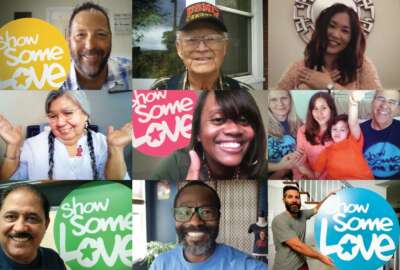 CFC calls for donations during difficult time for many