Federal agency management — in fact, the Biden administration itself — have been at odds with employee unions in the COVID and vaccine debates. At the Smithsonian, employees say their concerns over contact with the public haven’t been taken seriously enough, and that’s had consequences. For one view, the Federal Drive with Tom Temin turned to the president of the American Federation of Government Employees Local 2463, Reggie Booth.

The Smithsonian provided a response to this interview and the open letter from Booth. That can be found here.

Tom Temin: Mr. Booth. Good to have you on.

Reggie Booth: Good morning, Tom, how you doing? Good to be here.

Tom Temin: What is the situation with respect to your members who work for the Smithsonian, I guess mainly in maintenance and security types of jobs?

Reggie Booth: Yes, especially security — the frontline and even the building service workers, the ones who have to go in behind and whether cleaning restrooms or just, you know, the overall cleanliness of the museums. Currently, there is a rise in COVID cases within the Smithsonian museums and many, many employees right now, either they’re quarantining because they’ve tested positive or because they’ve been around someone who tested positive. And, of course, they’re not allowed to, you know, divulge the name of the person who they came into contact with, you know, so you just kind of have to wonder, you know, who it was, and, you know, go home and quarantine, but it’s created a lot of fear within the museum.

Tom Temin: Is it your sense that the frontline employees that meet the public — say, the guards —are getting their infections from the public?

Reggie Booth: Well, like I said, because of the fact that they’re not informing us of who the person came into contact, they’re only letting them know, this started once, you know, we started getting, you know, the public started coming back, especially around the holidays. You know, right after Thanksgiving is real busy, right after Christmas is real busy. And now, you know, you just have so many employees that are coming down with COVID and have to be in at work. And, you know, you kind of put two and two together and can tell something’s changed.

Tom Temin: And from the frontline view, are the people coming to the museums that are still open, the visitors, they are required to be masked. Are they, in general?

Reggie Booth: Yes, they’re required to be masked, but especially with the omicron version, where you hear them talking about, you know, which mask in particular are better or provide better safety. And then, you know, Tom, also there’s not really anyone who’s able to walk around and monitor to make sure that the employees — or not the employees, but the visitors — are keeping their mask going once they get into the building and [they’re] out of sight.

Tom Temin: And so give us a sense of how many of your members have COVID. I mean, how large is the bargaining unit, the local, and about how many people do you think are out now, with some sort of illness?

Reggie Booth: The bargaining unit we have, you know, a little over 2300 people. Not all of them, you know, are required to work right now; some are able to telework. But, you know, as far as because of the fact that, you know, I say we get individuals who test positive and, you know, some inform us and some don’t, and we don’t get timely counts from management, I would have to guess at around 20 to 30 people right now that are currently out with COVID.

Tom Temin: And has that affected the ability to have full shifts and full coverage of the functions that need to be covered?

Reggie Booth: Oh, well, without a doubt, Tom. As part of the reason with the closing of the four museums is because — especially as it relates to officers that are there are so many that are quarantined, right now, and even just being able to keep the museum’s open and functioning, you know — they had to close those museums, and shift those workers over to the other museums that are still remaining open.

Tom Temin: And therefore the possibility arises that more people are going to the museums still open. And do you feel that could have a cascading effect on the infection rates? If in fact, it is because of public contact that the people already out are out?

Reggie Booth: Well, what what ends up happening is just as you described. If at one point you have 12 museums opening and you close five of those, you know, now you force everybody into the museums that are remaining open. Recently I was, you know, called by some of the union employees to National Aerospace Museum, and then line, you know, it wrapped all the way around the museum. And you know, because the other museums had closed, so everybody was kind of forced into that. And on top of that, you get when you hear about the positive cases in a museum, and you close one museum, and now you tell the remaining employees at the closed Museum, we’re going to send you over to this museum that currently has a lot of officers on quarantine. Well, that scares them because you’re telling them that you’re sending them to a museum that has a high rate of COVID.

Tom Temin: What is it you would like management to do, then, at this point?

Reggie Booth: Well, we would like management, number one, you know, to close the doors. We want them to be able to get a handle on the COVID cases to allow the employees that are off, you know, of course to get better, and come to work after they’ve gotten better, but we’d like to see more cleaning and whatnot taking place. When we hear of people testing positive — and even, you know, the CDC recommends like, whether aerosol or foggers, or you know, professional people coming in doing cleaning — when you have the number of people that are testing positive, and the employees don’t see those type of things taking place where they feel like they’re coming into the museum the next day, and being faced with the same situation that they left.

Tom Temin: And how has management been, in terms of responsiveness and talking with you about these issues?

Reggie Booth: Well, management hasn’t really been receptive to it. We tried to get management to be a little more informative and to meet with us, but they really don’t care to discuss COVID. They have a COVID response team that the union has attempted to be a part of and requested management allow us to be on that team, because we do have first hand information. The employees call us. But to this day, you know, management hasn’t allowed us to be a part of that. We’re just looking for, you know, the public’s help and recognizing that the employees who they walk past each day as they come into the museums, they are terrified, and they would like the doors to close just to give a chance for this COVID to get under control because, you know, they’re nervous about taking this home to their families.

Tom Temin: Reggie Booth is president of the American Federation of Government Employees Local 2463. Thanks so much for joining me.

Reggie Booth: Thank you. I appreciate you having me on, Tom.

Tom Temin: We did ask the Smithsonian for management’s view. They declined an interview but a spokesman tells Federal News Network it has a masked mandate in place for all staff and museum visitors, and a 94% vaccination rate for staff. The Smithsonian says, and I quote, “encounters with the public are brief and are well below the CDC guidelines for exposure and that visitor officer contact both masked is literally seconds or minutes.” They also said that museum entrance lobbies are wide-open spaces. The spokesperson adds that at no point does the Smithsonian operate museums with staffing levels that jeopardize the safety and security of its employees, visitors or collections. 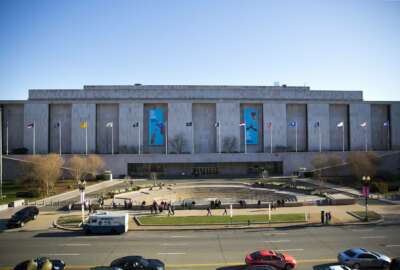 Smithsonian statement on COVID and employees

Letter to the Editor from AFGE Local 2463 President