Editor’s note: An earlier version of this story incorrectly stated that the National Park Service’s rule change would allow NPS to lease its arrowhead logo to corporate marketing campaigns.

Rep. Ryan Zinke (R-Mont.), if confirmed by the Senate as the Trump administration’s Interior secretary, will inherit a National Park Service with a multi-billion dollar maintenance backlog and a troubled work culture that he says needs reform.

Testifying before the Senate Energy and Natural Resources Committee...

Editor’s note: An earlier version of this story incorrectly stated that the National Park Service’s rule change would allow NPS to lease its arrowhead logo to corporate marketing campaigns.

Rep. Ryan Zinke (R-Mont.), if confirmed by the Senate as the Trump administration’s Interior secretary, will inherit a National Park Service with a multi-billion dollar maintenance backlog and a troubled work culture that he says needs reform.

Testifying before the Senate Energy and Natural Resources Committee on Jan. 17, Zinke told lawmakers that national park facilities are in need of repair following a centennial celebration in 2016 that drew record-breaking crowds.

“A lot of our national parks this last year are at capacity — we’ve had record numbers. And so, looking forward, what do we do about it? And a lot of it is repairing the roads, backlogs, trails, but also looking at the public lands around the park to make sure we look at those trail systems, to make sure the restrooms are clean, to make sure the sewer systems work,” Zinke said.

In response to a $12.5 billion maintenance backlog, NPS Director Jonathan Jarvis, before stepping down Jan. 3, approved a controversial rule that relaxes some of the restrictions the agency has on allowing corporate fundraising in national parks. Director’s Order #21 updates the agency’s policy on public-private partnerships, but has drawn scrutiny from public advocacy groups.

“These updates bring the long history of philanthropic support for America’s national parks into the 21st century,” Jarvis said in a statement upon signing the updated policy on Dec. 28, 2016.

Under the new rules, a corporate donor’s name may be recognized on a bench, brick, pathway, landscaping area, or plaza. The National Park Service may also enter into philanthropic partnerships with, or accept donations from, corporations that produce or distribute alcohol if authorized by the NPS director. The Park Service currently holds a partnership with Anheuser-Busch.

“The finalization of Director’s Order #21 signals a dangerous shift toward opening our parks up to an unprecedented amount of commercial influence,” Kristen Strader, a campaign coordinator at Public Citizen.

Consumer advocacy groups have opposed the rule change, but said the final draft has made some improvements.

“The original sweeping plan suffered from sloppy drafting and poorly thought-out concepts,” said Jeff Ruch, executive director of Public Employees for Environmental Responsibility, “We are pleased the Park Service edged away from its complete corporate embrace.”

During a 45-day review period, the Park Service received more than 350 public comments were received regarding the rule change. The rule change underwent some adjustments before being finalized. One big revision keeps corporate logos from appearing in national parks — instead, they’ll receive “credit lines” on NPS signage.

“While there will continue to be opportunities for limited donor recognition in parks, no one is going to commercialize national parks and park superintendents still won’t be allowed to solicit donations,” Jarvis said. “We have federal law to back us up on that.”

Sen. Angus King (I-Maine) on Tuesday called on Zinke to advocate for congressional funding to reduce the national parks’ maintenance backlog, which he said has been put off for too long.

“The backlog in the parks is a straightforward problem of funding. We should be funding to pay the maintenance of the parks. We’ve basically been putting it off for 10, or 15 or 20 years, and I hope that you’ll approach the upcoming budget as saying ‘this is part of our obligation to pay the park rangers and to pay all the expenses of the parks, and to chip away at this backlog,'” King said.

Zinke said he would express the urgency for funding to President Donald Trump. He also promised Sen. Tammy Duckworth (D-Ill.) that he would clean up the Park Service’s “toxic work culture” of sexual harassment allegations, which received congressional scrutiny in September 2016.

“There are problems in the Park Service. There are problems of sexual harassment, there’s problems in morale,” Zinke said. “Historically, the job of a ranger in the Park Service has been one of the top positions as far as employee satisfaction. Today, they rank at the bottom. Now, something’s going on — whether sexual harassment has an influence on it, whether they feel like they don’t have the flexibility to make decision — there’s a lot of reasons, but I have to get to the bottom of it.”

Michael T. Reynolds will serve as the acting director of the Park Service until a permanent successor has been appointed and confirmed. 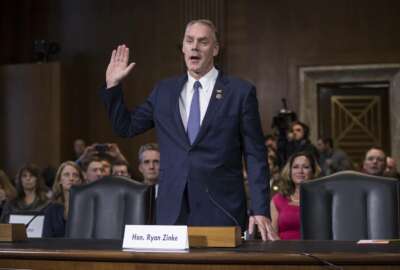