The Pandemic Response Accountability Committee, charged by Congress to oversee how agencies disburse more than $2 trillion in coronavirus stimulus funding, faces a wide range of challenges.

Before it can begin to oversee a pot of stimulus money more than twice as large as what Congress approved following the 2008 recession, the governmentwide Council of the Inspectors General on Integrity and Efficiency (CIGIE) must submit a new name to lead the pandemic committee’s panel of IGs only a week after announcing its first pick.

That’s because President Donald Trump on Tuesday removed Glenn Fine, the Defense Department’s acting inspector general, as the chairman of the committee by naming a new acting IG for the agency.

Fine remains in his Senate-confirmed post as DoD’s principal deputy IG, but the president has named the Environmental Protection Agency’s permanent IG, Sean O’Donnell, to serve as the next acting DoD IG.

While the pandemic board faces a massive task overseeing how agency disburses more than $2 trillion in a short period of time, early shakeups in its leadership raise longstanding questions about the independence of these watchdogs.

Meanwhile, government transparency groups warn the administration’s replacement of Fine and firing of Michael Atkinson, the intelligence community’s watchdog, could create a chilling effect on whistleblowers reporting fraud, waste and abuse at a time when so much spending is going out the door.

Earl Devaney, the former chairman of the Recovery Accountability and Transparency (RAT) Board that oversaw more than $840 billion in stimulus spending following the 2008 recession, told Federal News Network that for inspectors general, “independence is a fundamental tenant” of their jobs.

“IGs have to speak truth to power, and they have to do what’s right, and you can almost count on someone being mad at you when you do that,” Devaney, a former Interior Department IG, said in an interview.

Agency watchdogs report to both the president and Congress, but in a divided government, Devaney said IGs often find themselves in the middle of political disputes that they, as neutral third parties, have no business settling.

However, the RAT Board Devaney chaired from 2009 to 2011 won bipartisan praise for pioneering data analytics tools to flag and detect fraud and improper payments in stimulus funding, while also standing up Recovery.gov to make the spending data transparent to the American public.

“This isn’t a partisan issue. Fraudsters don’t vote Democratic or Republican, they tend to be sort of apolitical, in my experience,” he said.

Double-duty IGs rare, but not unprecedented

An EPA Office of Inspector General spokesperson told Federal News Network that O’Donnell will serve, for the time being, as both the EPA’s top watchdog and as DoD’s acting IG.

Last Friday, Trump said he intended to nominate Jason Abend, a senior policy adviser at Customs and Border Protection, to serve as the next permanent DoD IG.

With the pandemic board’s shakeup in leadership, the EPA OIG spokesperson said CIGIE, under the terms of the $2 trillion spending bill, must name a new IG to serve as the board’s chairman.

However, Rebecca Jones, policy counsel at the Project on Government Oversight, told Federal News Network that few IGs may opt for the post.

“Whoever is assigned to lead that committee next might have kind of a bullseye on their back, for lack of a better term, for removal from the president,” Jones said. “If you think about what that person is going to be doing, overseeing spending under any COVID relief spending, it’s a big job, and it’s going to be getting a lot of attention from a lot of people, including the White House.”

While rare, at least three other permanent agency IGs have held a second title of acting IG at the same time.

Gordon Heddell served as the Labor Department’s IG from 2001 to 2008, and later became the Defense Department’s permanent IG, but served in an acting capacity for a year prior.

Likewise, Jon Rymer served as the IG for the Federal Deposit Insurance Corporation from 2006-2013, but also served as interim IG for Securities and Exchange Commission in 2012 and 2013. Rymer later went on to become the DoD’s top watchdog.

But work of the DoD IG, which oversees one of the world’s largest bureaucracies and coordinates with IGs for each of the military services, carries its own challenges, even without juggling the workload of the EPA’s IG office.

“It’s not a typical IG office in that way. Their mandate is much broader, and just given the massive size of the DoD, I think that’s going to certainly be a challenge to oversee both simultaneously,” Jones said.

Meanwhile, House Democrats have introduced a bill that would broaden the criteria for IGs and their staff to serve as the head of the oversight board. Notably, the bill would also make Fine, in his current role as DoD’s deputy IG, eligible once again as the pandemic board’s chair.

The Coronavirus Aid, Relief, and Economic Security (CARES) Act requires CIGIE to name a permanent or acting IG to serve as the pandemic board’s chairperson.

The members urged House and Senate leadership to include the bill in future rounds of emergency coronavirus spending when Congress reconvenes April 20.

“Pursuant to the law Congress just passed, Mr. Fine was chosen to be the chairman of the new Pandemic Response Accountability Committee — with widespread support in Congress. Yet the President almost immediately removed him for no apparent reason,” the members said in a statement Wednesday.

That legislation marks the latest in a series of the bills past that Congress has taken up in the past few years to strengthen the independence of IGs.

The House in 2008 passed a version of the Inspector General Reform Act that would require the president to have cause to fire an inspector general, but that language didn’t make it into the final version of the bill.

Congress took up that legislation, in part, after President Barack Obama fired Gerald Walpin from his post as the IG of the National and Community Service Corporation.

Irvin McCullough, a national security analyst for the Government Accountability Project, said the president, under law, must notify Congress of a permanent IG’s removal or transfer, but isn’t obligated to provide a reason.

“The way the IG system is set up right now, and the way the law works, IGs are at will-employees that serve at the pleasure of the president,” McCullough said.

In letters to the House and Senate intelligence committees, Trump said that he no longer had confidence in Atkinson to do his job.

“Congressional intent is clear that an expression of lost confidence, without further explanation, is not sufficient to fulfill the requirements of the statute,” the senators wrote. “This is in large part because Congress intended that inspectors general only be removed when there is clear evidence of wrongdoing or failure to perform the duties of the office, and not for reasons unrelated to their
performance, to help preserve IG independence.”

McCullough said removing Fine from the pandemic board’s leadership and firing Atkinson not only puts a chilling effect on what IGs choose to investigate. He said it also discourages whistleblowers from trusting the process of reporting concerns to their IGs.

“Whistleblowers are having to ask themselves whether or not their disclosures or their complaints are too political, if they’re too big, if the IG will actually credibly investigate their disclosures. As a whistleblower, that’s the last thing you should ever have to ask yourself,” McCullough said. “Inspectors general are actually feeling wary about the president, or they have reason to be wary because they’re vulnerable, they can be removed at any moment.”

Acting IGs, meanwhile, have even fewer legal protections from removal.

Devaney said acting watchdogs often lack the gravitas or authority to set a long-term vision for the agencies they oversee.

“It’s very difficult for an unconfirmed person — a deputy that’s an acting IG — to feel comfortable doing things if they don’t have that sort of tenure that confirmed IGs have,” he said.

According to Oversight.gov, 14 agency IG positions remain vacant. That includes a vacancy for the Special IG for Pandemic Recovery created under the CARES Act. Trump on Monday named former General Services Administration IG Brian Miller to serve in that role.

For most of those vacancies, Trump has submitted nominations that the Senate has yet to approve. 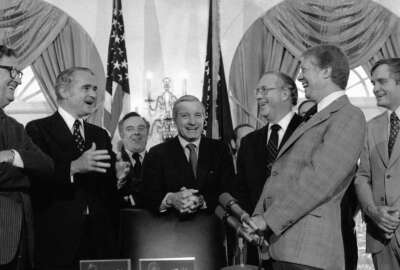