Whether it will listen is anyone’s guess. But a highly anticipated report to Congress on the future of the Office of Personnel Management is finally out. For how the National Academy of Public Administration went about this crucial work, Federal Drive with Tom Temin turned to NAPA president and CEO, Terry Gerton.

Whether it will listen is anyone’s guess. But a highly anticipated report to Congress on the future of the Office of Personnel Management is finally out. For how the National Academy of Public Administration went about this crucial work, Federal Drive with Tom Temin turned to NAPA president and CEO, Terry Gerton.

Tom Temin: Terry, good to have you back.

Terry Gerton: Good morning, Tom. Great to be with you.

Tom Temin: This was a heavy lift for NAPA, in part because of how extensively we’re looking at something as basic as much as the Office of Personnel Management, but personnel management in the government and how highly anticipated this was. This seemed like command performance, didn’t it?

Terry Gerton: Well, it certainly does have a lot of interest. But we were really honored to do this report at the request of Congress. As you probably remember, in 2018 the Trump administration made a proposal that included a legislative proposal to combine parts of OPM with the General Services Administration and with parts of the Executive Office of the President, and Congress didn’t think that was such a great idea. And so as part of the National Defense Authorization Act for 2020, they asked the Academy to take a look at the structure and the function of OPM. So they didn’t ask us to opine on the merger itself, but rather to really understand how OPM was functioning relative to all of its statutory requirements, and what recommendations we might make so that it could function better. And so really, for a year, we had unprecedented access to the people and the processes and the data around OPM to provide this recommendation back to the Hill and to the new leadership in OPM.

Tom Temin: In a statement you made in the press release actually, about this coming out, you said changes so that OPM can become the government wide leader it was always meant to be. I thought that was a telling phrase in the sense that OPM perhaps despite what might have happened in the Trump administration, in the long term, OPM has never quite lived up to the potential envisioned for it.

Terry Gerton: I think that’s really an important observation that comes out of this study. OPM is a little over 40 years old now. And it was envisioned to be the central strategic leader for human capital for the federal government. But because of our system that gives you leadership changes every four years. And because there have been so much transiency in the leadership of OPM itself, and Congress has had different ideas, the organization’s really never had a steady focus for the long term on what it should be, and what it should do and how it should do it. And so I think, as a result, when you have that sort of uncertainty, you slip back to what is the part of the mission that we know is not going to change. And so they’ve become very focused on compliance. And compliance is important, but what they’ve been missing, then is that strategic look, and that strategic guidance to federal agencies about how to really manage the human talent in the federal government.

Tom Temin: And did you also discover or look into the fact that OPM has been given a lot of production and operational responsibilities like processing retirement claims, and for a long time handling the background investigations work, which is not really personnel policy, but more personnel processing. And was OPM ever envisioned to be a operational agency like that?

Terry Gerton: Well, actually, one of the recommendations that we make in the report is that some of those functions like health insurance and life insurance and retirement really are part of the personnel lifecycle, and we think they should stay at OPM. But as they do that, they really need to modernize their systems, their processes, they need to have an electronic personnel record, they need to automate the retirement process, and they’ve had several attempts at that. So we make a recommendation that the leadership of OPM and Congress really need to work together to commit funding and program management to make that modernization. But we do think that those kinds of processes should stay at OPM. Now the shift of the background investigations does pose a structural issue for them, and so we address that in the report as well.

Tom Temin: Sure, that’s kind of a done deal now that it’s back at DoD.

Terry Gerton: Right. But it does mean that OPM needs to rethink its funding model. And they need to do that in partnership with Congress so that there’s an agreement about what OPM should be doing, how much it costs, and that they’re appropriated the funds to do it well.

Tom Temin: And in your recommendations, you really did something that everyone else seems to have shied away from and that is proposed specific changes for Congress to make in Title 5. And so much of the personnel work done in the last 20-30 years has shied away from touching Title 5, but instead reinterpreting and tweaking policy. So this is kind of laying the fish in the lap of the Congress itself.

Terry Gerton: Well, one of the very specific tasks in the legislation for us was to take a look at all of the statutes that provide guidance to OPM, more direction to OPM and offer our recommendations to clarify that. And so we firmly believe that OPM should be a strategic government wide advisor, that it should not be just limited to Title 5. And much of that OPM can do itself administratively, but there are some pieces where Congress will need to come in and say, we actually envision a broader role. And so we’re pretty specific about the legislative changes that Congress will have to take up to make that clear, and to enable a creative leadership in OPM to make those changes.

Tom Temin: And tell us about how you selected, how NAPA selected and who are some of the people that actually did this work.

Terry Gerton: Like every study panel that the Academy does, we use our professional research staff to do a lot of the day to day exploratory research. But we have a panel of fellows, experts who understand all the different facets of the issue. And so in this case, we had a panel of five fellows, led by Janet Hale, who has deep experience, both in federal personnel but also in IT, in federal resource management, in policies and programs, so that we have a comprehensive view at the expert senior leader level of the issues facing the agency that we’re working with. And that really helps us bring that blue ribbon approach to the study that we’re doing. And to be clear, like all other Academy reports, this is a report of those fellows on the panel. They’ve endorsed it. And they speak to the findings.

Tom Temin: And of course, we’ve been talking about what went into the report and what some of the recommendations for Congress are — but ultimately, this is for the federal workforce. And looking ahead to maybe some of these reforms being enacted by Congress, some of the changes being made by OPM and the administration, what could federal employees in the best sense expect out of this work?

Terry Gerton: Well, I think to be really clear, this is not a study that looked at civil service reform. So it’s not about pay setting, it’s not about promotions, or performance management. It is about the organization that sits at the center of the federal government that manages human capital. If Congress and the administration and the new leadership at OPM take up this roadmap, we think what you get four or five years from now, is an organization that’s strategically focused on human capital, that has the data to understand the federal workforce and to forecast its needs for the future, that has the best practices in place that is automated and modern. And that brings to the federal service a whole new approach to strategic talent management, not position management or performance management, but talent management. And that will be a whole different environment for the federal workforce going forward.

Tom Temin: So the implication there is that much of the specific work in human capital and management and so forth, still is at the human capital, HR function, and the mission function at the agencies.

Terry Gerton: Yes, very true. And this aligns very much with our no time to wait reports from a couple of years ago. It’s a really the role of the strategic human capital organization, whatever you call it, is to enable the agencies to best perform their mission with their most important asset, which is their people. Making sure you have the right people in the right positions to do the right kind of work so that the federal government delivers what it’s supposed to the American people.

Tom Temin: So OPM then would have indirect leverage on the quality of life for federal employees, but it would still primarily be the agencies and the management at agencies that hold that.

Terry Gerton: Yes. But if you can create a broader forward looking strategic environment, then the federal human capital officers at the agencies have a whole different perspective as well and can hire strategically, can think about really bringing and maximizing the assets of their workforce to the work of the organization.

Tom Temin: Terry Gerton is president and CEO of the National Academy of Public Administration. As always, thanks so much.

Terry Gerton: Tom, it’s a pleasure to be here. Thank you. 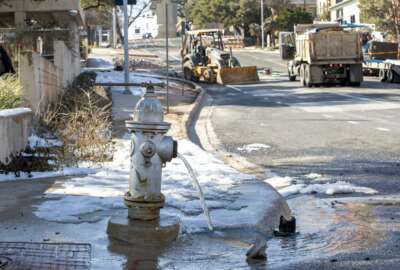