Agency actions that are intended to implement any one of the three recently repealed workforce executive orders from former President Donald Trump should “cease immediately,” the Office of Personnel Management said Friday in new guidance.

The memo, which OPM released Friday afternoon, gives agencies more specific directions on how they should implement a January executive order from President Joe Biden.

Biden’s order described career employees as the “backbone” of the federal government and emphasized the...

Agency actions that are intended to implement any one of the three recently repealed workforce executive orders from former President Donald Trump should “cease immediately,” the Office of Personnel Management said Friday in new guidance.

The memo, which OPM released Friday afternoon, gives agencies more specific directions on how they should implement a January executive order from President Joe Biden.

Biden’s order described career employees as the “backbone” of the federal government and emphasized the need to protect, empower and rebuild the federal workforce, which administration officials have made a point of reiterating in recent weeks. OPM’s new guidance reinforces that point as well.

More specifically, Biden’s order, which he signed on his third day in office, repealed the three 2018 EOs from his predecessor that limited collective bargaining, reduced official time and set new procedures aimed at more quickly firing and disciplining federal employees.

“Those EOs were an attack on the federal workforce, plain and simple, and they had to go if we were going to make any progress resetting federal labor relations,” an administration official told Federal News Network.

OPM’s new guidance instructs agencies to quickly identify and then revise or rescind any actions they may have taken in the last few years to implement the Trump workforce orders.

For those that are currently engaged in collective bargaining negotiations, agencies must withdraw any bargaining proposals that implement the provisions of Trump’s 2018 workforce orders and draft new ones that are consistent with the Biden administration’s policy, OPM said.

For agencies who had already renegotiated collective bargaining agreements that implemented the Trump orders, OPM is urging them to revisit those specific provisions.

“Agencies must identify those provisions and, as appropriate and consistent with applicable law and the policy articulated in [Biden’s order], engage impacted unions, as soon as practicable, to suspend, revise or rescind the actions covered in these CBA provisions,” Kathleen McGettigan, OPM’s acting director, wrote in the guidance.

This includes matters where the Federal Service Impasses Panel imposed a decision, or matters that are pending before an agency for its review, OPM said.

The impasses panel imposed several decisions on agencies and their unions in recent years, often without full agreement or acknowledgment from federal unions, including at the Department of Health and Human Services, Social Security Administration, Environmental Protection Agency and Department of Veterans Affairs, among others.

Bargaining is unresolved and ongoing at VA, and the American Federation of Government Employees has been eager to turn the page and start negotiations over under new leadership.

“Agencies should take a hard look at the degree to which, if any, [the 2018 orders] influenced bargaining-table strategy and decision making,” OPM said.

Biden’s January order “neither requires nor prohibits affected agencies from reopening CBAs on other matters not related to subjects covered” under the Trump EOs, OPM added.

Agencies to bargain over ‘permissive subjects’

Repealing Trump’s workforce executive orders has been a top priority for federal employee unions, which spent much of the last few years fighting the EOs in court and at the bargaining table.

Unions applauded Biden’s effort to repeal the previous administration’s policies but have said it’s only the first step. They’ve actively called on agencies to revisit the contracts they wrote during the Trump administration and return to the bargaining table to draft new ones.

Since the president formally repealed Trump’s policies in January, unions have said they’ve been in a holding pattern, waiting for agencies to decide how they’ll handle the new order from the Biden administration.

Biden’s order went into effect the day it was signed, but OPM heard from agencies that wanted more guidance on what their next steps should be, an administration official said.

“While some agencies already have moved to roll back the last administration’s assault on workers’ rights by returning necessary office space to union officials, restoring representational time for union representatives, and revising contracts to remove anti-worker provisions, not all agencies have acted promptly,” Everett Kelley, AFGE’s national president, said Friday afternoon in a statement. “This guidance confirms that all agencies must implement President Biden’s order and OPM’s guidance, and come back to the table to renegotiate contracts that were corrupted by the previous administration’s illegal actions.”

“With this guidance, federal employees will again have a voice in the workplace and a valued role in improving government services,” Tony Reardon, NTEU national president, said in a statement.

“As outlined in the guidance, we expect agency leaders where we represent frontline workers to immediately set aside any actions taken in accordance with the previous administration’s now-rescinded executive orders and start fresh,” he added. “This will clear the table and allow employees and agency leaders to resume good faith negotiations, as the law requires.”

Eliminating Trump’s policies will be easier for some and more complicated for others, especially for the agencies that renegotiated entirely new collective bargaining agreements that imposed official time limits or revoked free government office space.

Other policies will require regulatory changes. OPM, for example, finalized formal guidance last fall on probationary periods and disciplinary actions, which were outlined in one of Trump’s orders.

OPM is drafting rule changes for notice and comment, which will revise and rescind pieces of those regulations, McGettigan said.

Friday’s guidance from OPM also describes how agencies should engage with unions in bargaining over permissive subjects, which “cover the numbers, types and grades of employees or positions assigned to any organizational subdivision, work project, or tour of duty and the technology, methods and means of performing work,” the guidance reads.

Agencies should bargain in good faith with unions on these topics; failing to do so is “inconsistent” with the Biden administration’s directive, OPM said.

In the event departments and unions can’t reach an agreement, the Federal Mediation and Conciliation Service is available to help, as is OPM, the agency said.

No one moved to Schedule F

The order from the previous administration allowed agency heads to reclassify certain policy-making positions into a new class in the excepted service known as Schedule F. Career federal employees would have lost their civil service protections in the process, meaning their agency heads could have fired them — and hired new replacements — at will.

At least one agency came close to reclassifying career employees into the new schedule but didn’t have time to finalize any actions.

“Not a single person was moved into Schedule F, and we were very pleased that we were able to cleanly put an end to that on day three of the administration,” an official said.

In the event agencies had identified positions as potential candidates for Schedule F, they should no longer submit them to OPM for review and approval. Any Schedule F approvals from OPM are revoked, and agencies should cancel any reclassification actions, according to the new guidance.

A report on a $15 minimum wage is in the works, McGettigan said, and OPM is working with agencies and their chief human capital officers to compile information and feedback. 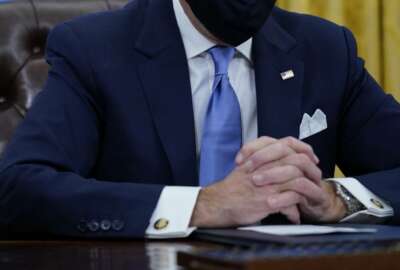 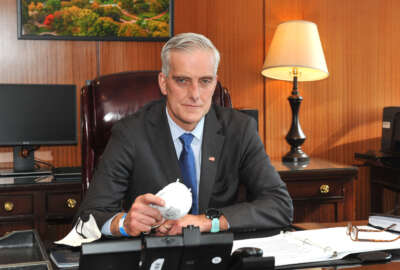