A labor-relations panel has rewritten about a dozen bargaining proposals for the Social Security Administration after a series of lengthy negotiations with its union.

The Federal Service Impasses Panel (FSIP), a body of seven presidentially-appointed members who serve as a component of the Federal Labor Relations Authority, upheld the majority of SSA’s proposed changes to its collective bargaining agreement with the American Federation of Government Employees (AFGE).

In total, the impasse panel ruled on four provisions...

A labor-relations panel has rewritten about a dozen bargaining proposals for the Social Security Administration after a series of lengthy negotiations with its union.

The Federal Service Impasses Panel (FSIP), a body of seven presidentially-appointed members who serve as a component of the Federal Labor Relations Authority, upheld the majority of SSA’s proposed changes to its collective bargaining agreement with the American Federation of Government Employees (AFGE).

It’s at least the second time in recent months the panel has weighed in on contentious bargaining negotiations between an agency and its union —and rewritten portions of the contract in the process.

The impasse panel in April rewrote several bargaining articles for the Department of Health and Human Services and the National Treasury Employees Union. The panel’s decision set a limit on the number of days HHS employees can telework, changed the procedures for union representatives to request and use official time and instructed the agency to charge NTEU rent for the use of government office space and supplies.

Perhaps most significantly, the impasse panel decided to cut official time to 50,000 hours a year for a bargaining unit of 45,000. SSA union representatives used more than 255,000 hours of official time in fiscal 2016, according to the most recent data from the Office of Personnel Management on this topic.

“The panel believes it is appropriate to accept management’s position because it provides a greater balance of ensuring that its workforce is available to conduct duties that will further the goals of the agency’s mission with the union’s desire to provide representational services,” the decision reads.

Several agencies, including SSA, temporarily experienced a cap on official time last summer when the President’s May 2018 executive orders were in effect. AFGE representatives at SSA, some of whom had spent all of their working hours on union activities, retired in order to continue representing employees.

AFGE has said these limits don’t give their members enough time to continue representational duties on behalf of their colleagues.

“They want to make us ineffective,” Jenkins said. “They want to be able to point to the fact that, well, you have a union, and your union isn’t doing anything for you. They want us to remain in name, but they want to prevent us from using, or having access to the tools to do our job.”

The impasse panel’s decision will also eliminate government office space, which SSA estimated at $930,462 in fiscal 2018, for AFGE representatives, with a few exceptions. It also prevents the union from using agency mail services, supplies and other equipment.

“All of these cost savings can be allocated to other uses, such as 500 additional disability hearing officers,” SSA said.

The panel’s decision also describes a disagreement between the two parties on telework. Under the panel’s decision, each SSA deputy commissioner will determine whether previously-eligible employees should remain eligible for telework. AFGE requested no changes to the agency’s telework policy.

Referencing stories from six SSA managers, the panel said it agreed the agency “needs maximum flexibility to ensure its functions can be performed in a timely and efficient manner.” A program manager for SSA’s IT operations said there were issues at 12 field offices after the agency rolled out telework in 2012, according to the FSIP decision.

The impasse panel didn’t however, limit the scope of the grievance process and didn’t choose to eliminate performance-based actions from that process, nor did it get rid of the union’s ability to grieve removals, suspensions for more than 14 days and reductions-in-grades or pay.

But the impasse panel did decide a new SSA-AFGE contract would be in place for seven years. The agency estimated $4.7 million in salary, training and travel costs to negotiate a new collective bargaining agreement. With the expectation parties negotiate a new agreement every seven years, as opposed to AFGE’s suggestion of two, SSA said it would save money if it didn’t have to renegotiate a contract as frequently.

Negotiations between SSA and AFGE began last June and continued into December. Both labor and management, often with the help from an independent mediator, resolved at least 50 bargaining articles, according to the panel.

But after the parties couldn’t agree to terms over 12 remaining provisions, SSA declared an impasse.

Jenkins said AFGE wants to return to the table with SSA and ensure that the impasse  panel’s provisions, and the provisions that both parties have agreed to, are set in one master document. AFGE wants to ratify the agreement, but the agency has told the union it won’t pursue the ratification process, Jenkins said.

AFGE said SSA hasn’t started implementing any of the impasse panel’s decisions, and the union is hopeful the agency won’t unilaterally enforce those provisions.

“Our understanding of the law is that these provisions only go into effect when you have an entire agreement,” Jenkins said.

Still, the union isn’t optimistic. It has the HHS-NTEU negotiations as almost a near model of what may come. HHS, despite NTEU’s disagreements, is beginning to implement the provisions from the impasse panel’s decision.

Following the impasse panel’s decision, at least one office within HHS implemented a limit on telework to one day a week. A spokeswoman for HHS confirmed the new policy at the agency’s Office of the Assistant Secretary for Health to Federal News Network this week.

Meanwhile, collective bargaining negotiations are ramping up at other agencies. AFGE has started negotiations with the Department of Veterans Affairs, and conversations are just beginning at Citizenship and Immigration Services.

The Department of Housing and Urban Development is also engaged with AFGE in bargaining negotiations. HUD appealed to the impasse panel over the parties’ ground rules, according to Jenkins.

“We’re reviewing all legal strategies. The panel itself hasn’t been challenged historically. There are questions about whether the panel can or cannot be challenged in court. There are questions about how far the panel’s jurisdiction extends,” Jenkins said of AFGE’s next steps with the impasse panel. “We are currently reviewing all litigation challenges as it relates to this panel and the decisions they’re making.” 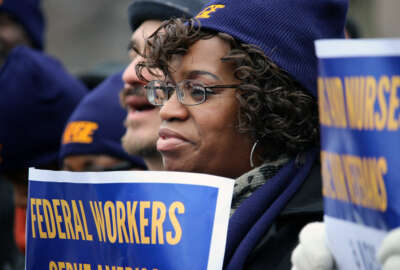