Two weeks into his new job, Veterans Affairs Secretary Denis McDonough said he’s trying to model the behavior he wants to see from his senior leaders and employees, who are juggling the pandemic response, a vaccination effort and several ongoing modernization efforts.

“I’m trying to get around as much as I can to get to know the employees,” he said Tuesday during his first wide-ranging conversation with reporters. “It’s obviously difficult in the context of...

Two weeks into his new job, Veterans Affairs Secretary Denis McDonough said he’s trying to model the behavior he wants to see from his senior leaders and employees, who are juggling the pandemic response, a vaccination effort and several ongoing modernization efforts.

“I’m trying to get around as much as I can to get to know the employees,” he said Tuesday during his first wide-ranging conversation with reporters. “It’s obviously difficult in the context of the pandemic. It’s also difficult that I want to model to our team that it’s fully allowed and fully supported that they work from home. I’m trying to model some of that behavior myself, so I’m doing some time at home every week.”

McDonough dropped in Tuesday on a virtual training session with executives. He said he reached out to labor leaders before he was confirmed and attended a discussion on Black History Month and anti-racism policies, which the American Federation of Government Employees hosted.

AFGE, which represents 265,000 VA employees, is anxious for McDonough and his leadership team to recognize the president’s recent executive order on strengthening the federal workforce and begin taking steps to implement it.

McDonough acknowledged Biden’s executive order in an email he sent to employees on his first day at the department. He encouraged employees to read the EO if they hadn’t already, and pointed to a passage in the order that described career civil servants as “the backbone” of the federal workforce.

“Our success as a team — our ability to deliver world-class care for our veterans — also depends
on how we treat each other,” he said in the Feb. 9 email to the workforce. “Our respect for our fellow VA employees and the veterans we serve is critical to everything we do.”

Biden’s order rescinded three EOs from the prior administration, which limited collective bargaining and official time. VA had implemented many provisions from the orders, even as the department and AFGE have been locked in contentious negotiations over a new bargaining agreement for more than a year.

VA, among other things, eliminated official time for most health care professionals and kicked unions out of government office space. Some locals opted to pay rent to VA for the space they were using.

“I’m digging in with our team on the questions that you raise about representation, but I’m not in a position to make any decisions on that yet,” McDonough said of his approach with federal employee unions and VA’s collective bargaining posture. “I’m trying to get to know everybody. I’m trying to show up.”

AFGE said there were a few, small signs VA is beginning to recognize Biden’s new workforce order, the union said earlier this week.

“We have seen very little movement. We have seen some in the VA, in terms of the office space,” Everett Kelley, AFGE’s national president, said Sunday during a call with reporters. The union is virtually hosting its annual legislative and grassroots conference with members this week.

One AFGE local had received a bill for rent through 2022, and it was recently cancelled, Jacque Simon, the union’s national policy director, said Sunday. The union is reaching out to agencies to discuss Biden’s executive order but has been largely in a holding pattern as new appointees clear Senate confirmation and wait for specific guidance from the Office of Personnel Management.

“We’ve been in conversation with people at several agencies talking about what steps they can take immediately before OPM issues its guidance,” Simon said.

Ultimately, AFGE wants VA to return to the bargaining table and essentially start negotiations over.

In the meantime, McDonough said he had directed VA to conduct a department-wide review of its policies to ensure they’re in line with another Biden executive order on combatting gender and sexual orientation discrimination.

The review, which McDonough described as an intentional effort to embed diversity and inclusivity in VA policies and practices, should be finished by the end of March.

“[It] will ensure that VA provides a welcoming and inclusive environment for LGBT vets and employees and seeks to increase alignment between VA and DoD,” McDonough said. “I can’t get ahead of the review… but my goal as secretary is to ensure that VA is welcoming to all vets, including transgender vets.”

Since the pandemic, VA has brought on roughly 80,000 new hires since the part of the pandemic, and McDonough said the department will maintain an “aggressive recruitment effort.”

About 20% of those new hires were brought on within three days, Richard Stone, VA’s acting undersecretary for health, said at a House appropriations hearing last week.

“That strikes me as remarkable,” McDonough said. “There are still a lot of vacancies, obviously. We’re going to continue to work that, and diversity will be a major effort there.”

When it comes to VA’s Office of Accountability and Whistleblower Protection (OAWP) — which as the department’s inspector general has noted is struggling to perform its statutory functions and discipline high-level senior executives for retaliation or misconduct — McDonough described a few priorities.

He wants to install and quickly confirm a new appointee with the skills necessary to lead OAWP effectively.

“We’re not in a position to announce anything yet, but it’s a high priority,” he said of the accountability office.

Communicating his views of whistleblower protection, oversight and accountability to the entire VA workforce is another priority, McDonough added.

“My challenge as the leader here is to make sure that the processes, the procedures and the institutions that the people operate in and through are operating clearly, transparently and in an empowered way with the support of the secretary, where the secretary takes some of the risk from them so they can be innovative and creative,” he said. “The biggest challenge is that. Getting the policies and procedures in place and [getting] the structure right so people feel the support that they need to be creative and innovative, and people have the structure whereby they get the support of this massive organization. With 380,000 people, there is a massive load of expertise and capability here.” 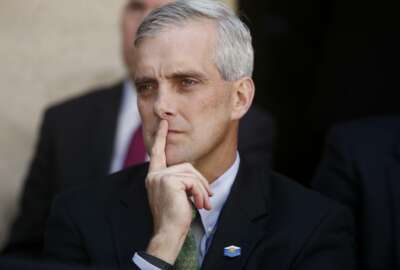