Infrastructure spending could outrun the ability to oversee it

We now know, with ever-mounting evidence, that pandemic relief spending resulted in hundreds of billions of dollars in wasted spending. The same could happen with infrastructure spending unless agencies tighten up their oversight. That’s the view of Project on Government Oversight senior policy analyst Sean Moulton. He spoke to the Federal Drive with Tom Temin.

We now know, with ever-mounting evidence, that pandemic relief spending resulted in hundreds of billions of dollars in wasted spending. The same could happen with infrastructure spending unless agencies tighten up their oversight. That’s the view of Project on Government Oversight senior policy analyst Sean Moulton. He spoke to the Federal Drive with Tom Temin.

Sean Moulton: The Biden administration has taken some lessons that it’s learned from the problems that had on the COVID awards, both from its work and the previous administration’s work and brought it over and made some changes in terms of oversight, some that you know, have some real potential to save money and create greater accountability, probably one of the ones I’m most encouraged by is that they have instructed agencies to bring in inspectors general into the design of programs, especially new programs, but anything that’s spending a lot of money so that the people who are investigating fraud, can bring the things they know, to the program before it even spends money. And it of course, makes you scratch your head and wonder, why hasn’t this been done for years now, you make so much sense to say, you know, you’re going to take those people who investigate how things go wrong, and make sure they don’t go wrong the next time you’re spending money. But that’s what they’re doing now. And hopefully, it does get rid of some of the more egregious examples of waste and fraud from the infrastructure programs.

Tom Temin: But isn’t it also true that the inspectors general were supposed to be part of the oversight of pandemic spending? And now many of them are expressing shock and horror at how much did get wasted?

Sean Moulton: Well, yes and no. So they’ve definitely been a part of the COVID spending oversight. But after the money went out the door, and that’s generally inspectors general role is to investigate fraud or to review agency programs to see if they’re operating efficiently. But they’re not normally brought in and talked to, apparently, before the money goes out the door. And so they’re sort of the people who audit and check after the fact that’s been their main role. And so that is why we’re seeing in the COVID spending, the inspectors general are saying, we’re kind of surprised at how bad things are, because we’re looking into it now. And now on infrastructure, they’re trying to close that circle a bit, and say, well, we’re gonna bring them in before we send any checks out the door, and have them look over what checks and balances, what protections we have in place. And if they’re sufficient, there’s something else we can be doing.

Tom Temin: What about the chief financial officer and that whole channel of authority in an agency.

Sean Moulton: You would think that they would bring some of the same experience to these program designs. But I’m not seeing that. Some of the COVID awards that we saw going up the programs, I mean, they just didn’t have basic guardrails on these programs. They weren’t checking, there was no real verification as to whether or not these companies were real companies, or if the people who were submitting the information, were genuinely that company, there was basically a lot of corporate identity fraud going on, where someone would apply for money on behalf of a company that they didn’t represent. And those seem to be very simple things that almost every program should have in place. The PPP program wasn’t supposed to go to companies that got created after the pandemic started, it was supposed to help companies that were being hit by the pandemic. And yet, there’s a lot of evidence that people were creating companies after they heard about this program, just to apply for it.

Tom Temin: Yeah, let’s open up a restaurant when nobody can go out and then get some PPP funding, I guess. We’re speaking with Sean Moulton, he’s senior policy analyst at the Project on Government Oversight. So agencies have then under the Biden administration for infrastructure, brought the inspectors general earlier on into the process of overseeing that spending, but you’re also writing that there’s some steps that have not been taken. Therefore, there’s still a lack of true accountability.

Sean Moulton: As encouraged as I am about IGs getting involved in program design, the reality is, we’re never going to know how effective they’re going to be. Because we’re not tracking this money well enough. We don’t know where the money is going. And often, we don’t know what the money is being used for. I mean, we have hundreds of millions, if not billions, dollars, probably going out the door regularly on infrastructure. Now we’re ramping that up. And if you look at the infrastructure programs, we’ve already got in place, most of it, you know, it goes to a state agency, and you really can’t tell where it goes after that. So you don’t know if it went to the area around the state capitol if it went to the rural areas of the state, if it went to the poorer counties of the state, we just have no idea because we’re not following the money far enough down that sequence of distributions. Then you can figure out was this meant equitably? Did everyone in the state get their fair share of road money, of broadband money, of you know, electric grid money? We don’t know.

Tom Temin: Yes, that’s interesting, because you know, the usual canard about federal money as well, it comes with all kinds of strings attached. And so states, counties, cities think twice before taking it, or at least in theory, but it sounds like there’s not a lot of strings attached to these awards.

Sean Moulton: Not in terms of public reporting strings, because the data we’re seeing, it’s got a lot of problems. The award descriptions themselves are vague to completely uninformative, you will have road money that just says, this is 2022. highway money. That’s the award description. And we know it is there’s other data points associated with this award data that says this is a highway program. We don’t need the award description to say we need to know, what road was this used for? And we’re just not getting that. I’m sure there are some strings attached to this. But it’s not public reporting strings.

Tom Temin: Do you think the agencies say the Transportation Department making the grants do they know, and they’re not reporting it? Or where it is the gap in the information here?

Sean Moulton: We would hope. I mean, it would be welcome news to me, if the agency knew and it just somehow wasn’t getting into this public reporting, because that’s an easier fix if we’ve already got the data someplace. And we just need to figure out a way to start getting it into this stream of data that goes out to the public. But I worry that the reality is, is the agencies don’t know either, that as far as they’re concerned, their money went out the door, the check got cut to a state agency. And that’s sort of the end of their responsibility. My worry is that’s what’s going on here.

Tom Temin: Are there any steps at this point that an agency that let’s talk about DOT, because I think that’s where a lot of the infrastructure, if you really believe it’s roads and bridges, that can get on the dime here?

Sean Moulton: Yeah, I mean, there is. So one of the things they’re supposed to be doing is they’re supposed to be reporting sub-awards for this federal money. So when it goes to the states, and a state department of transportation gets it, they’ll do a distribution out to like I said, to counties, to major cities, and we should be seeing that data. But right now, the data they release is very unreliable, it’s either missing, or it’s highly duplicative. We’ll see, you know, three, four, five times the money going out in sub-awards. Looks like it’s going out. Because those awards keep getting double reported.

Tom Temin: Meanwhile, the clock is ticking, isn’t it?

Sean Moulton: It is. If the money hasn’t started going out for this infrastructure spending, it soon will be. And as the COVID spending awards showed us, once it goes out the door about the best you can hope for are good investigations and maybe to clawback some of it. But you know, a lot of this money, if it goes out to the wrong people, it’s going to be wasted, it’s going to be gone. And so it’s much better to figure this out and have accountability before any checks are written. And so hopefully we’ll see a higher level of review and accountability before the money is spent.

Infrastructure plan: $33M to clean up hundreds of oil wells 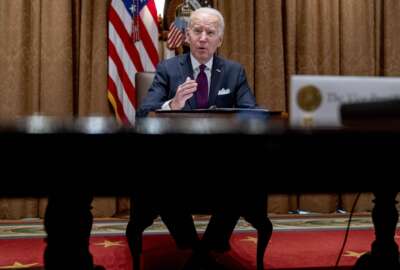