Top leaders of the Air Force are fully adopting telework and engraining it into post-COVID plans, seeing it as a way to save money for the service and increase productivity in some areas.

“We’re not going back,” Air Force Vice Chief of Staff Gen. Stephen Wilson said Wednesday at the Air Force Association Virtual Air, Sea, Space and Cyber conference. “We’ve had an 800% increase in our ability to do this teleworking digital experience. Nobody...

Top leaders of the Air Force are fully adopting telework and engraining it into post-COVID plans, seeing it as a way to save money for the service and increase productivity in some areas.

“We’re not going back,” Air Force Vice Chief of Staff Gen. Stephen Wilson said Wednesday at the Air Force Association Virtual Air, Sea, Space and Cyber conference. “We’ve had an 800% increase in our ability to do this teleworking digital experience. Nobody wants to go back to what we were doing. So, how do we take this challenge and use it as an opportunity to move us forward?”

Teleworking is being adopted in new ways in the total force as well.

“We fully embrace this culture of teleworking,” said Air Force Reserve Chief Lt. Gen. Richard Scobee. “Even in the post pandemic environment that we will find ourselves in eventually, a telework culture can remove barriers for us and the reserve component. It’s really about making it easier for airman to serve. I want all our airmen to find it easy to continue to serve, whether it’s in a part-time or full-time capacity. Why would you go back to anything different?”

Air Force leaders are trying to figure out how they can further use telework to their advantage after expanding virtual private network pipelines and outfitting airmen and civilians with the technology they need.

“I was talking about saving money,” Air Force Chief of Staff Gen. Charles Brown said. “My son works in the corporate sector, and he doesn’t have an assigned cubicle. If you think about the office space we have here in the Pentagon and how well we might be able to do that in the future and save costs. It also helps us out as the Space Force stands up.”

Lt. Gen. Brian Kelly, Air Force deputy chief of staff for manpower, personnel and services, agreed and said the military branch could use telework to help with recruiting as well.

“Imagine us now being able to hire somebody in Arizona who works in the Pentagon, and then never leaving Arizona,” he said. “Maybe occasionally coming temporary duty to the Pentagon, but staying in their homes. Military members not permanently changing station because they’re able to effectively telework.”

Wilson said some areas of the Air Force were more productive than they would have been in person.

“I went out to Goodfellow Air Force Base, and I saw what they were able to do with this digital infrastructure,” he said. “They use this new way of learning called hybrid learning. Goodfellow is the intelligence schoolhouse for the Air Force. They were able to cut the timeline by about a third and actually produce a better graduate out of it by doing the both in-person and tele-learning.”

That’s not to say that everyone is going to be working from home. Wilson and Brown said the Air Force is still figuring out what positions work best for telework and what the ratios of home/office time there might be for certain positions.

There are also positions that can’t be done remotely.

“I have not been able to get anyone to explain to me how I fix a B-52 engine through telework,” Bunch said. “The reality of it is we’ve got to have a harmony and we’ve got to have people like maintainers there or we can’t generate the aircraft, we can’t do the supply chain and we can’t repair the parts.”

Until the pandemic subsides, airmen and civilians will continue to telework while also practicing social distancing and interchanging shifts to promote safety.

Brown said one of his main concerns during the pandemic is military parents.

“You’re trying to telework, you have school aged kids, and now you’re also a homeschool teacher,” he said. “To me that is a stressor. That’s a challenge airmen are dealing with and we’ve got to be sensitive to that as senior leadership level, as do all levels of our leadership. You have certain humans that are trying to balance their family as well as they’re getting their education for their children. At the same time, they’re trying to support getting the mission done.” 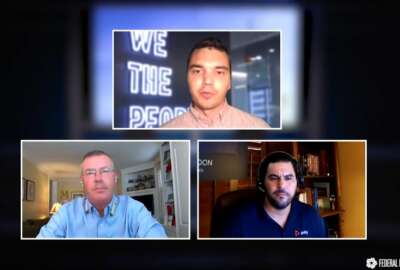 Teleworking in a post-COVID world means tailoring technology to you 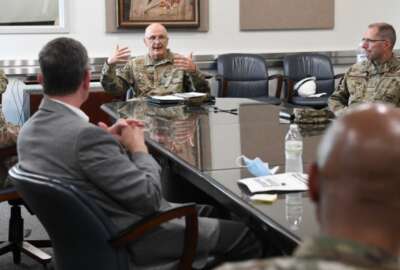