When Hurricane Matthew made landfall in the U.S. in early October, it was a chance for the Federal Emergency Management Agency to prove it’s learned from its mistakes.

“I think that what you see in Matthew is the maturation of FEMA’s ability to be prepared and then respond to a disaster,” said Joe Nimmich, deputy FEMA director, on Homeland Security Month. 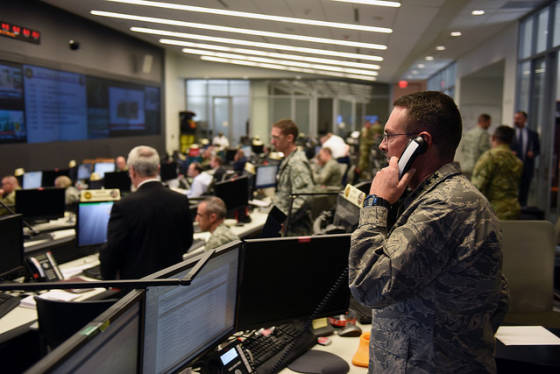 When responding to Hurricane Matthew is your job

From gathering weather data in the air to providing relief on the ground, federal employees snap into action as Hurricane Matthew ravages the East Coast.

“Clearly, we had some big challenges that hurricane Sandy provided to us,” Nimmich told the Federal Drive with Tom Temin. “Anything of that magnitude, that stresses the system like that, really brings out the problems and challenges that you’ve got.”

One of the improvements FEMA has made since that storm is the launch of a tool to make it easier for victims to claim flood insurance. FEMA has been working on the tool for about a year-and-a-half, including some trial-and-error adjustments made after it was used during flooding in South Carolina during 2015.

One thing it offers is the ability to immediately claim a $5,000 payment before an inspector even arrives on scene. This is to help policy owners deal with the immediate aftermath, whether it’s making their house livable or paying for a hotel in the meantime.

The idea, Nimmich said, is to make the person partially whole as quickly as possible

However, Nimmich said funding for flood insurance programs is a big struggle.

“I talk about it in terms of microeconomics and macroeconomics,” Nimmich said. “From a macroeconomics standpoint, the flood insurance program is not actuarially sound. It is not unknown that it is about $22 billion in the red.”

FEMA borrowed the money from Treasury and is paying it back, but Nimmich said this year will be a strain after Hurricane Matthew and the flooding in Louisiana and other places.

Another way FEMA has improved its disaster response is by pre-positioning people and supplies ahead of the storm, and moving them accordingly with the storm’s progress.

“The ability for us to be mobile, and adjust to the reality that exists is part of what we have to be able to do to be able to support the citizens that are most impacted by any event,” Nimmich said.
That was one of the biggest lessons learned from Katrina — that in order to effectively do its job, FEMA had to be empowered to act like a first responder instead of a second response organization.

“FEMA was not able to, by the construct of the Stafford act, be able to respond or pre-position resources,” Nimmich said. “We had to wait for the governor to ask. You saw how badly that worked in terms of Katrina. The post-Katrina legislation allows FEMA to be able to expend dollars to be able to move commodities and people forward in anticipation. The legislation has allowed us to become the responders that we think we are now, and that played out pretty well in Matthew.”

In order to do that, FEMA maintains a baseline of commodities like non-perishable food, bottled water, generators, cots, blankets and other “basic life-sustaining support” until contracts with the private sector kick in and begin delivering resources. FEMA’s owned commodities are then freed up to move along with the storm.

FEMA also attempts to utilize its “shelter-at-home” program, which strives to make homes damaged by storms or flooding livable as quickly as possible, which involved ensuring homes are mold-free, climate controlled, capable of running a stove and refrigerator and free of damaged drywall.

As a last resort, FEMA will bring in “manufactured housing units,” but only reluctantly. Nimmich said they don’t help the community come back as quickly as possible.

Instead, FEMA prefers to place victims in local hotels or even rental properties, if any are available. Nimmich said FEMA works with local chambers of commerce to make the hotels’ needs part of the community restoration and get the best price possible.

“In Louisiana, while we couldn’t get to the government rate, we all settled on a rate that was slightly higher than the government rate to be able to have 2,400 people that are in temporary shelter in hotels until we can find more permanent locations for them,” Nimmich said.