About eight months ago, the Army announced it was embarking on its biggest acquisition reform effort in nearly 40 years.

In order to do that the service set up six cross-functional teams to focus on the Army’s top six modernization priorities.

Now, the Army is preparing to award contracts based on the findings of the cross-functional team responsible for a better protected, more mobile tactical network and interoperability between forces.

“We’re going after some emerging...

About eight months ago, the Army announced it was embarking on its biggest acquisition reform effort in nearly 40 years.

In order to do that the service set up six cross-functional teams to focus on the Army’s top six modernization priorities.

Now, the Army is preparing to award contracts based on the findings of the cross-functional team responsible for a better protected, more mobile tactical network and interoperability between forces.

“We’re going after some emerging capabilities funding to explore some other alternatives. It’s really 2017 dollars that were available from the office of the secretary of defense that we are going to put a few things on contract by the end of this fiscal year to attack four areas in two of our lines of effort,” Maj. Gen. Pete Gallagher, the Army Network Cross Functional Team director, said during a June 21 speech at an AFCEA event in Arlington, Virginia.

Gallagher also said the Army will be using some of its 2018 money to buy research and development efforts. A large swath of 2018 money for networks is also going to support security force assistance brigades in Afghanistan.

The cross-functional teams, which also inform the Army on long-range precision weapons, a next-generation combat vehicle, future vertical lift platforms and missile defense, are currently informing the Army on its acquisition plans through 2024.

This is especially pertinent since the Army just released its vision for the force through 2028.

Doing that is a big and expensive task, which involves ramping up the Army’s size and capabilities until 2022.

“The Army of 2028 will be able to deploy, fight and win decisively against any adversary, anytime and anywhere in a joint, multi-domain, high-intensity conflict while simultaneously deterring others and maintaining its ability to conduct irregular warfare,” Army Secretary Mark Esper said June 5.

Gallagher said the secretary and Army chief of staff made it clear they will fund modernization going forward, despite what kind of budget the service ends up with.

“We are not trying to go forward with flat [budgets] we are trying to go forward with focus. That focus is which of those program lines are going to give us the best bang for the buck to get us the network we need and then where can we afford to divest,” Gallagher said. “We spent a lot of time on that the past couple of weeks on divesture recommendations and then where do we need to invest heavy in certain program lines that’s going to give us the maximum network flexibility we are going to need going through 2024 that’s going to set the conveyor belt and the glide path to get the chief and the secretary what they want by 2028.”

Along with the cross-functional teams, the Army is setting up its Futures Command which will oversee the reformed acquisition structure.

“Just to put things in context, when you say we’ve been here before, we’ve taken on modernizing our networks before, but not like this. Not in this type of environment,” said Lt. Gen. Bruce Crawford, the Army’s chief information officer. “The last time we took on an effort of this magnitude the internet was just beginning to take shape. It existed in laboratories and there were some who were proficient who had really thought it through … but not the institution. Social media was just a dream and there was no such thing as software defined capability.”

Crawford said there was barely any formation of thought around what threats the internet posed to networks.

He said what makes the Army’s new effort different is it takes an institutional effort to modernization and is informed by feedback from soldiers and commanders.

“With a few exceptions, what we have is essentially a linear process — going from an idea, writing up a big requirements document and then vetting it through multiple steps — it takes years, and it’s just not going to be effective going into the future,” Gen. Mark Milley, the Army’s chief of staff, told reporters in 2017 during the rollout of Futures Command. “So we’re going to re-engineer the corporation.” 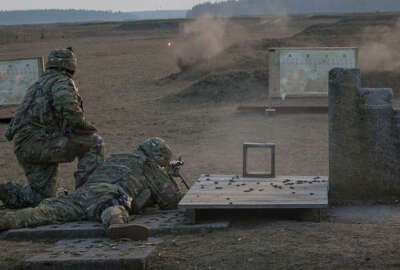