The biggest change to the Army’s acquisition bureaucracy in four decades is now officially off and running, but service officials still can’t provide a clear picture of success. And that has some lawmakers worried.

The biggest change to the Army’s acquisition bureaucracy in four decades is now officially off and running, but service officials still can’t provide a clear picture of success. And that has some lawmakers worried.

In a Thursday House Armed Services Readiness Subcommittee hearing specifically aimed at gauging if the Army’s Futures Command will work, Futures Command leader Gen. John Murray and Army Undersecretary Ryan McCarthy were unable to elucidate clear, quantifiable ways of determining if the new organizational approach will actually make the procurement process better — at least not yet.

“In terms of value to the warfighter I think that’s going to be very hard to put metrics against. I think we are going to get a lot of that back from soldier input,” Murray said. “Direct feedback not only through the process, but at the tail end and really can a soldier apply this on the battlefield and does it enhance their chance of mission success. I think that’s the ultimate metric and that’s going to be really hard to put specific metrics on. That’s probably why I can’t pinpoint specific [metrics].”

Murray said Futures Command is currently coming up with some metrics on how to measure the command’s success. One of those will be that it will take not long than a year to develop a requirements document for any given weapons system.

Some lawmakers are skeptical of the new command and are concerned the lack of metrics will make Futures Command just another bureaucratic quagmire.

“History shows that over time all such commands grow rapidly no matter who is in charge. Large administrative commands like this often develop internal processes that consume vast amounts of time and resources,” Bordallo said.

Murray said as far as a headquarters staff, he planned on capping government employees at 500 and keeping contractors to a minimum.

Rep. Joe Courtney (D-Conn.) said he understood the logic of a Futures Command, especially after seeing large weapons systems fail over the years, but that he thought the subcommittee would be anxious to see clear results in the form of metrics in the next two years.

While the command does not haveany way of scientifically measuring success, the Army leaders tried to allay lawmakers’ fears by explaining how the command will streamline acquisition operations.

“Really the strongest element of the command is you have a single bellybutton to a portfolio, long-range precision fires for example, so a vendor can go into one place and they can talk to all the stakeholders associated with the process,” McCarthy said. “This team-of-teams process brings a requirements leader with a program manager, sustainer, tester, all of those key stakeholders together and formalize the relationships.”

McCarthy said bringing together all of those players makes it easier to telegraph the Army’s needs to industry, increases the communication about all stages of a weapon’s life cycle and speeds up the acquisition process. 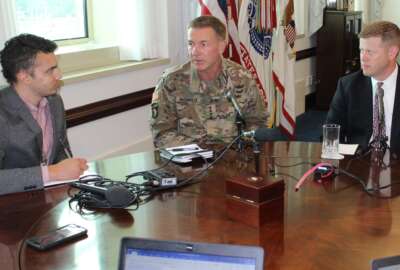