Like its sister services, the Army is cash-strapped when it comes to the funding lines that pay to keep its installations around the world in good working order.

But despite that challenge — and in some ways because of it — the service says it’s determined to invest in a new generation of technologies that could drastically change...

Like its sister services, the Army is cash-strapped when it comes to the funding lines that pay to keep its installations around the world in good working order.

But despite that challenge — and in some ways because of it — the service says it’s determined to invest in a new generation of technologies that could drastically change how it operates its bases. These range from new methods to monitor and adjust energy usage, to the ways soldiers and families experience life on a military post.

“We’re looking to digitize the installations in their entirety,” said Jordan Gillis, the assistant secretary of the Army for installations, energy and environment. “Facility operations, building occupancy experiences, frictionless security, that’s all within our grasp. And imagine a soldier and their family moving from one community to another, they’re already recognized, all their settings carry over from one place to another. Kids are already registered in school and extracurricular activities, spouses are already employed. It minimizes stress, reduces downtime.”

The Army has been noodling through the concept of “installations of the future” for several years, but now plans to begin a series of industry engagements to get a better understanding of what’s possible, and to begin piloting some of the new approaches at a handful of its bases.

At the Association of the U.S. Army conference in Washington on Wednesday, officials announced plans to hold an industry day in early 2019, though no date or location has been set as of yet. The Army had previously hoped to hold a similar engagement by November of this year.

“We’ve gotten to the point where we have pretty well fleshed out an Army vision for what an installation of the future looks like at a higher level,” Gillis said. “It’s more efficiency and lower cost, enabled by technology. At the industry day, we will take some specific requirements and use cases that we have developed and look for industry to suggest the solutions that they have. We’ll look for ways to partner with them to pilot those to figure out where the biggest bang for the buck is, and then we can expand them across the force.”

And the Army knows it must do something differently in order to continue to effectively operate the facilities where its troops train and where its families live.

Even in a budget year in which Army and other Defense officials have roundly and repeatedly praised Congress for providing a robust Defense budget, the generosity has not necessarily flowed to the budget lines that pay for facilities maintenance, restoration and maintenance (FSRM).

In the Army’s case, the 2019 appropriations bill provides just over $3.5 billion — about the same as last year — an amount officials have previously said would cover only about 80 percent of the known maintenance requirements for the Army’s existing infrastructure.

But Lt. Gen. Gwen Bingham, the assistant chief of staff for installation management, said the new technology push is intended, in part, to help with that funding shortfall.

“What we’re really doing is putting teeth into the concept of leveraging technology, be that artificial intelligence, robotics, autonomous vehicles or big data analytics, so that we can be more predictive in the maintenance of our facilities,” she said. “That’s a particular area that we’re very interested in. We want to be able to look at a facility and understand when it’s going to be in a poor or failing state, so that when we take those precious dollars, we can use them in a way that we apply them at the point of need.”

For some of the facilities that have already reached the point of “failing” beyond the point of cost-effective repair, the Army and the other military services have also begun to invest heavily in demolishing them. They hope to at least reduce the costs associated with trying to maintain badly-degraded buildings.

That’s one of the few options available to eliminate excess infrastructure after nearly a decade in which the Defense Department has requested Congressional permission to divest itself of unneeded facilities, via the Base Realignment and Closure (BRAC) process, to no avail.

Another has been to reduce the amount of private real estate the Army leases, consolidating that office space into underutilized, on-base facilities. In the National Capital Region, Bingham said the Army has reduced its leased space by two-thirds since 2011.

Gillis argued the demolition process is a reasonable substitute for BRAC, under the circumstances.

“It’s pretty good. It’s not a ton of money, but there are resources involved with maintaining buildings even if they’re on a demolition list,” he said. “So it’s in our best interests to take the dollars and sort of clean up the balance sheet and get those off the books.” 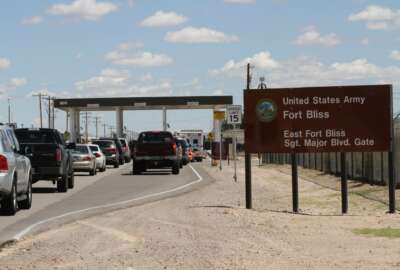