After spending a year setting up, the biggest change to the Army’s acquisition system in 40 years will be fully capable at the end of July, but a new report is casting a shadow on Futures Command’s establishment.

After spending a year setting up, the biggest change to the Army’s acquisition system in 40 years will be fully capable at the end of July, but a new report is casting a shadow on Futures Command’s establishment.

Army Futures Command leader Gen. Mike Murray said the organization grew from 12 people at its groundbreaking on July 13 last year, to a massive organization encompassing 24,000 soldiers and civilians across 25 states and 15 countries.

Futures Command took on organizations like the Army Medical Research Center, cultivated relationships with industry and academia, started building a robotics institute at the University of Texas and established a headquarters in Austin, Texas.

“I like to describe Futures Command as a startup trying to manage a merger as we’ve assumed command of other organizations across the Army,” Murray said at the Pentagon Thursday.

Futures Command is tasked with modernizing the Army after it spent nearly the last two decades focused on operations in the Middle East. The command will bring the Army into the future by focusing on multi-domain weapons that will keep the military’s overmatch of near-peer competitors like China and Russia.

It does that by housing research and procurement under one roof, reaching out to nontraditional businesses and utilizing new contracting vehicles.

“One criteria for reaching full operational capability is the ability to execute the missions that the Army had given Army Futures Command,” Murray said. “As most of you can suspect, the Army didn’t give me the year off to sort it out before they started asking things from me. I think we have been actually executing the mission for the last six to eight months if not longer. That’s why I’m very comfortable saying 31 July we will be fully operational.”

Other criteria leading to that fully operational status include proper facilities and hiring staff, Murray said.

“What’s changed most recently is Monday morning I moved up to the 19th floor of the building we are in at the University of Texas Systems Building. The key things about the 19th floor is I have a sensitive compartmented information facility and I have ready access to classified networks, which will make a huge difference in what we are trying to do. With the facilities I’m very, very comfortable with where we are.”

Murray said the cross functional teams — the “crown jewel” of Futures Command, made of six teams tasked with researching and procuring the Army’s six modernization priorities, such as long-range precision fires and future vertical lift — are more than 90% staffed, as is the artificial intelligence task force.

The headquarters is 100% staffed on the military side and more than 50% on the civilian side.

Futures Command doesn’t have any time to bask in being fully operational. A Government Accountability Office report released this week took aim at the way Futures Command prepared itself to work with small businesses.

Small businesses are crucial for bringing in new, innovative ideas that transcend what the big defense contractors do, and will spearhead the changes the military wants to make to counter near-peer competitors.

The report states Futures Command did not leverage the acumen of other Army organizations, even ones as obvious as the Army Office of Small Business Programs, when setting up. GAO is concerned the command may be reinventing the wheel by missing out on the lessons learned from other entities with small business experience.

“According to command officials, they prioritized setting up the command structure and engaging with small businesses quickly, instead of focusing on coordination,” the report states. “The command has recently been working to improve coordination, but has not formally coordinated such as by establishing agreements with other Army organizations that have small business expertise.”

The GAO report also states Futures Command does not track how frequently or in what ways in engages with small businesses for research and development.

“Tracking and measuring engagement would help ensure the command obtains quality information that may help the Army evaluate, and potentially enhance, its small business engagement,” the report states.

“The funny thing is if I talk to defense primes they are convinced all we are working with is small business, and if I talk with small business all they are convinced we are working with is defense primes,” Murray said. “It’s going to take a combination of both for us to accomplish our mission. I agree with the GAO report. Small businesses are key to our success. We have a way to go, I agree with them. We are in the process of hiring a lead for my small business office to make sure we are focused on exactly what the GAO report suggests we do.”

Futures Command cross functional teams (CFT) showed off some of the technologies they have been developing earlier this week at Ft. Myer-Henderson in Virginia.

Daryl Youngman, deputy directors of the air and missile defense CFT, highlighted a model of the Maneuver, Short Range Air Defense — a moveable air defense artillery for low-altitude air threats like drones and fixed-wing aircraft, something the Army hasn’t had to worry about in recent conflicts, but may in future ones.

“We started with a directive requirement back in February 2018,” Youngman said. “We now have nine prototypes being built. We expect to have our first turret and integration of our first prototype in the near future and starting testing in the October timeframe.”

The Army invited industry to a demonstration of what it wanted to defend against; from there it went forward with the OTA process.

“From a demonstration to refining requirements to an updated contract to buy the initial prototypes in about 10 months is remarkable,” said Maj. Gen. Robert Rasch, program executive officers for missiles and space. “Normally we don’t get a set of requirements upfront in 10 months and a contract takes forever. Futures Command allows acquisition and operational senior leaders to look at a problem and ensure we have the right layers of process on a program and shred the things that don’t really apply. That’s really hard for a program manager because he doesn’t have the authority, but when you have a four star or the secretary of the Army or the undersecretary of the Army leaning in on something it really helps expedite the process.” 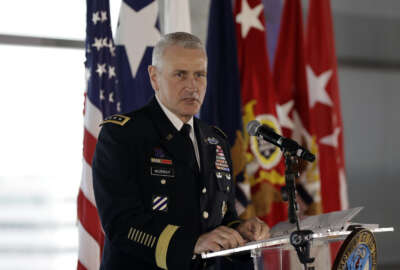 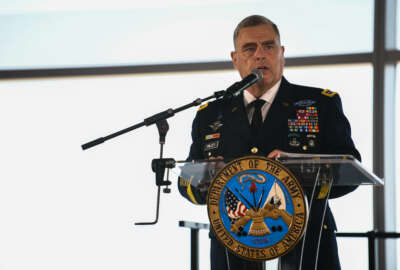