The Air Force’s initiative to modernize its network didn’t miss a beat over the last few months despite the pandemic and other related challenges.

In fact, the Air Force expanded its test of network-as-a-service to move into the early stages of reaching full capacity,

Maj. Gen. Kevin Kennedy, the Air Force’s assistant deputy chief information officer for digital transformation, said the service is opening up the technology and culture change throttles under the Enterprise IT...

The Air Force’s initiative to modernize its network didn’t miss a beat over the last few months despite the pandemic and other related challenges.

In fact, the Air Force expanded its test of network-as-a-service to move into the early stages of reaching full capacity,

Maj. Gen. Kevin Kennedy, the Air Force’s assistant deputy chief information officer for digital transformation, said the service is opening up the technology and culture change throttles under the Enterprise IT as a service (EITaaS) initiative.

“Just on May 29, we’re able to approve both Offutt Air Force Base and Buckley Air Force Base to go from a 10% capacity on their network-as-a-service up to up toward 100% capacity,” Kennedy said on Ask the CIO. “That throttle is being guided by the 16th Air Force down at AFCyber. One of the things as we’re looking through that is what’s the cultural transformation that we had to think through? The other part is there is a stakeholder engagement piece that we needed to really focus on between industry and the base level airmen that are working toward this new way of information technology, as well as at the headquarters level in the major command level to make sure that all of the stakeholders across the environment, understand what we’re trying to do. The key here is we’re looking to provide services at an enterprise level and cost and resource them there, where previously it may have been the requirement of the major commands to do that.”

The move to fully open up network-as-a-service (NaaS) to Offutt and Buckley demonstrates the progress the Air Force is making with its initiative.

Kennedy said Offutt and Buckley are using the NaaS expansion to rethink their approach to access through virtual private networks, which became more important as the number of remote workers surged over the last six-plus months.

“What we’re trying to see there is how we can leverage a different transactional path with different security devices that will enable us to leverage their networks or security to see if that does help with the users as they’re trying as they’re leveraging IT, if they see that access and where we think we will see that first is the Air Force is pretty close to wholly in to Office 365 cloud-based environment for our collaboration tools, and where we’re really focusing on is as our airmen use those tools to perform their missions and basic collaboration with email teams and the like,” he said. “We are looking to see if we’re leveraging their networks, their cloud access points, the different internet access points, versus the ones on the DoD Information Network (DoDIN) transactional paths to see if there’s a difference. We want to make sure that we’re comfortable with the security on that path as we’re transitioning along.”

While the concept of EITaaS isn’t new. Over the last 20-to-30 years, agencies have tried similar concepts ranging from alternative service providers to SEAT management to managed services with limited success.

“Where the technology has come in, and what the cloud enables us to do, I think it does enable less of a capital investment potentially into information technology services, the number of data centers and things like that so we can think differently about it. I want to emphasize to you we’re not looking at [that] as necessarily a cost savings [initiative],” he said. “There’s two challenges that the Air Force asked us to look at. One of them was a capability improvement that the information technology, the speed and resilience of IT that we needed to improve. And the other part was, they wanted the most modern kind of capabilities that were out there. Where we are on the model is understanding what do we need to have built in to the acquisition roles that incentivizes the right behavior? I think a lot of our risk reduction effort is also looking at how do we write contracts in a way that don’t dis-incentivize the outcomes that we’re looking for.”

He added another key piece to the EITaaS effort to make sure they avoid vendor lock-in and that the service’s data is mobile and portable, especially if they need to go to a different cloud or service provider. This is one of those lessons learned from previous attempts to use managed services where the government didn’t retain the ownership of the data.

Kennedy said the Air Force is working closely with the Army and sharing its lessons more broadly across the Defense Department.

With the Army, Kennedy said they have integrated Army personnel into their program office, while the Air Force has a dedicated person at Defense Information Systems Agency headquarters to bring its perspective to a possible DoDwide EITaaS.

“The Army has embedded liaison officers with our integrated program office up at Hanscom and so make sure that we stay well aligned as we’re going forward. We want to enable the collaboration and coordination across the department,” he said. “We have provided occasional updates to the [DoD] CIO. We also get together with the DISA just to make sure we’re all understanding where we are and to see if there’s any friction points that we need to work through as far as coordinating some of the technological solutions or some of the policies — between the Air Force, the DoD CIO and DISA.”

Despite the success of the risk reduction efforts so far, the Air Force is far from decided on its approach. Kennedy said the major commands still are reviewing the process and outcomes to make sure the approach going forward will meet their needs.

“We continue to look at that transactional space and focus on our airmen and their ability to leverage the network and influence their readiness with the end-user devices that they were using,” he said. “It is truly understanding if our technology refresh rates were keeping up with the capabilities and we were also looking to explore the kind of tools that we’re using in the cloud. That was one of the other things that we highlighted that as we do our follow on technology refreshes to look at what are the baseline capabilities that we want in our tablets or laptops or desktops? And so that was another one of the positive outcomes.” 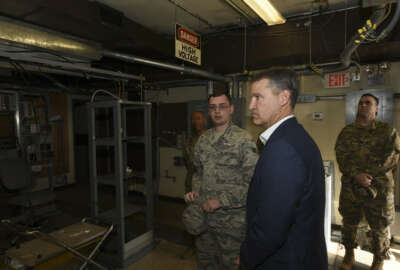 Air Force finally in alignment across most major IT foundational elements