Being a federal worker is a lot like being a fat, juicy rabbit trapped on a fox-infested island. Feds have all the angst of being the ultimate prey without any of the romantic rewards of being a rabbit.

That’s because to some foxy politicians, civil servants are fat, juicy, defenseless targets. Some are on the hunt all the time, while others come out in the fall — the official hunting season.  The new fiscal year is often...

Being a federal worker is a lot like being a fat, juicy rabbit trapped on a fox-infested island. Feds have all the angst of being the ultimate prey without any of the romantic rewards of being a rabbit.

That’s because to some foxy politicians, civil servants are fat, juicy, defenseless targets. Some are on the hunt all the time, while others come out in the fall — the official hunting season.  The new fiscal year is often when the worst things happen to people in GS Land.  And in case you’ve lost track, October 1 is this Thursday.

If things go wrong for you, and right for certain politicians of both parties, there will be a government shutdown. The Iran treaty and funding for Planned Parenthood are the upfront issues.  But angry and bitter politics — with people in both parties playing it to the hilt — are the underlying reason for the shutdown threat.

The surprise resignation Friday by House Speaker John Boehner (R-Ohio) could put any shutdown on hold.  If so, it’s only a matter of time before it comes back.

Last year civil servants got off easy. They weren’t hit with any sequestration-triggered furloughs.   Nor was there a shutdown. Pols and the public were still recovering from 2013’s furloughs that were followed by a shutdown.  Because of the fallout, many pols said never again. But in Washington’s short attention span political world, “never again” is a relative term.  It can often mean let’s skip a year and do something stupid the following year. This, if it happens, is a following year.

There is always the chance of last-minute action to avert or delay a shutdown. It’s happened before and some are working to do it again. But agencies must plan for the worst until told to carry on.

Feds who were furloughed in 2013 didn’t get paid for the time they were not allowed to work. Many took a 20 percent pay hit. Thousands got help from the Federal Employees Education and Assistance Fund. It paid bona fide bills and then the workers repaid FEEA.  Demand was so high FEEA temporarily ran out of money.

Workers did a little better in the 16-day shutdown of 2013.  They eventually got paid but for some the check was delayed two to four weeks. That was a disaster for people who live paycheck to paycheck.  (Folks in Congress and the White House continued, of course, to get paid on time.)

Politicians of both political partieswho shared equally in making 2013 a rotten year for feds denounced the furloughs and the shutdown. Most agree the shutdown cost a ton of money in both lost or delayed revenue collection, as well as services denied the public.

But that was then and this is now. The prospect of a 2016 shutdown, once considered unlikely, is now a real threat.  Congress as per usual has again failed to pass appropriations bills to fund agencies in the new fiscal year, which starts Thursday.  Only the approval of a continuing resolution (stopgap spending authority) can prevent a shutdown.

Using guidance from the Office of Management and Budget, agencies have drawn up shutdown plans. Individual agency guidelines will determine which services continue, and which employees will be required to work and those who won’t be allowed to work.  Neither will be paid during the shutdown (which would seem to violate a passel of federal laws).  Congress could, as it usually does, vote to pay everybody idled by a shutdown. That would make it  the biggest and most unpleasant mass vacation of the year.

Paying people not to work doesn’t seem to make much sense.  But again, we’re talking politics, not logic.

For some this is the last chance to do something stupid. There isn’t likely to be a shutdown threat in 2016, because if it happened it would happen right before the election.  So it’s now this week, next week or sometime this year or never.

Until 2017 when it could be deja vu all over again.

A banana is a type of berry but a strawberry is not.

Analysis: shutdown less likely, but one in December lurks 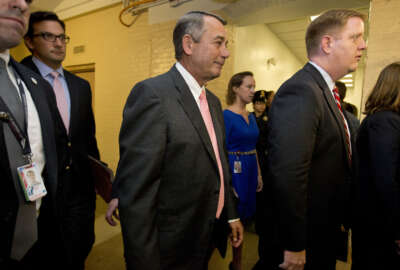