This time it’s all in the family time!

Like many decent folk, I do not covet, or purchase blood diamonds.

I have nothing but contempt for the people who kill elephants for their ivory. Or who slaughter rhinos for their horns. Or for the old guys who drink rhino powder because they believe it’s an aphrodisiac. I believe in giving to charity and practicing what I preach. I am not running for sainthood, but I do I feel good when giving money that will help strangers whom I will never know or who will ever know me.

There is something to the old saying that charity begins at home. Like right now.

Florida, Georgia, South and North Carolina are jammed packed with federal installations, and federal workers. They are also favorite spots for federal and military people to retire. Lots of times those of us in the frozen north envy them. Not today.

If you’ve watched the news on TV or checked your favorite newspaper you know that the southeast Atlantic seaboard has been slammed by Hurricane Matthew — packing 140 mile-an-hour winds — which moved very, very slowly causing major damage to property and people’s lives. U.S. based charities (again) rushed to help out Haiti, which was hit very, very hard. But there were lots of Americans in harm’s way too. Let’s not forget about them. They count too. And contributions and relief from Europe, Asia , Latin America and Africa aren’t exactly rolling in. As they never do.

So who does that leave to help? How about the person you slept with last night?

There are lots of ways to help. One of them is FEEA (Federal Employees Education and Assistance fund). FEEA is a feds-helping-feds charity. It makes low-cost loans (to help people pay bills, or get by when furloughed). It also makes grants. Provides modest scholarships, etc. A couple of years back, when tens of thousands of feds were furloughed (taking the equivalent of a 20 percent pay cut) FEEA ran out of money making loans to hard-pressed feds so they could pay the rent, or buy groceries. Sure, everybody should have a cash reserve of at least nine months salary, but lots of people don’t.

FEEA is an expert with after-action hurricane relief in Florida, Louisiana, or wherever and whenever they happen. After Hurricane Andrew, FEEA’s then-executive director Steve Bauer flew into Miami with envelope full of cash. After airport authorities determined he was not a drug dealer they took him in government vehicles to Homestead Air Force base. With ATMs down and banks closed, people needed cash to buy food and water. Repeat that two dozen times in other places and you have the story.

When the federal building in Oklahoma City was attacked by domestic terrorists, FEEA learned that 200 children — from teenagers to one as yet unborn — had lost at least one parent. Two hundred orphans, just like that. FEEA, with the help of other feds and people like GEICO and Blue Cross-Blue Shield, made a promise. In a sense the promise was in our name. It said that those children, the orphans of Oklahoma City, would get a full ride scholarship to any college or university they could get into. Most made it. Many went into social work, medicine, the so-called “caring professions” or went to work for Uncle Sam. Like their mother or father. FEEA did the same thing following the 9/11 attack on the Pentagon.

You can give to FEEA via the Combined Federal Campaign. Money taken from your check in installments. And that’s great and that’s what FEEA counts on for day-to-day operations. But right now lots of feds in the southeast need it now. Like yesterday. If you’re interested in helping out, click here.

Whether it is flying down to a disaster site with cash on hand as FEEA did after Hurricane Andrew or sending checks to workers who scattered to 38 different states as it did after Hurricane Katrina, the FEEA fund’s  mission is to assist civilian federal and postal employees whenever the need arises. In fact, as FEEA celebrates its 30th Anniversary year it is proud to have helped over 17,000 federal employees with over $12 million in emergency help just when they needed it most.

FEEA Senior Adviser Steve Bauer noted that “so many times when disasters like this strike, federal employees are out there helping their fellow countrymen when their own homes have been damaged, their own cars ruined, or their own families are in danger.”  We must support them because they help keep America strong every day.

FEEA is not a government agency but is a non-profit charity governed by current or former federal employees themselves.   A CFC charity (pledge #11185) that you can support by pledging to them now —or you can donate right now online at www.feea.org to help ensure there is enough money to assist all of the federal employees impacted by the rage of Hurricane Matthew.

How to make innovation a (federal) way of life 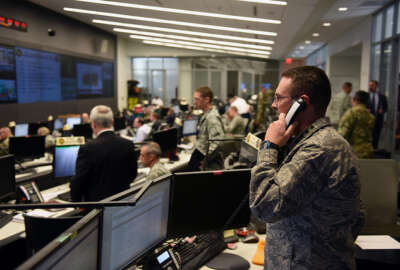 When responding to Hurricane Matthew is your job