Federal infrastructure projects have stalled around the country due to cumbersome permitting processes and funding challenges, which is why a bipartisan law was enacted two years ago to speed things up.

Now the authors are hoping to amend that legislation with the Federal Permitting Reform and Jobs Act, which would remove the seven-year sunset provision of FAST-41, cover more projects and set a two-year permitting goal for those projects.

Federal infrastructure projects have stalled around the country due to cumbersome permitting processes and funding challenges, which is why a bipartisan law was enacted two years ago to speed things up.

Now the authors are hoping to amend that legislation with the Federal Permitting Reform and Jobs Act, which would remove the seven-year sunset provision of FAST-41, cover more projects and set a two-year permitting goal for those projects.

FAST-41 is a section of the Fixing America’s Surface Transportation (FAST) Act, and was designed to improve timeliness, predictability, and transparency of federal environmental reviews and authorizations for covered infrastructure projects, according to Performance.gov. It established the Federal Permitting Improvement Steering Council and codified the Permitting Dashboard to track project timelines.

The Senate Committee on Homeland Security & Governmental Affairs held a roundtable June 27 with representatives of federal agencies and other stakeholders to offer their feedback on beefing up the law. And as committee Ranking Member Claire McCaskill (D-Mo.), Chair Rob Portman (R-Ohio) and Sen. Kamala Harris (D-Calif.) heard, not all participating agencies are on the same page.

Jolene Thompson, executive vice president for Member Services and External Affairs at American Municipal Power Inc., offered her company’s RC Byrd Hydro Plant project in an existing U.S. Army Corps of Engineers dam on the Ohio River as an example. It started before FAST-41 took effect but was included in the statute’s initial inventory.

“We understand the need to balance environmental protection with development,” Thompson said. “However, the distinct [Federal Energy Regulatory Commission] licensing and then Army Corps and resource agency permitting processes for hydropower are especially arduous, often duplicitous and typically take more than a decade.”

Thompson recommended providing the appropriate resources for the steering council, and broadening the scope of its process to resolve disputes between state and federal agencies, as well as between developers and agencies.

A frustrated McCaskill asked Angela Colamaria, acting executive director of the steering council, what can be amended in the FAST Act to make sure federal agencies communicate better and participate in FAST-41. Colamaria said that FERC, an independent agency, does participate in several FAST-41 projects and on the steering council, but some statutory limitations exist.

“We are working with FERC environmental staff, licensing staff and their general counsel to think of creative ways to move forward so that they can still continue their coordinating roles with agencies and use all FAST-41 tools while still maintaining their independent agency status,” Colamaria said.

She also said those limitations are keeping FERC from posting all their information and deadlines to the FAST-41 dashboard. McCaskill said it would be helpful to have language that is more directive, rather than discretionary, in the law to keep agencies to a project timetable.

Drawing the shades on the sunset provision

Other recommendations were offered during the roundtable applied to FAST-41’s seven-year sunset.
Joseph Johnson, executive director of Federal Regulatory Process Review and Analysis Environment, Technology, and Regulatory Affairs at the U.S. Chamber of Commerce; and Christy Goldfuss, senior vice president of Energy and Environmental Policy at the Center for American Progress, advocated for the change.

“Seven years is just too short to make sure that we get this fully implemented, that we have success stories and that we can show that this process really works,” Johnson said.

But Goldfuss specified she wished to see the sunset removed only for provisions in FAST-41 which have not yet been tested, namely the judicial review process. She suggested looking for a time when Congress can revisit them.

Roundtable participants also expressed dismay that a permanent executive director for the steering council was still not appointed. Goldfuss said a political appointee was “particularly important in this role to demonstrate to departments and agencies the level of priority commitment from White House.”

“The same is true for project sponsors who may question the legitimacy of FIPSC without political leadership,” she said. “This person would have broad authority to advance the group’s mission and move large projects forward.”

Meanwhile, Colamaria told Portman that the steering council is requesting about $6 million from the fiscal 2019 budget to address operating costs and FAST-41 implementation costs. The council received $1 million in FY 2018, compared to the $10 million it requested for that budget year, she said. 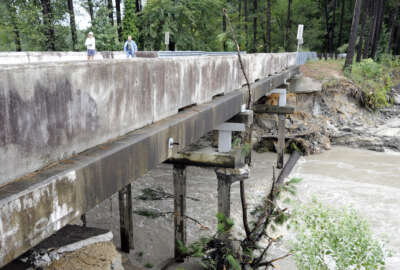