With telework agreements scaled back at the Agriculture and Education departments, the practice’s future at other agencies also may hang in the balance.

“We are hearing that the policy being enunciated at Education is a forerunner of a broad retreat on telework throughout the federal government by the Trump administration,” Rep. Gerry Connolly (D-Va.) said in an...

With telework agreements scaled back at the Agriculture and Education departments, the practice’s future at other agencies also may hang in the balance.

“We are hearing that the policy being enunciated at Education is a forerunner of a broad retreat on telework throughout the federal government by the Trump administration,” Rep. Gerry Connolly (D-Va.) said in an interview with Federal News Radio.

According to an internal memo from May, Education will require most employees to work in the office at least four days a week, starting on Oct. 1.

In a recent meeting with Jared Kushner, the head of the Office of American Innovation, and Chris Liddell, the White House deputy chief of staff for policy coordination, Connolly raised concerns that cuts to telework would hamstring the Trump administration’s ability to build a 21st-century workforce as envisioned in the President’s Management Agenda.

“I told them that it would be kind of contradictory to be promoting technology while constraining its deployment in the form of telework,” Connolly said. “I think that makes no sense at all, and frankly contradicts what they say they’re trying to do.”

The White House declined to comment for this story.

While there’s no clear indication yet if other agencies plan to scale back their telework policies, it also remains unclear if other agencies will continue to expand their programs. Thirty-seven agencies saw double-digit growth in the use of telework between 2015 and 2016, but recent data also suggests the trend may have plateaued.

According to the Office of Personnel Management’s most recent report to Congress, governmentwide participation in telework rose from 20 percent in 2015 to 22 percent in 2016.

But in the same period of time, the number of federal employees eligible for telework fell from 44 percent to 42 percent.

“The percentage of employees who are eligible to telework remains relatively stable and does not appear to be increasing,” OPM wrote in its report. “As we have consistently and regularly advised agencies, OPM again recommends that agencies support the use of telework by regularly reassessing individual employee eligibility determinations.”

Connolly, a cosponsor of the 2010 Telework Enhancement Act, said he’s not yet convinced telework’s best days in government are already behind it, but expressed frustration over the rollback of policies at Education and USDA.

“We’re well beyond getting telework off the ground,” he said. “We’ve made remarkable progress in the last 10 years, since I first got here and started advocating for telework for federal employees. And so to see this kind of retreat is really very disheartening.”

“Chairwoman Foxx believes that the Education Department’s secretary has the authority to make this change to the department’s personnel policy, and the chairwoman will not be making further comment on this matter,” Marty Boughton, the committee’s deputy press secretary, wrote in an email to Federal News Radio.

Education’s telework policy rates highly among its employees, but in recent years, agencies have also relied on telework to ensure continuity of operations during snowstorms.

“Increasingly, agencies are using telework to diminish the disruption that severe weather events and other events may have on agencies’ abilities to accomplish their missions,” Government Accountability Office wrote in a February 2017 report.

OPM has also recommended telework for high traffic events like the Washington Capitals parade following its Stanley Cup victory, Pope Francis’ visit to the capital in 2015 and an unplanned one-day shutdown of the D.C. metro system in spring 2016.

“Every agency needs to have a robust continuity of operations plan, in the event of a national event or a human event interrupts or prevents the ability of the workforce to get to its place of employment,” Connolly said. “We know from snow emergencies in the nation’s capital, for example, that the telework program allows us to operate without major interruptions. Only technology and its deployment through telework allows us to do that. And so, if you cut back, as the Education Department would, to no more than one day a week, you’re going to disrupt your ability to have a continuity of operations plan that is robust.”

Education employees are ineligible for telework if they’ve been officially disciplined for being absent without permission for more than five days in a calendar year, or officially reprimanded for viewing or downloading pornography on a government computer.

Employees also cannot telework if they’ve been put on a performance improvement plan (PIP). Recent hires still within their probationary period may also face limitations on their ability to take telework.

Over the past several months, the agency has conducted an impact study across all offices looking at the implications the new policy will have on office space, IT infrastructure and physical security.

“This is a regression that I think will make it harder, not easier to recruit the workforce of the future. Now, maybe that’s the intent?” Connolly said. “Maybe in a kind of perverse way, the folks who were doing this at both the Department of Education, and maybe to a lesser extent the Department of Agriculture, actually kind of hope to discourage people from applying for federal employment. I think that would be a real perversion of your responsibility as the secretary of an agency to make it the best possible workplace you can.” 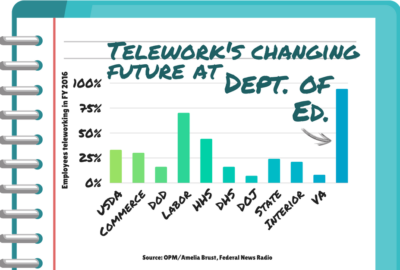