Changes to the Defense acquisition systems are likely to be at the top of the list for things the Senate Armed Services Readiness Subcommittee will investigate in the coming year.

Subcommittee Chairman Sen. Tim Kaine (D-Va.), who is taking hold of the gavel for the first time, says he wants an update on where the Defense Department is on implementing the hundreds of reforms Congress sent the Pentagon over the past five years.

Changes to the Defense acquisition systems are likely to be at the top of the list for things the Senate Armed Services Readiness Subcommittee will investigate in the coming year.

Subcommittee Chairman Sen. Tim Kaine (D-Va.), who is taking hold of the gavel for the first time, says he wants an update on where the Defense Department is on implementing the hundreds of reforms Congress sent the Pentagon over the past five years.

“Sometimes we on the legislative side will put in new reforms before the last round has been fully integrated, and before we understand whether the last round of reforms had success or not,” Kaine told Federal News Network. “If I could be self-critical about the committee, I think sometimes we do things and then we don’t come back and ask, ‘What were the effects?’”

Kaine pointed to a cut in headquarters staff that Congress mandated as an example.

“A couple years after that we had huge crises and challenges in the military housing program,” Kaine said. “Turns out that one of the reasons for that is the arbitrary cut of headquarters staff. The military housing staffers were significantly reduced, which made it harder for them to exercise oversight over the private housing contractor. Sometimes we do things and then we don’t go back and ask, ‘Okay did it work out the way we thought?’ I’m going to be pretty wary about advancing new acquisition reforms right away.”

There has been some animosity between DoD and Congress over the reforms put in place, mostly between 2015 and 2018. While DoD is mostly happy about its new powers, like other transaction authorities and mid-tier acquisition, it is still slow to adopt all of the measures Congress created.

Former Navy Secretary Richard Spencer said in 2018 that DoD needed a stabilization period from the influx of reforms.

However, a year later in 2019, then-House Armed Services Committee Ranking Member Mac Thornberry said he was considering withholding funds from DoD for not implementing the changes.

“There are some basic constitutional principles here,” Thornberry said. “If the law says you should do it, you should do it. We have tools, fencing money, and a whole variety of things that we can look at doing if a department is not implementing the law.”

Kaine says he wants to make sure DoD is comfortable with the changes and see what has actually been put in place before he continues working on a Defense acquisition system that even the Pentagon admits can be slow and laborious.

Kaine also said he’d like to continue investigating military housing companies. About two years ago it came out that service members and their families were living in privatized military housing with lead paint, mold, mice and other substandard living conditions. They had no way of forcing the companies managing the homes to help them.

Congress put in place legislation to help families, like a tenant bill of rights, but there are still parts of that document that are hitting resistance with the companies, and families are still facing unacceptable housing conditions.

“The whole privatization of military housing depended upon the military really taking seriously the oversight and management of the contracts,” Kaine said. “As you saw over and over again, once they entered into the long term deal they didn’t even take advantage of provisions within the contracts that they had that were available to the Pentagon to renegotiate, to reconsider or to withhold payment for unsatisfactory performance. They just decided that ‘Okay, we entered into a contract; we’re no longer responsible to the country.’ They’re definitely responsible.”

Kaine said it is possible the the whole Senate Armed Services Committee might take up the issue. 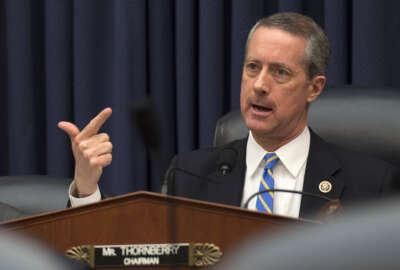 Congress gets high marks from military services on acquisition reforms