As mask mandates return, Congress has something to say

You’ve probably guessed that it’s too soon to make a bonfire out of your face masks. In fact, mask mandates are back on here and there, such as for unvaccinated federal employees who want to return to the office. A sort of mini mask war has broken out in Congress, as WTOP Capitol Hill correspondent Mitchell Miller...

You’ve probably guessed that it’s too soon to make a bonfire out of your face masks. In fact, mask mandates are back on here and there, such as for unvaccinated federal employees who want to return to the office. A sort of mini mask war has broken out in Congress, as WTOP Capitol Hill correspondent Mitchell Miller explained on Federal Drive with Tom Temin.

Tom Temin: And Mitchell, first of all, let’s get to the Capitol Hill reaction that you have heard so far on the way the Biden administration is treating vaccines and federal employees.

Mitchell Miller: Right. Well, Congress is reacting to these requirements like the unions are that are representing various federal workers. There’s disagreement over making these requirements. Virginia, Maryland and D.C., as you know, have hundreds of thousands of federal workers, and I spoke to Virginia Senator Tim Kaine (D) about the new requirements, he believes that they are fair, and as a member of the Senate Armed Services Committee, he says he applauds the VA for being the lead agency early last week to announce its plan to require vaccinations for its frontline health care workers last week. [Rep.] Gerry Connolly (D-Va.), who also has a lot of federal workers and contractors within his district, he is also supporting all of these plans related to the president’s announcement. But on the other side, many Republicans are sharply critical of new requirements, saying this is just another example of federal overreach. And they’re also focusing their ire at the CDC. Some, including Senator Marco Rubio (R) of Florida have called for the General Accounting Office to investigate the CDC for its latest guidelines, and how they came about reversing some of the changes that had been made earlier on mask wearing. So, a little bit of a battle here going on, on Capitol Hill.

Tom Temin: And are the members themselves battling; some masked, some unmasked?

Mitchell Miller: Absolutely, this is a huge battle here on Capitol Hill. Now, of course, with the House leaving town, that battle will subside for a while, but last week, it really broke out in a big way. At one point House Speaker Pelosi (D-Calif.) calling the House’s top Republican Kevin McCarthy (Calif.) a moron. She later softened some of that language. But he went right back at her and had a lot of critical things, again, to say about the CDC, as Marco Rubio has had. In terms of actually wearing their masks, it’s really interesting because 100% of Democrats say they have been vaccinated here on Capitol Hill. However, if you do the math, Kevin McCarthy says about 85% overall of lawmakers have been vaccinated, and that leaves at least 60 or more Republican lawmakers who have not been vaccinated, or at least who have not publicly acknowledged they’ve been vaccinated. And this is really caused a big clash. There was actually a moment last week where many House Republicans walked across the rotunda here at the Capitol basically to make the point that the House is being required to wear masks on the House floor. Whereas in the smaller Senate where virtually everyone is vaccinated, there is not a requirement but only a recommendation. So here in the Capitol complex itself, you do see everybody again wearing masks for the most part, but there are some lawmakers who are not. And several of them have actually been fined $500. A few of them are filing suit in U.S. District Court to try to get that reversed. So it’s a big battle here on Capitol Hill.

Tom Temin: Crazy. Like they say, we’re better than our politicians. And meanwhile, they have been doing some work on behalf of the nation here. And there was a House passed package of seven of the spending bills for 2022. So that looks like a little piece of progress.

Mitchell Miller: That’s right. Whether or not there’s still battle going on with masks, they are getting some things done. The House late last week passing that seven-bill minibus, $600 billion, and it also includes earmarks for the first time in a while. Of course this funds several federal agencies, including Agriculture, Transportation, Labor, Education, Health and Human Services. Among those, Education would get an increase of about 40%. So the House now overall has passed nine of its annual spending bills. But, as you know, we are still not on track to get everything done by October 1. And that means Congress is still headed toward a likely continuing resolution to prevent another government shutdown about two months from now. Meanwhile, on the Senate side, appropriators this week starting their work. They’re marking up the first of three spending bills for Agriculture, Energy, and Veterans Affairs, which are, frankly, in terms of appropriations, sort of the low hanging fruit for senators, but of course, they cannot get all of these done on time before they break later this week. So, there are still some trouble spots in terms of appropriations, they’re the ones that are usually a lot more difficult to sort out where you have progressives and centrist with different goals. Those include funding for the Pentagon, Homeland Security, and the Justice Department.

Tom Temin: We’re speaking with Mitchell Miller, Capitol Hill correspondent for WTOP. And you mentioned before they leave, what is the schedule looking like for the next few weeks?

Mitchell Miller: It’s really interesting, especially with this two-track plan for infrastructure. So senators and staff work through the weekend on the bipartisan infrastructure bill. They formerly have opened debate on the $1 trillion package, and that includes, of course, $550 billion in new spending, covering hard infrastructure items like roads, bridges, water systems, broadband, and the like. And they are trying to also get a budget resolution together for the $3.5 trillion budget reconciliation part of the infrastructure package. Democrats, since they’re going it alone are going to try to hold together their conference, of course need all 50 votes to go through reconciliation. Still a bit of a question about what’s going on with West Virginia’s [Sen.] Joe Manchin (D) and Arizona’s Kyrsten Sinema (D). They say they’re basically willing to move this process forward, but they do have some concerns about the costs. But even if everything were to fall into place, as Senate Majority Leader Chuck Schumer (D-N.Y.) would like this week, these massive pieces of legislation are still really not going to get final approval until later this year. And then there’s also the question about what is going on with the House. Of course, the House is now on break, and is not scheduled to be back until September. But, if things go the way some of the Democrats hope, they will possibly be called back sometime this month. So we’ll see what happens. But, still a lot of twists and turns on this infrastructure packaging. It’s really very interesting, a high wire act, of course, for the Senate majority leader as he tries to get both of these massive spending plans moved through Congress.

Tom Temin: Interesting. Yeah, a lot of work to do. And also the hearing, there was one hearing at least on the Jan. 6 breach of the Capitol that seemed inconclusive, although we heard some more horrifying details of what did go on there, vis-à-vis the Capitol Hill police members that testified. What happens next here, if anything?

Mitchell Miller: Well, the committee, the select committee from the House, has met again, they met again on Friday, and they’re basically trying to plot out their game plan for the next few months. Of course, that big hearing last week, where you had to Capitol Police officers, as well as two MPD [Metropolitan Police Department], or D.C. police officers, testify, as you said, really brought a lot of attention back to this issue, because Jan. 6, as some of the officers said, has never gone away for them. And it really has not gone away for a lot of the lawmakers here on Capitol Hill. So, I think the chairman, Bennie Thompson (D), the Mississippi congressman, is indicated that he wants to keep things moving, and he indicated before the House broke that they would possibly come back sometime later this month, they’re still trying to determine whether that would actually be a hearing and who would be called. In the meantime, they’re trying to figure out who they might subpoena and who might be likely witnesses. There’s a lot of talk about whether or not former President Trump could actually somehow be subpoenaed, but that of course, would probably lead to a very lengthy legal battle. But there are others that they’re talking about, including House Minority Leader Kevin McCarthy who spoke with the former president on Jan. 6, as well as some other lawmakers who were involved in that day. So a lot of things still moving forward on Jan. 6. Some Republicans say that Democrats are just trying to drag this out and trying to cause political damage as we go into the midterms next year.

Tom Temin: Mitchell Miller is WTOP Capitol Hill correspondent. Thanks so much. 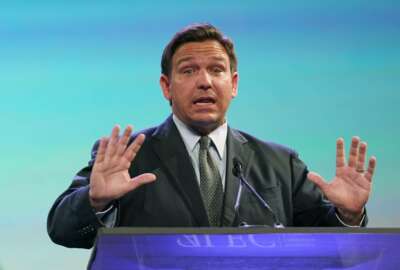