Money is starting to flow via federal contracts on work related to taking on the coronavirus. And Bloomberg Government has compiled a list together with some guidance. For details, B-GOV’s Director of Contracts Dan Snyder joined Federal Drive with Tom Temin.

Interview transcript:
Tom Temin: Dan, good to have you back.

Money is starting to flow via federal contracts on work related to taking on the coronavirus. And Bloomberg Government has compiled a list together with some guidance. For details, B-GOV’s Director of Contracts Dan Snyder joined Federal Drive with Tom Temin.

Dan Snyder: Good morning, Tom. Thanks for having me.

Tom Temin: What is the situation now? The money is increasing from Congress, and it looks like the money is starting to actually flow through vehicles and different contracts. Tell us what you’re seeing.

Dan Snyder:  So Bloomberg Government has compiled a report that primarily investigates three components. The first is agency guidance. So that’s all the information being released by the Office of Management and Budget as well as OPM. And then there’s a few select agencies that have also directly issued guidance to contract. The second component investigates spending being dispersed by federal agencies as well as opportunities that are available for bid at these agencies. And then the final component investigates what contractors may be able to anticipate ahead. And a lot of that is geared around payments, perhaps being stalled, but not necessarily stopped.

Tom Temin: Got it, so not stopped. And what kind of dollar volumes are you seeing?

Dan Snyder:  Bloomberg Government has put together a definition specifically around coronavirus spending, and we’re a little conservative in our analysis. But since the time we created the definition last week, on about Wednesday we saw $35 million that was being dispersed by federal agencies. Now fast forward to today, and a lot of that is seeing a tremendous uptick. So as of today, that spending around coronavirus has increased to $225 million that is being dispersed by federal agencies, the vast majority of which is being released by HHS. That agency alone constitutes $195 million of the $225 billion seen so far.

Tom Temin: What is it they’re spending it on?

Dan Snyder:  That’s a great question, Tom. So the top company that we’re seeing is a division of Johnson & Johnson, and they are working with a bureau out of HHS known as BARDA, or Biomedical Advanced Research and Development Authority, to do some clinical studies on a cure for coronavirus itself. Now other companies that we see at the top include Rapid Deployment Inc., who has generated the majority of their spending obligations through a $17 million contract for emergency response services. And then there’s others, such as 3M and Alcazar, who are also in the mix. And 3M has generated the majority of their obligations, delivering respirators and then Alcazar through custodial services are making sure that the hygiene is up to date at offices throughout SSA.

Tom Temin: Now late last week, the Office of Management and Budget gave agencies some discretionary authority to maybe convert existing contracts and bend them toward coronavirus. Are we seeing any evidence of that going on yet?

Dan Snyder: So agencies have been doing a tremendous amount to adapt to these changes. We’ll give them credit. It’s not an easy task to pivot so quickly. So the White House issued their most recent guidance so far. They’ve issued five memos since March 15, the latest of which were over the weekend on March 20 as well as March 22. The March 22 notice dealt with managing federal contract performance during the coronavirus era. The highlights included in that memo were encouraging agencies to leverage, special procurement authorities authorized with the president’s emergency declaration and also taking advantage of mechanisms such as the micro purchased threshold and simplified acquisition threshold. In addition to that, there is a March 22 memo issued by the White House titled “Harnessing Technology to Support Mission Continuity.” And a lot of that guidance was focused around cybersecurity authorizations and providing federal employees solutions for accessing certain applications to access the databases they need to get their job done. The OPM and White House information that we have seen to date is mostly speaking directly to federal agency department heads. There has been some other specific guidance issued by Soraya Correa at DHS that focused on how contractors should deal with their communications to contracting officers. There is another issue by FEMA, which outlined two specific criterias. But most of that is – the bottom line is to convey to contractors that there is no need to stop the work unless you specifically get a stop work order from the contracting officer at this stage.

Tom Temin: We’re speaking with Dan Snyder. He is director of contracts at Bloomberg Government. And let’s pivot to a moment, to the upcoming bills or some have passed, some are going to be passed. That $8 billion in funding from a couple, well it seems like an eon ago but it was actually only, I think last week, and then there’s –

Tom Temin: And then there’s some $46 or so billion for the operation of the government itself. That’s aside from the stimulus bill. And so what do you anticipate those funds converting to in terms of contracting opportunities?

Dan Snyder: So the first one that has been passed allocated – that’s the $8 billion bill – has allocated $6.5 billion specifically to HHS and then the remaining balance $1.25 billion to the State Department and $20 million to the Small Business Administration. So for contractors, and that first one is likely going to be most addressable to help agencies fulfill their needs. And certainly not a surprise that the best majority at HHS is going to areas such as public health, social services, emergency fund received $3.4 billion. CDC: $2.2 billion. So for contractors that first bill, maybe most interesting, is they think through what the addressable market may be to help agencies get through the coronavirus challenges. The second bill, the $46 billion, is more for assistance to companies who are suffering through many of the challenges that we are facing with coronavirus. On the large majority of that bill, $17.7 billion would go to VA. An additional $11.5 [billion] would go to HHS, DoD would get $8.3 billion of that $46 [billion], DHS – $3.2 [billion] and OMB would get $3 billion. And a lot of that money would be for agencies to continue their operations.

Tom Temin: So for $17 billion for VA to continue operations and other civil defense programs, $13.1 billion of that is for medical services account. What are they expecting at VA that is so outsized?

Dan Snyder:  Well, certainly being the biggest health system they want to make sure that the veterans are being taken care of, and they’re receiving the care that they deserve. One of the issues that will OPM specifically outlined in one of their five memos was the March 20 {one] that gave VA flexibility to re-employ retired subject matter experts and deploy them to where they are needed the most. So I think that 17.7 billion would help them augment many of the surplus medical care that is needed at these facilities to ensure that veterans are receiving the care that they need.

Tom Temin: And do we know anything about the $3 billion for new unanticipated needs account at the Office of Management and Budget?

Dan Snyder:  So OMB is going to be responsible for dispersing all of the guidance to federal agencies so they will be the focal points as agencies pivot towards new needs. So a lot of that unanticipated needs will allow them the flexibility to perform these activities, but they may not be able to foresee in the future.

Tom Temin: And what’s the best way for contractors to get all of this so that they know what’s going on and can try to bid for some of this work?

Dan Snyder:  So we’ve seen a few small opportunities being released at five federal agencies. We’ve seen the CDC issue a blanket agreement or a BAA, and that was specifically around research for COVID-19. And then we’ve also seen the Medical Technology Enterprise Consortium issue a white paper, and they were encouraging contractors to respond in 48 hours despite the opening date remaining until the end of March. So we’re seeing a lot of these new mechanisms that contractors have been familiar with in the marketplace reinvigorated in new ways that Johnson & Johnson award that constitutes $150 million of the $225 million was also through an OTA. So we’re seeing this expedited purchasing mechanism being taken advantage of by these agencies as they seek to find respirators and new technology solutions that may not currently be available in the marketplace.

Dan Snyder:  Yeah, So when we discuss, telework the primary point to pay attention to there is that will be the increased mechanism by which you will be able to discuss matters with your contracting officers. So you can expect to continue to communicate with your contracting officers through telework. Telehealth is certainly a market in which we anticipate increased growth. But I’m not sure that will be in the form of new contracts. A lot of those are currently stood up. We’ll just see an increase in the output of those services being delivered.

Tom Temin: Dan Snyder is director of contracts at Bloomberg Government. As always, thanks so much.

Tom Temin: We’ll post this interview at www.federalnewsnetwork.com/FederalDrive. Subscribe to the Federal Drive at Apple Podcasts or Podcastone. Stay up to date on your agency’s latest responses to coronavirus. Visit our Special Resource page at federalnewsnetwork.com. 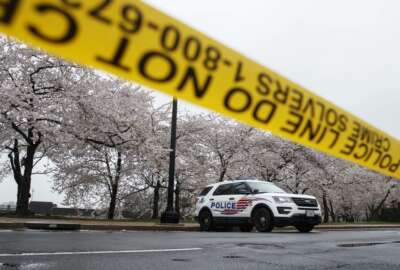