An agency learns an old procurement lesson: Judge bids how you say you will

It seemed like a long shot. But an IT contractor successfully protested an award made by the National Geospatial Intelligence Agency, even though the protester had higher prices. But the NGA failed to follow its own plan for how it would evaluate bids. Federal Drive with Tom Temin got the details from Smith Pachter McWhorter attorney Joe...

It seemed like a long shot. But an IT contractor successfully protested an award made by the National Geospatial Intelligence Agency, even though the protester had higher prices. But the NGA failed to follow its own plan for how it would evaluate bids. Federal Drive with Tom Temin got the details from Smith Pachter McWhorter attorney Joe Petrillo.

Tom Temin: Joe, this seems like a garden variety procurement. But it really shows what can happen when the agency doesn’t do everything to the letter, doesn’t it?

Joe Petrillo: Yeah, absolutely. It does show some interesting issues here. And procurement is a pretty garden variety, as you say, procurement of IT support services. And it’s going to be for an eight year term if all the options are exercised in support of the National Geospatial Intelligence Agency. The evaluation criteria were pretty standard. Technical management, past performance, security, which was pass-fail, and price. And the technical management factor and several sub factors, the most important of which was management plan, the most important sub factor, that was the evaluation scheme that we set out. They solicited proposals, got a bunch of offers, evaluated them, conducted discussions, evaluated the revised proposals, and after that they then considered whether or not to make an award.

Joe Petrillo: Now let me just ask you this, this was a task order under an IDIQ or a GWAC or they simply went to the open market with a new proposal. This was open market and RFP open to all comers. I think it was restricted to small businesses. But other than that, it was an open procurement. At the end of the day, the evaluation showed that CARS (Chenega Agile Real-Time Solutions)had an outstanding evaluation for technical management, basically, based on the outstanding part of its management plan.

Joe Petrillo: And that was the winning bidder, TekSynap , who turned out to be the protester had a good under that which was one level down in evaluation, and a slightly higher price. In spite of that TekSynap felt that it hadn’t been evaluated properly. And so they filed a protest at the Government Accountability Office. One other problem that TekSynap app had with their proposal was that there were some discrepancies in the price proposal and it was considered incomplete and therefore eliminated from evaluation. The agency had considered whether or not to reopen discussions to allow TekSynap in app and another bidder with similar problems in their offer to revise the proposals and here are these problems. But they decided since CARS had an outstanding evaluation and the most important criterion not to go forward with that. In terms of the bid protest, one of the issues was did CARS really deserve the outstanding evaluation for management plan. And the problem there was that of the three key personnel, one of them did not have all the minimum necessary qualifications. solicitation laid out some minimum and desired qualifications, one of those people offered clearly missed out on one. Now the solicitation did not say that failure to meet a minimum mandatory qualification would require a rejection of the proposal. And so GAO, based on its case law said that wasn’t required. The question was with that type of deficiency, or weakness, is it appropriate to give them the highest score? And GAO parsed the descriptions of how you achieved the different scores. And based on the evaluation of the agency, it seemed that the failure to meet the minimum qualification should not have enabled an outstanding score. So they upheld the protest on that ground and said that the outstanding rating was not justified on the record.

Tom Temin: We’re speaking with attorney Joseph Petrillo of Smith Pachter McWhorter. And did that change the award to TekSynap, or did that just make the agency have to reevaluate all the bids?

Joe Petrillo: There was actually another big protest issue on which the protester prevailed. And that is, was its evaluation appropriate? And what happened was, if you looked at the technical management evaluation team report, they describe the proposal in terms of the management plan in glowing terms, they seemed to be saying that it met all the criteria for an outstanding evaluation, they seemed to be saying that they’ve had more significant strengths than it really did. And GAO looked at that and then looked at the ultimate grade of simply good, and questioned that as well. It didn’t meet the criteria that the agency had laid out if you looked at the words of the evaluation. So that’s the second problem with the evaluation. Those two issues called into question the agency’s decision not to reopen for discussions to cure some fairly minor problems with the price proposal. So the protest was sustained. And the agency now has to either make a proper evaluation or open proposals for another round of discussion.

Tom Temin: Yeah, interesting. So what I’m hearing is the main lesson here is if managerial quality is the top criterion, and some of the people that are part of the management in the bid don’t have the minimum requirements set out in the solicitation, then it’s pretty hard to imagine how you could get an excellent or a top rated managerial score if your people don’t meet the basic criteria.

Joe Petrillo: Yeah, that makes sense. The bottom line is you need consistency between the actual facts of the evaluation, and the scores and judgments that are made based on those facts. If they’re not adding up, then GAO has got a problem with the word decision.

Tom Temin: Yeah, and it’s probably a good idea if a couple of contractors are incomplete or something in the pricing area. I mean, if you have three bids, or five bids, and three or four of them are incomplete, that’s a sign that maybe there was something unclear about the solicitation, and you probably should have those discussions, to as you put it cure the deficiency in the bid. At least then everyone’s on a level playing field.

Joe Petrillo: Yeah, that’s right. I mean, there are issues that seem fairly minor in terms of disqualification. But the whole idea of having discussions is you get the proposals in a way that gives the government the best choices to make in terms of who its going to select as the awarding.

Tom Temin: Alright, well, lessons learned once again. Joseph Petrillo is a procurement attorney with Smith Pachter McWhorter. Thanks so much. 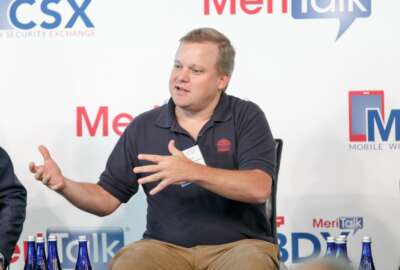 The federal spending calendar is getting decidedly lopsided