Declining spending begins to bounce back with rising budgets

After a six -year decline in spending, budgets have begun to bounce back in 2016, and contract spending is expected to follow that upturn shortly after as the trend continues into 2017.

“The big narrative that we’ve really been talking here is that ‘have we reached the bottom of the barrel?’” said Duncan Amos, deputy director of government contracts research for Bloomberg Government, during an Aug. 23 webinar. “We’ve been seeing decreased contract spending since...

After a six -year decline in spending, budgets have begun to bounce back in 2016, and contract spending is expected to follow that upturn shortly after as the trend continues into 2017.

“The big narrative that we’ve really been talking here is that ‘have we reached the bottom of the barrel?’” said Duncan Amos, deputy director of government contracts research for Bloomberg Government, during an Aug. 23 webinar. “We’ve been seeing decreased contract spending since about 2009, and this past year we just saw a decrease of about 1.5 percent. That’s pretty flat. And what we are seeing now is that budgets in fiscal 2016 are going up.”

Amos said that increase will continue, from what he’s seen so far, into fiscal 2017. All of that will lead directly to an increase in contract spending either this year or next year, he said.

In 2015, Amos said, the 1.5 percent spending decrease was likely due to the drawdown of forces in Afghanistan. In fact, despite the overall drop, civilian agency spending actually increased to 38 percent, the highest it’s been in 15 years.

Most of this spending, Amos said, falls into the services category. Roughly 60 percent of government spending is consistently on services.

Knowledge-based services topped this category in 2015, at $69.8 billion, or about 16 percent of the federal market. Defense largely dominated this category, with Army spending $11.6 billion, Air Force 9.4 billion, and Navy $7.6 billion. Health and Human Services was the top spender among civilian agencies at $6 billion.

Likewise, four of the top five companies that picked up these contracts — Northrop Grumman, Boeing, Lockheed Martin and Raytheon — are defense contractors. Their knowledge-based services ranged in value from $1.4 billion to $2.3 billion. The only outlier, at number three, was Booz Allen Hamilton, with $1.8 billion.

Facility-related services came in second for federal contract spending. Although the three military departments all made the top five, the Energy Department was the biggest spender at $19.2 billion. Most of the money in this category goes to running large national laboratories.

The largest product category in 2015 was technological equipment, at $26.6 billion. It just jumped ahead of aircraft spending for the first time.  Amos said it doesn’t necessarily mean computers or IT equipment, however. A lot of that money goes into tactical or high tech equipment like radar dishes, frequently bought by the Defense Department.

In fact, the three military departments spent the most in this category, with a combined total of $14.9 billion. The Defense Logistics Agency came in fourth at $2.8 billion. The only civilian agency to make the top five was the Department of Homeland Security, at $1.4 billion.

Technology services still topped equipment in spending, however, at $37.2 billion. The two categories combined increased by more than $1 billion in 2015.

Some particular industries are driving these changes in the overall market. For example, spending on drones has increased more than any other category in 2015. Another huge increase was land vehicles, which had been slumping due to the drawdown in Afghanistan, but increased 32 percent, largely due to purchases of the new Heavy Expanded Mobility Tactical Truck (HEMTT).

Spending on medical supplies has also increased due to pharmaceutical contracts with the Veterans Affairs Department, Amos said.

Finally, weapons and ammunition has increased significantly, thanks to a need for more guided missiles, the supply of which had largely been expended in the fight with ISIS.

The biggest overall drop in spending was on fuel, which decreased by $3.4 billion, primarily due to government taking advantage of lowered prices. 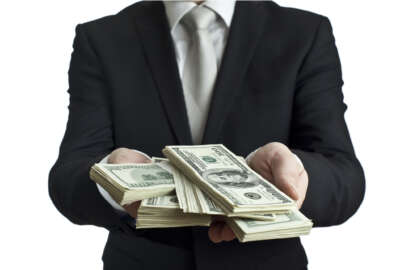 $142B in professional services contracts coming in 2017

That greener (industry) grass may hide some rabbit holes