The Navy’s premier research institution is placing its bets on its people and the speed of the delivering technologies rather than trying to predict where it should invest money heavily for future research projects.

The Office of Naval Research (ONR), led by newly established Chief of Naval Research Rear Adm. David Hahn, is changing the way it does business as the military tries to keep its technological advantage over global powers that are quickly closing the gap.

“The delivery mechanisms that we have created through the years were tuned to a different beat. That beat has got to change,” Hahn told reporters July 20 during the Naval Future Force Science and Technology Expo in Washington. “That requires behavioral changes, it requires maybe organizational changes, but more so I think it’s just a change in thinking.”

That change in thinking is outlined in the ONR’s new strategic framework, which Hahn said he hopes will deliver world class results.

The framework puts a bigger emphasis on working with industry and academia to rapidly absorb new technology.

Hahn said part of the reason the Navy is losing its technological advantage is because the technology being used by the U.S. military and its rivals is easily bought.

Anyone can go on Amazon, buy a drone and have it delivered to their door in two days.

“Because information is commoditized and it moves so quickly, the adversary has the same access to that information and that technology as we do. Lots of it comes from the commercial marketplace,” Hahn said. “Federal funding for research and technology has been flat for a long time. There are other institutional investors [including] academic institutions and foundations that when coupled with industry now provide the majority of funding for research here in the United States. That’s a different start point than we’ve had in our organization for a long time.”

Previous ONR strategies pinpointed areas of science and technology the Navy needed to invest in. Instead, Hahn’s new strategy calls for a broad base of connections to the technological and scientific community.

“Our framework, instead of a set series of technologies that are worth investing because we think that’s where we want to place our bets, is really going to cause us to think differently about how we are going to operate, not necessarily where we are going to invest,” Hahn said.

To do that ONR will ask program managers to look at who they are investing in and the speed by which technologies can be realized.

Hahn said the hope is once the Navy is in sync with academia and industry, the service will be able to move technologies as quickly as top commercial institutions or to swiftly follow another institution or country.

Doing that partly involves harnessing the large sea of data the Defense Department collects in order to give the Navy more insight and to make decisions faster.

Hahn likened ONR to a football team. Every team has a certain amount of money they can spend on players, but what makes a team truly great is the chemistry from the front office all the way down to the waterboy.

Hahn said ONR has the best scientists and engineers and should have “world class outcomes.”

Hahn said creating that chemistry involves working with who ONR is delivering its product to and not just handing over a system to the owner.

The Navy is trying to offer more mature solutions and then devise a method to partner with the owner of the product to bring it to full capability. 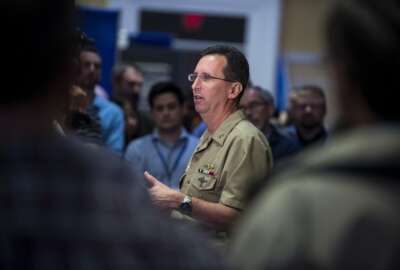 ‘The future is here today’ at ONR