Giving troops a pay raise might be hurting the military

The 2019 budget proposal, if enacted, would give service members their biggest pay raise in eight years, a 2.6 percent increase in pay. But despite how good it sounds in the headlines, an across-the-board pay raise may not be what the military needs right now.

The military already saw a 2.4 percent pay increase request for 2018, and as military personnel costs are rising, some experts...

The 2019 budget proposal, if enacted, would give service members their biggest pay raise in eight years, a 2.6 percent increase in pay. But despite how good it sounds in the headlines, an across-the-board pay raise may not be what the military needs right now.

Jim Perkins, former executive director of the Defense Entrepreneurs Forum and an Army reservist, says military pay is outpacing the inflation rate and civilians doing the same job, education and experience as troops are only paid 83 percent to 90 percent what service members are paid.

Service members are at an even bigger financial advantage because of housing and food subsidies through basic allowance for housing (BAH) and commissaries.

The study stated the Defense Department could save $25 billion over 10 years if Congress issued more reasonable pay increases.

A Feb. 5 Congressional Budget Office report stated personnel costs have increased 46 percent since 2000. A total of 42 percent of that growth is from BAH and basic pay.

Perkins thinks the across-the-board raises are harmful to the military’s search for talented individuals, while keeping less motivated individuals in the service.

“As much as I want to say paying the military more is great. It’s not necessarily,” Perkins said. “Throwing money at this problem is not going to solve it or not in the way that we want it to be solved.”

Perkins used a personal example to explain. An officer he knew was laid off from the Army after being passed over for promotion from captain to major. He left the military and couldn’t find equivalent compensation in the civilian sector based on his experience. He ended up joining the reserves and became an activated reservist for a year. He was promoted to major in the reserves.

“Now he is doing the same job as an active-duty captain, but getting paid more to do it as a major. A role for which he was previously deemed not qualified and the whole reason he was doing this was the fact that he couldn’t be paid as well if he wasn’t in the military,” Perkins said. “This epitomizes the fact that for the low performers in the military, if they stay in the military they may be staying because they’re afraid of losing this wonderful paycheck and benefits package.”

On the other hand, high-performing service members feel their effort is not being compensated; instead they are getting the same treatment as a low-performer for doing more work.

High performers “are seeing their hard work and talent is not being rewarded and differently than the lazy shirker who is sitting next to them,” Perkins said.

Those high performers can easily find jobs in the private sector that will pay them the equivalent compensation and benefits or much higher.

Perkins added that in the few exit surveys the military conducts, troops say pay is not the reason they are leaving, but rather the rigidity of military life.

Perkins suggested more flexibility in how Congress pays people in the military.

“We need to be able to compensate and reward people for taking on different roles that are more highly demanded or places that are bigger hardships. We need to have more flexibility in how we retain very specific skill sets,” Perkins said. “Raising pay across the board doesn’t necessarily do anything to solve the specific problems of a pilot shortage.”

The military is catching on to this as it watches some of the most needed employees like pilots, cyber experts and people trained in nuclear skills.

The military is offering modest bonuses to pilots and other occupations and creating some programs to make the work-life balance more flexible.

But, not many have caught on or are still in the pilot phase.

Meanwhile, the military is missing out on talented individuals it needs.

“Propensity to serve is declining, and each of the services, as well as the civilian sector, are vying for the same limited talent pool. We are clearly in a war for talent. Current forecasts based on leading economic indicators suggest difficult times ahead,” Vice Adm. Robert Burke, the deputy chief of Naval Operations of Manpower, Personnel, Training and Education, told the Senate Armed Services Committee on Feb. 14.

Military pay may be one of the issues hurting the effort.

Paying the military more across the board “is reflective of the divide and the guilt that exists between the civilians and the military. They don’t need to be paid more for what they’re doing and throwing money at this problem is not the way to solve it. Don’t say ‘Thank you for your service’ and then not realize we are sending troops to Niger. Don’t throw more money at the problem, get involved in the process,” Perkins said. 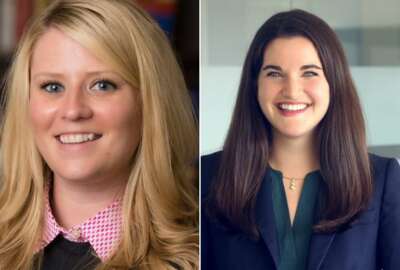