TRANSCOM said Monday its acquisition officials and legal counsel had spent the past two weeks reexamining the award decision in light of two protests losing bidders had filed at the Government Accountability Office. In the end, they decided the very claims that caused the command to pull the contract back for corrective action were “unsubstantiated.”

Officials said they started the corrective action process in response to claims by one of the protesters who charged that ARC, the winning bidder, had failed to disclose “adverse information” about its parent company, Norway-based logistics company Wallenius Wilhelmsen. However, after consulting with ARC officials, TRANSCOM evidently determined its original award decision was on sound legal footing.

Nonetheless, it is out of the ordinary for a federal agency to handle a bid protest by declaring it will take corrective action, only to decide not to take any corrective action at all, said Joe Petrillo, a government contracts attorney with the law firm Petrillo & Powell.

“It is unprecedented in my experience and certainly unusual, if not rare,” he said.

It remained unclear Wednesday whether the original protestors, Homesafe Alliance, and Connected Global Solutions, would seek to re-file their protests at GAO.

It was also unclear precisely what “adverse information” was at issue in the original protest. However, all three bidders have varying degrees of legal difficulty in their backgrounds.

Three of Wallenius Wilhelmsen’s current former executives were indicted in 2017 for an alleged bid rigging scheme involving oceangoing cargo, and the company plead guilty earlier this month to separate charges of “cartel conduct” brought by the Australian government.

One of Homesafe’s parent companies, Kellogg Brown & Root, has been a defendant in several criminal and civil cases alleging misconduct, including a Foreign Corrupt Practices Act bribery prosecution for which it paid a $402 million fine in 2009, and several civil cases stemming from its work on the Army’s LOGCAP III contract.

And in 2012, a sister company of Crowley Technical Services — Connected Global Solutions’ parent company — was fined $17 million in a criminal case alleging it conspired to fix prices for freight shipments to Puerto Rico.

TRANSCOM wants to use the procurement, called the Global Household Goods Contract (GHC) to “transform” the way the military moving system operates.

The current system is somewhat ad-hoc: 42 separate regional DoD offices hire private companies on a move-by-move basis. Under the GHC contract, the TRANSCOM is aiming for a more centralized process in which a single managed service provider sets up long-term relationships with moving companies — in theory, giving DoD better ways to manage supply and demand in the moving industry.

“The Global Household Goods Contract improves access to — and management of — quality capacity to meet peak demand and enable the department to affix the accountability and responsibility lacking in today’s program,” the command said in Monday’s statement. 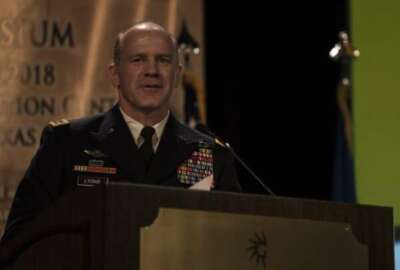