In March, the military announced that its space fence is fully operational and can now track items that are 10 centimeters or larger in size. Now, the military service in charge of space as a warfighting domain is looking for some garbage-astronauts to take out the trash.

Leaders of the Space Force’s Rapid Capabilities Office (SRCO) and Space and Missiles Systems Center (SMSC) said Wednesday that they are interested in ways the commercial sector can...

In March, the military announced that its space fence is fully operational and can now track items that are 10 centimeters or larger in size. Now, the military service in charge of space as a warfighting domain is looking for some garbage-astronauts to take out the trash.

Leaders of the Space Force’s Rapid Capabilities Office (SRCO) and Space and Missiles Systems Center (SMSC) said Wednesday that they are interested in ways the commercial sector can help the military with junk floating around the Earth’s orbit.

“Space debris is already a national security space issue. You’ve probably heard Department of Defense leaders talk about space not only being contested, but also congested,” Lt. Gen. John Thompson, SMSC direction, said during an American Institute of Aeronautics and Astronautics event. “I anticipate that in the commercial sector, and in the national security space sector, that orbital debris mitigation will become a huge effort going into the future.”

Thompson added that as spacecraft of the future continue to develop and become easier to use and to attach robotics to, space debris cleanup will be something that will become less expensive and even more interesting to the Space Force.

Mike Roberts, SRCO director, said another burgeoning industry will be reducing the amount of trash spacecraft and satellites create.

“Understanding space debris goes into every calculation of the systems we build today,” Roberts said. “We’re definitely interested in reducing that debris as we design and build our systems.”

NASA estimates there is about 17.6 million pounds of objects floating around the Earth. That comes out to about 26,000 pieces of satellites, rocks, screws, rocket boosters and many other harmful objects.

As commercial and government satellite launches increase, so does the waste.

Those objects, which move at speeds of up to 15,000 mph, can cause serious damage to working space assets moving around the planet.

In 2015, Object No. 36912 posed a serious risk to the International Space Station by coming uncomfortably close and causing the residents of the station to shelter in place.

The object was a piece broken off from a Soviet weather satellite that was launched In 1979. The New Yorker memorialized the tense moments aboard the ISS in a recent article.

In 2009, two satellites collided causing 800 pieces of space debris to fling out around the Earth’s orbit and put working assets in danger.

The problem has gotten so bad that a panel hired by the National Oceanic and Atmospheric Administration said space situational awareness and traffic management data are a public good and recommended a government entity disseminate the data for safety.

“Such a dynamic landscape requires an operating model with certain key characteristics and a space traffic management agency that is a coordinator and a catalyst,” the National Academy of Public Administration panel members wrote. “It should be a network-based organization that connects the different actors across the space economy through a shared interest in safety and sustainable use of orbital space. It needs to monitor and track the evolution of the enabling capabilities and foster innovation in the ecosystem. To be successful, the space traffic management agency needs to have an enterprise view of the dynamic and evolving space traffic management landscape.”

For now, the military has its space fence, which tracks all of the debris and helps space assets do their best to avoid collisions.

“The Space fence is revolutionizing the way we view space by providing timely, precise orbital data on objects that threaten both manned and unmanned military and commercial space assets,” Chief of Space Operations Gen. Jay Raymond said in a statement back in March. “Our space capabilities are critical to our national defense and way of life, which is why the space fence is so important to enhance our ability to identify, characterize and track threats to those systems.” 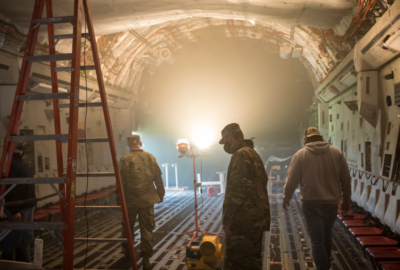