After four years of steadily increasing budgets for the Defense Department, Congress and the Biden administration are expected to do some belt tightening after spending trillions of dollars in COVID-19 relief.

Senate Armed Services Committee Chairman Jack Reed (D-R.I.) said he thinks the budget will remain fairly similar to the more than $740 billion DoD got for 2021, but that doesn’t mean that the department will not be able to accomplish its goals.

“We won’t be looking at the same percentage increases as we saw in the last few years,” Reed told reporters at a Defense Writers Group event on Wednesday. “We’re going to deal with a much tighter budget going forward. More flat. We have to make judicious calls about what is worthwhile to spend money on. We are going to look at and we are going to have to justify whatever we put in the budget.”

That being said, the political realities will force the committee to make some tough deals. Democrats have just a 10-vote majority in the House, and the Senate is split 50-50, with the vice president as the tiebreaker.

“We’re going need a bipartisan support,” Reed said. “There will bee the individuals on the right, who are would urge significant increases that are never enough. Then others on the left would say DoD needs to be significantly cut.”

Last year, Sen. Bernie Sanders (I-Vt.) proposed an amendment that would cut military spending by about $75 billion. That money would instead be invested in infrastructure, building sustainable energy, creating community health centers and hiring more teachers. The amendment failed, but stirred up debate on funding priorities.

It should be noted that DoD does not have a clean audit and cannot fully account for all the money it is given.

“Both sides are going to recognize, more than [a] majority of them, and recognize that we have to continue our investment in national security and defense,” Reed said.

To offset some of the cuts, Reed said he’d like to take up some money saving ideas that have not gotten much traction in Congress before.

One is to find better ways to manage commissaries and PXs by consulting large enterprises like Walmart or Costco.

Of course, there are also the old legacy systems that Congress keeps around, which could be cut as well.

“There are weapons that all the services have asked us to eliminate,” Reed said. “There is a certain reluctance because they’re stationed in our home states; they have an impact. We’ve got a look at that. If there’s a tighter budget then we have to look harder. That’s one of the realities.” 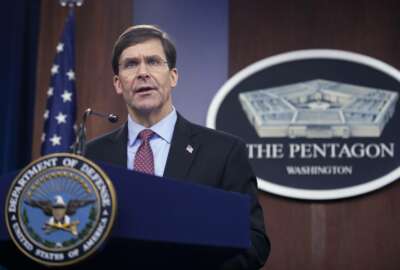