If you want to sell something to the Defense Department, make sure it can help kill someone.

That’s what Acting Defense Undersecretary for Acquisition, Logistics and Technology James MacStravic says the Pentagon is prioritizing under the new administration.

MacStravic shed some light on the inner workings of the Pentagon’s acquisition office since President Donald Trump took office. The Pentagon has been fairly quiet, mainly because it’s almost completely devoid of any political appointees.

If you want to sell something to the Defense Department, make sure it can help kill someone.

That’s what Acting Defense Undersecretary for Acquisition, Logistics and Technology James MacStravic says the Pentagon is prioritizing under the new administration.

MacStravic shed some light on the inner workings of the Pentagon’s acquisition office since President Donald Trump took office. The Pentagon has been fairly quiet, mainly because it’s almost completely devoid of any political appointees.

Defense Secretary James Mattis is focusing on lethality in the way he buys anything, MacStravic said during a June 1 speech at an AFCEA event in Vienna, Virginia.

“If I can’t discuss an acquisition issue in the context of lethality, I have immediately lost the secretary’s interest. His first question every time I bring an acquisition question, opportunity, investment decision to him is, ‘Tell me again how this contributes to lethality,’” MacStravic said.

Carter pushed for technologies that would make the military technologically superior to adversaries in the future. He pushed DoD’s Third Offset Strategy, which invested in things like artificial intelligence and man-machine learning.

Carter also set up the Defense Innovation Unit Experimental, a business hub that reaches out to small and innovative companies.

Mattis seems to be more in line with Republican lawmakers, who are pushing for a military that can project power now.

“We have this debate with the Obama administration all the time. You can have a more capable ship, but it can still only be in one place at one time. You have to have numbers to cover geography and these days, when you have such a huge array of threats. … There is no substitute for numbers,” House Armed Services Chairman Mac Thornberry (R-Texas) said before Trump took office.

Now it seems the tables have turned in the direction of a larger capacity military now, than one that will be more advanced in the future.

That isn’t to say Mattis is ignoring the capability issue. He’s continuing most of Carter’s innovation initiatives.

Mattis is also moving forward with DoD’s requirement from Congress to split the acquisition office in order to facilitate research and prototyping.

MacStravic said he had an initial meeting with Congress two weeks ago on the split and DoD is now preparing a report for August.

Acting Navy Secretary Sean Stackley is leading the reorganization effort. He is heading three cross-functional teams that encompass research and development, the future of acquisition and management.

“There are enough permutations in how you arrange the building blocks that we want activities to inform structure … We’re not expecting the services to break up [their acquisition offices], but we’d like to be predictable and transparent to them and know who to call when they have this particular problem,” MacStravic said. “We are putting together the phonebook, really.”

The law requires DoD have an undersecretary of acquisition for research and engineering and another for day-to-day acquisition policies.

“How many corporations in the world actually have the acquisition and the engineering folded in under one organization? The answer is none, actually. The reason is because they are two different skill sets, two different culture characters between engineering and acquisition. The attempt here was … to spur innovation and things like that,” a House Armed Services aide said.

Mary Miller, acting assistant defense secretary for research and engineering, expanded on what the roles mean during an April speech.

“We wanted to create two undersecretaries [for acquisition]. One, the undersecretary for research and engineering that is really focused on maintaining technology superiority across the globe. It is risk-taking, it will do prototyping, it will do experimentation. It will allow and challenge the Defense Department each and every step along the way to think differently, to think large, to think future,” Miller said. “And then there was the undersecretary of acquisition and sustainment, which will focus on affordability, efficiencies, getting things to the warfighter faster and making sure it is the right things.”

Miller said there will be a natural tension between the two offices. One is about creating risk, while the other is about mitigating it.

The challenge goes beyond simply reorganizing the offices, it deals with changing the culture within the new offices as well.

“The workforce is uncomfortable. They don’t know what it means and we haven’t been able to tell them much because the secretary is still kind of saying, ‘Do I like this plan? Do I not like this plan? What do I really want to do?’” Miller said. 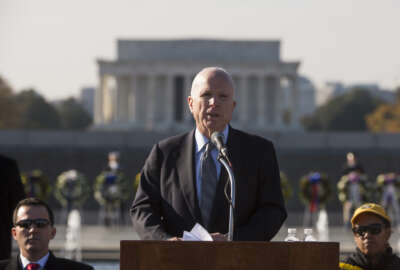