Sweeping changes to the Defense Department’s structure in the name of innovation along with cuts to Senior Executive Service staff characterize the Senate version of the 2017 Defense authorization bill.

Along with the reforms, the bill fully funds the defense budget at $602 billion. But, Senate Armed Services Chairman John McCain (R-Ariz.) will ask for more defense funds in the form of an amendment when the bill goes before the full Senate, said a committee...

Sweeping changes to the Defense Department’s structure in the name of innovation along with cuts to Senior Executive Service staff characterize the Senate version of the 2017 Defense authorization bill.

Along with the reforms, the bill fully funds the defense budget at $602 billion. But, Senate Armed Services Chairman John McCain (R-Ariz.) will ask for more defense funds in the form of an amendment when the bill goes before the full Senate, said a committee staffer.

“When the bill comes to the floor, I think for Sen. McCain’s standpoint, there will be a desire to see whether there is support in the Senate for additional defense spending,” the staffer said.

The bill does not try to perform the budget acrobatics of the House version of the bill by using $18 billion in overseas contingency operations spending — a war fund not beholden to sequestration limits — to pay for active duty troop increases and a higher military pay raise.

Carter said the plan was “deeply troubling and flawed.”

“It buys one year of force structure without the money to sustain it and keep it ready, effectively creating hollow force structure and working against our efforts to restore readiness,” Carter said. “And it does not address the much bigger strategic risk DoD faces of $100 billion in looming automatic cuts.”

Critics of the House bill say the plan stops war spending halfway through 2017, forcing Congress to approve another spending bill by next April.

The disparity between the two versions of the bill could lead to a legislative battle if the bills make it to conference.

While the Senate version of the bill doesn’t make any big changes in budgeting, it does attempt to completely overhaul DoD’s acquisition office.

The bill would completely do away with the undersecretary of defense for acquisition, technology and logistics, a position responsible for more than $160 billion in procurement and research funds.

Instead, the office would partly be absorbed by the undersecretary of defense for research and engineering (USD R&E).

USD R&E would be responsible for oversight of weapons development and focus on where the department is going in terms of technological goals and innovation.

Under USD R&E an acquisition policy position would be created. That position would be in charge of “setting defense-wide acquisition and industrial base policy and overseeing the development of weapons and national security systems by the military services,” said a May 12 committee press release.

A position created in a previous authorization act, the undersecretary of defense for management and support, would handle more of the everyday, business side of acquisition. The office would be a line office that helped run defense agencies that perform critical business operations.

In short, the bill frees the research and development parts of acquisition to focus on innovation, while the business management secretary makes sure the trains run on time.

“This USD R&E position builds upon and updates the old USD R&E, a once-powerful position that helped to lead the development of stealth, precision guided munitions, and other advanced capabilities as part of the so-called ‘Second Offset’ strategy during the Cold War,” the release stated.

Committee staffers said the change was a nature move after last year’s NDAA wrested some procurement authority from the acquisition office and gave it to the military service chiefs.

The new assistant secretary of acquisition policy would act as an overseer of the service’s R&D and procurement. The position would advise and assist and only engage when military services begin to go off the rails, a staffer said.

USD R&E is responsible for laying out the vision for the services to work toward. Other innovation agencies like the Defense Advanced Research Projects Agency and the Missile Defense Agency will report directly to USD R&E.

As for the current acquisition office, a committee staffer said, “No one should view this as a comment on the performance of [Undersecretary of Defense for Acquisition, Technology and Logistics Frank] Kendall. … He’s doing a good job as AT&L.”

As acquisition gets a makeover, the Joint Staff and combatant commanders will see changes too.

The bill clarifies the duties of the Chairman of the Joint Chiefs of Staff, giving him more ability to assist the Defense Secretary with global integration of military operations and activities that stretch across multiple combatant commands.

That’s something Carter and Chairman of the Joint Chiefs of Staff Gen. Joseph Dunford lobbied for earlier in the year.

Another provision creates a Combatant Commanders Council to aid in the execution of defense strategy and global integration of military activities across the combatant commands’ areas of responsibility.

“This is increasingly important in light of the fact that all of our major worldwide threats span multiple COCOM areas and domains of responsibility and require their seamless integration,” the release states.

Much like the House bill, the Senate version caps the size of the National Security Council’s staff at 150.

The bill reduces the number of general and flag officers by 25 percent, something the House bill also did. The number of four star officers was cut from 41 to 27.

Senior Executive Service civilian employees would be cut by 25 percent.

Additionally in a continued attempt to cut DoD’s headquarters spending and staff, a provision enforces caps on military and civilian headquarters personnel. The bill would only allow a 15 percent increase over the cap in times of a national emergency.

Headquarters contractors would feel the pinch too. A provision caps the amount of money the Office of the Secretary of Defense and the military departments could spend on contractors performing headquarters staff functions.

The baseline would be set at 2016 levels of contractor spending and require a 25 percent cut by 2018.

The bill addresses TRICARE as well, but committee staff said they would go into the details at a later date.

The release stated the Senate NDAA expands telehealth services, consolidates the number of TRICARE plans and expands urgent expands eligibility for care in military treatment facilities to veterans and some civilians. 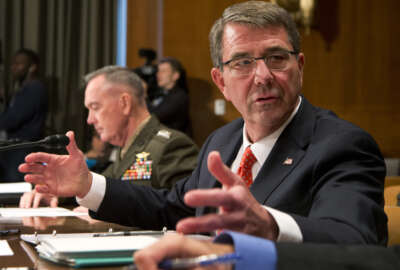