Transgender individuals may now serve openly in the military and will be able to seek medical treatment while serving.

The U.S.  joins 18 other countries in its allowance of transgender service members.

The Defense Department announcement affects between 4,000 and 11,000 active duty and reserve personnel.

“Although relatively few in number, we’re talking about talented and trained Americans who are serving their country with honor and distinction. We invest hundreds of thousands of dollars to...

Transgender individuals may now serve openly in the military and will be able to seek medical treatment while serving.

The U.S.  joins 18 other countries in its allowance of transgender service members.

The Defense Department announcement affects between 4,000 and 11,000 active duty and reserve personnel.

“Although relatively few in number, we’re talking about talented and trained Americans who are serving their country with honor and distinction. We invest hundreds of thousands of dollars to train and develop each individual, and we want to take the opportunity to retain people whose talent we’ve invested in and who have proven themselves,” Defense Secretary Ash Carter said during a June 30 speech at the Pentagon.

The new policy is just the latest in a series of changes that have made the military more inclusive. In the past five years, the military has repealed “Don’t Ask, Don’t Tell” and made women eligible for combat positions.

Carter said DoD is trying to make sure it has access to 100 percent of the nation’s population for military recruitment and retention.

He added that as a principle transgender individuals should be able to serve in the military.

“Americans who want to serve and can meet our standards should be afforded the opportunity to compete to do so,” Carter said. He then quoted Army Chief of Staff Mark Milley, “The United States Army is open to all Americans who meet the standard, regardless of who they are.”

In addition to acceptance of transgender individuals in the military, it is now DoD policy that any service member in the process of gender treatment will be provided medical care and treatment.

That includes transgender people who want to undergo treatment and are in the military.

Transgender individuals must meet with a military doctor and have their transition deemed “medically necessary” to be eligible for treatment.

Transgender service members will still be deployed even while undergoing treatment as long as it is cleared by a doctor.

As for those who are transgender and want to join the military, DoD is planning full integration of transgender policy by July 2017. That policy will require transgender recruits to have a military doctor certify they have been stable in their identified gender for at least 18 months.

DoD is looking into how TRICARE can provide transgender treatment to beneficiaries of service members as well.

DoD will also release a commanders’ guidebook in the next three months for those leading transgender service members.

“Over the 9 months that follow, based on detailed guidance and training materials that will be prepared, the services will conduct training of the force, from commanders, to medical personnel, to the operating force and recruiters,” Carter said.

Reactions from Capitol Hill on the policy have been mixed.

“This is the latest example of the Pentagon and the President prioritizing politics over policy,” House Armed Services Committee Chairman Mac Thornberry (R-Texas) said in a statement. “Our military readiness — and hence, our national security — is dependent on our troops being medically ready and deployable. The Administration seems unwilling or unable to assure the Congress and the American people that transgender individuals will meet these individual readiness requirements at a time when our Armed Forces are deployed around the world.”

“This policy is an important step toward ensuring that our military is strong and inclusive,” Smith said, in a statement. “It will protect the rights of transgender individuals who already serve in the U.S. armed forces, with minimal impact on the operations of the Department of Defense. … By providing clarity for the service branches and removing an obsolete policy that has made it more difficult for our men and women in uniform to do their jobs, this policy will strengthen, not reduce, the military’s ability to defend the United States.”

“With today’s historic decision, the U.S. military has taken a sweeping step to advance readiness,” said Aaron Belkin, Palm Center director. “In ending discrimination that had no basis in medical science or military necessity, Secretary Carter is enhancing readiness as well as core values of honesty and integrity, an enormous accomplishment with a durable impact on all service members.” 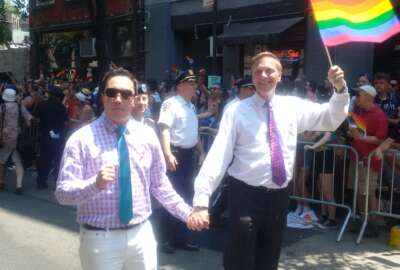