The chiefs of the Army, Navy, Air Force and Marine Corps are all taking time from their day jobs this week to testify about why it’s important that Congress actually pass a budget for 2017, now that five months of the fiscal year have elapsed.

They’ll be speaking to a sympathetic audience: the House Armed Services Committee, and via brief information sheets they sent to Capitol Hill in advance of the hearing, each of the military services have already provided a few salient details about what would happen under a full-year continuing resolution. The funding contingencies they describe are somewhat similar to the measures the military took in March of 2013, when sequestration suddenly left the Defense Department and other agencies with billions of dollars less than they were planning on, midway through a fiscal year.

The Navy, for example, would cut back flight hours across all of its aviation operations. Four of the nine carrier air wings that aren’t already deployed would be shut down entirely, and about a third of the Navy’s newest pilots wouldn’t be able to finish their initial training. That would leave squadrons undermanned by 20-to-30 percent by the end of the year, causing shortages that the Navy said would have ripple effects for the next several years.

The military services have already made clear that a full-year CR would almost certainly force them to extend what was supposed to be a 90-day hiring freeze for the rest of the year, but it would affect uniformed personnel too, according to the documents.

If Congress does indeed default to a continuing resolution for the remainder of the year, it could opt to reallocate some funds through “anomalies” that would blunt the impact to things like military pay without altering the top-line amount in the CR, but that would only increase pressure on operations and maintenance accounts — the areas of the budget where it’s most feasible to cut the military’s spending rate during a fiscal year that’s already halfway over.

As the Air Force put it in its fact sheet, “You are forced to go where the money is and the accounts you can slow down quickly.”

In the Air Force’s case, even before any anomalies, a full-year CR would cut its planned O&M spending by $2.4 billion midway through the year — $1 billion of that would come from cuts in aircraft and engine maintenance; another $600 million would come from reduced flying hours.

The Navy would deal with the O&M problem by cancelling 14 scheduled depot maintenance periods in shipyards that are already failing to keep up with demands (one nuclear attack submarine, for example, the USS Boise, is already scheduled to spend at least the next two years at a pier, waiting for maintenance before it’s allowed to submerge again). The same is true in aviation depots: the Navy says only one-third of its aircraft would be fully mission capable by the end of the year.

In their version of the memo to lawmakers, Army officials noted that procurement would also be a major issue for the rest of the fiscal year.

Under a CR, new acquisition programs are prohibited across the board, but beyond the 47 new programs the Army has already postponed while it awaits a 2017 appropriations bill, it would also have to stop previously-planned quantity increases for systems Congress has already authorized. There are 84 of those, ranging from small-caliber ammunition to surface-to-air weapons systems. 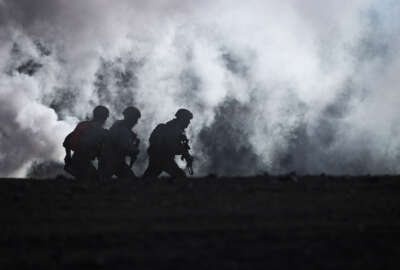