The Army has already begun to merge its cyber and electronic warfare functional areas, based on the belief that the two disciplines are so interdependent in modern warfare that they’re better-managed as one.

But that may have been only the first step. The new commander of Army Cyber Command believes that if some integration is good, more is better. He said it’s time to think seriously about absorbing other historically-distinct mission areas — or “tribes”...

The Army has already begun to merge its cyber and electronic warfare functional areas, based on the belief that the two disciplines are so interdependent in modern warfare that they’re better-managed as one.

But that may have been only the first step. The new commander of Army Cyber Command believes that if some integration is good, more is better. He said it’s time to think seriously about absorbing other historically-distinct mission areas — or “tribes” — including information operations.

“Cyber Command was probably the appropriate term on 21 May of 2010, when Gen. [Keith] Alexander stood it up, and we stood up Army Cyber Command about a month later. But I think we’re well past that now,” said Lt. Gen. Stephen Fogarty, who assumed command of Army Cyber in May.

“I think you’re going to see the same thing up at Fort Meade for U.S. Cyber Command, or at least that’s what I will advise,” he said. “Because what I’ve really tried to do is distill the lessons we’ve learned from operating in the cyber domain alongside those that are operating in the information environment. And what I’ve come to believe is that frankly, the overlap is much deeper. It’s much greater than just kind of these bumps in the night, and the next stage of this is actually bringing all of that together.”

Fogarty said his views were informed, at least in part, by the fact that existing adversaries are already combining cyber and information operations, even if they don’t have specific military doctrine or career categorizations that describe those distinctions in the way the U.S. military does.

“ISIS came on the scene very rapidly, and part of their power was their ability to hit a global audience, be able to inspire recruits, be able to make themselves look much larger than they were. And this was an instance where they use social media, they used cyber to really promote their IO message, and that was an important part of their toolkit,” he said. “What they’re able to do is actually take that narrative and as long as they can keep it alive, frankly our kinetic effects in theater will not be able to completely destroy them.”

The Army has already said that it will begin to formally integrate its electronic warfare career field (“functional area 29”) with its cyber counterpart (“functional area 17”) this year. By October, soldiers from the formerly-separate disciplines will begin training together at the same schoolhouse at the Army Cyber Center of Excellence at Fort Gordon, Georgia.

But Fogarty said the Army needs more convergence in order to quickly move through an information chain he formulates as: “Sense, Understand, Decide, Act.”

“Whoever can do this faster than their adversary will enjoy a decisive advantage. It doesn’t matter you’re the commander on an Abrams tank or an Apache helicopter or you’re a cyber defender,” he said. “I’ve got to be able to sense what’s going on in the environment, and it can’t be limited to just the cyber domain, I have to understand what’s going on in the entire information environment. Then I have to create understanding, which is very different than situational awareness: As a commander, I’ve got to understand my framework and tell you how to array your sensors.”

In that formulation, Fogarty said he doesn’t have many concerns about commanders’ ability to decide how to interpret the information they’ve received, but does worry about the Army’s ability to act quickly.

“We have become enamored with process, and I think it takes us far too long to act on what we’re seeing, what we understand, what we decide,” he said. “Right now, we’re in a race — and we’re in a race with pretty sophisticated adversaries. So this notion of speed is very important.”

By “sophisticated adversaries,” Fogarty means large nation states, including Russia and China, highlighting the need to also integrate the military’s intelligence capabilities with its cyber operations.

“How long did it take us to understand what the Russians did in 2016 to the elections? They were moving a lot faster than we were,” he said. “We were occupied on an adversary by the name of ISIS and the Russians were focused on an adversary called the United States of America. … We were much slower, I believe, to sense, understand, decide and act, and we cannot afford to place ourselves in that position in the future.” 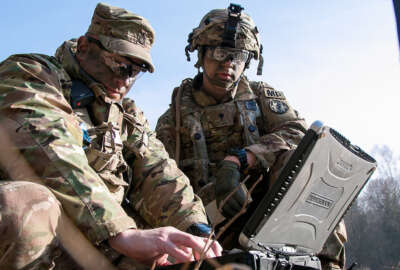