Want to see the office space of the future? GSA wants to show you the way

HERSHEY, Pa. — The General Services Administration is offering agencies a glimpse of what the future of work could look like.

Starting in early November, GSA will open up its shared work spaces in three cities as well as its future of work headquarters laboratory.

Robin Carnahan, the administrator of GSA, said Oct. 24 at ACT-IAC’s 2022 Executive Leadership Conference that GSA is helping agencies envision how their employees will work differently in the coming...

HERSHEY, Pa. — The General Services Administration is offering agencies a glimpse of what the future of work could look like.

Starting in early November, GSA will open up its shared work spaces in three cities as well as its future of work headquarters laboratory.

Robin Carnahan, the administrator of GSA, said Oct. 24 at ACT-IAC’s 2022 Executive Leadership Conference that GSA is helping agencies envision how their employees will work differently in the coming years.

“We have an indefinite delivery, indefinite quantity (IDIQ) [contract] that has been set up for just over a year with private co-working spaces to be able to provide these offerings to federal employees. But we want to shine a light on that,” Carnahan said in an interview with Federal News Network. “So the week of Nov. 14 is going to be a week where teams can show up, work for free in these private co-working spaces and just see what see what they think of it, see what the tools are that really make a difference for them and that might be effective going forward. We’re excited about that. We expect to learn a lot from that, and then we’ll take those learnings and figure out what to do next.”

GSA signed a deal with four companies — DeskPass Corporation, LiquidSpace, Novel/Expansive/Level Office Management, The Yard Operating Company and WeWork Commons — in August 2021 to provide space-as-a-service for federal employees. The contract is part of GSA’s Workplace 2030 initiative, a strategy that rethinks federal office space in light of the widespread adoption of telework during the pandemic.

Carnahan said GSA will provide these test runs of these co-workings only in three cities during the week of Nov. 14, Washington, D.C., San Francisco and Denver. She said GSA has plans to expand it to other cities if this initial effort goes well.

“The important thing is all of what we need to be doing is focusing on is how do we empower our workforce to do their best work?” she said. “We know that the world has changed. We know that workplace flexibility is a thing that’s important for our teams and both to retain talent and recruit new talent. It’s the thing that’s very serious for all of us. Every agency is dealing with it as well as the private sector.”

The one-week test also is about the future of office space for agencies. About 40% of all leases that GSA oversees will expire by 2026, forcing every agency to rethink their office space needs.

Carnahan said agencies are putting together their plans outlining their office space needs over the next five years. They are due by the end of 2022.

“Our teams working really, really closely across all of the cabinet agencies to work that out,” she said. “We also know that agencies are thinking more about sharing space, which you’ve been around for a long time hasn’t always been a thing on people’s minds. But now it is because they want to have an effective optimized footprint for the space that they have. We also know that all of this is going to look a little bit different depending on each agency. It’s not going to be a cookie cutter.”

“What are the buildings that we really think we need to have in our portfolio and want to keep and want to invest in and make them places where people want to come and work and which ones we need to dispose of? The level of seriousness of that conversation right now is very real,” she said.

In addition to the reviewing current office space needs, GSA is helping agencies rethink what the office space of the future will look like.

It is opening up its Workplace Innovation Lab at its headquarters building in Washington, D.C. for agencies to come in and test out different office configurations.

Carnahan said GSA is working with different office space furniture and other vendors to provide this opportunity.

“We know there’s going to be an important role for offices. We also know it’s going to have to look different than it looked in the past because people were just using office space in different ways and for collaboration spaces and other things, so to be able to have people try before you buy on that, I think is pretty smart,” she said. “We’ll see what people say. What I’m trying to encourage is the culture of experimentation to understand we’re living in some uncertain times right now, but we don’t have to be hamstrung by that. We can use it as an opportunity to see what new products can serve our agency partner customers well, and just begin to test those out in lightweight ways. So I’m really excited about that.” 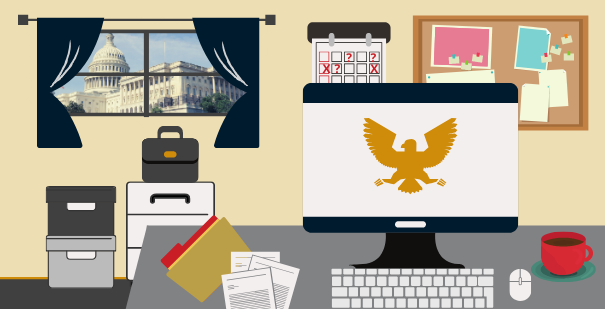